A A
Blog
Author(s): Fabian Schnell

What holds Switzerland together? Based on the latest debate about foreign languages in primary schools, the only conclusion is that it’s the teaching of a second national language before secondary school. If English were the sole foreign tongue with which our children were confronted in their first six years of school, the Swiss Confederation would sooner or later risk imploding. Fortunately, the federal government’s planned changes to language laws will prevent that – or at least that’s the idea.

Foreign language teaching in Switzerland is a pretty emotional thing. So it’s best to keep cool. First, remember teaching foreign languages at primary school is relatively new. Your author, for example, was, 20 years ago, among the first who supposedly profited from the introduction of early French by the canton of Zurich in Year 5. (The choice of words speaks volumes about the long term benefits of the experience) More important is the fact that national solidarity among Switzerland’s different language regions has lasted centuries, even without teaching a second national tongue at primary school.

Given this background, the attack on cantons‘ responsibility for education seems out of proportion. What’s particularly scandalous is the threatening posture towards the cantons developing at the federal ministry of internal affairs. Authority for education policy should of course remain with the cantons, says the government. But those regions than don’t “voluntarily” teach a second Swiss national language at primary school would be obliged to do so by federal law. That brings Henry Ford’s famous quote to mind: “Any customer can have a car painted any colour that he wants, so long as it is black.”

Limiting cantonal responsibility, alongside constitutional political issues, is justified by claiming it will reduce barriers to mobility. But the same argument could be used to question virtually every cantonal competence. It’s an essential element of federalism that regional differences be preserved. Only that way can “trial and error” procedures be possible, and only thus can there be real regional competition. Of course it’s hard for school kids to change systems, but the same would apply if a family moved abroad. Moreover, experience has shown school children are much more adaptable than politicians think. A centrally ordained set of language laws to some extent impedes our younger generation’s flexibility and ability to learn.

Even while respecting cantonal responsibility for education, it’s worth however taking a critical look at the current thinking behind foreign language teaching. No one questions that, by the end of obligatory schooling (at age 16 in Switzerland, ed) every Swiss-German youngster should have a basic knowledge of at least one other national language (generally French, though it would be desirable, for political reasons, to be able to chose Italian as an alternative) and English. But the aims for these two languages should be differentiated more clearly. Many schoolchildren have easier access to English (the world’s new “lingua franca”). It is part of daily life and often unstatedly essential in a career. This stark presence clearly increases youngsters’ motivation to learn. But the focus of English teaching should be on using the language as the basis for communication with the rest of the world. The cultural background of the Anglo-Saxon world is often not so prominent, and networking in a globalised world almost comes of itself. These arguments speak for integrating English early into primary school.

By contrast, teaching a second national tongue should have a different goal: to promote cultural understanding of a different part of our country. Of course, learning the language and gaining the ability to communicate must be primary aims. But gaining contact with literature, lifestyle and culture play a much bigger role. So the teaching resources used here should focus on the relevant part of Switzerland, rather than concentrating on France or Germany. Such a differentiated approach to learning aims suggests teaching a second national language should be postponed to secondary school, as students’ cultural appreciation requires a certain maturity. In return, teaching hours could be increased and combined with a multi-week exchange in the appropriate language region – also something that’s not really possible yet at primary school. 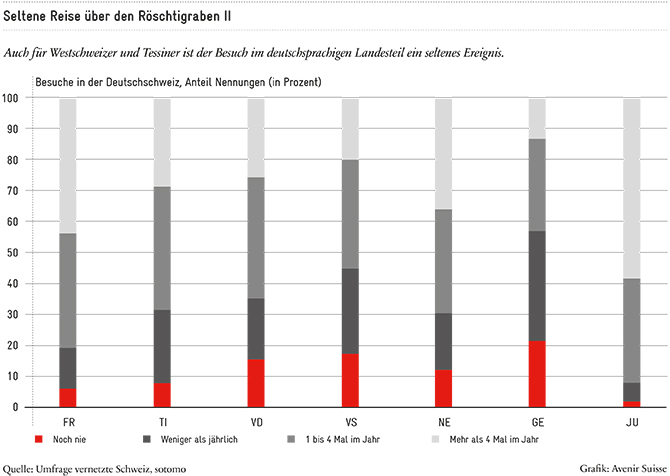 Considering a quarter of Swiss citizens from the (predominantly German speaking, ed) canton of Graubunden, and a fifth of those from (French speaking) Geneva have never spent time in a different Swiss language region, such a reorganisation of language teaching would contribute significantly more to mutual understanding than any French classes in primary school. Canton Thurgau is moving in a similar direction – insofar as it’s allowed.

Switzerland’s solidarity between its different language regions and its intercultural understanding are achievements the country can be proud of. Many other multilingual states look with a certain envy at how well our nation functions. There’s no question we must protect this solidarity and ensure it receives due respect during school years. Looking rigidly at the question of when to start teaching a foreign tongue hardly contributes to pedagogical cohesion. Au contraire, it hinders better and more imaginative solutions. It’s not without a certain irony that the federal government is trying to hamper these very qualities with an attack on federalism – one of the central success factors for the ability of Switzerland’s different language regions to work together so effectively.

Author: Fabian Schnell
Short Biography
What do you think about this topic? Give your to the authors.