“Baden-Württemberg Is just as Important to Us as China Is”

Simon Brunner: For many years, respondents to the Credit Suisse Worry Barometer survey have cited unemployment as their top concern. Why is that?

Peter Grünenfelder: The Swiss have a strong work ethic. This is evident from the number of hours they work each year – in Switzerland, people work 220 hours more than in Germany and 110 more than in France. Their work ethic is also reflected in their clear rejection of a 2012 initiative calling for six weeks of vacation. So the overwhelming majority of people attach great importance to avoiding unemployment, for both financial and social reasons. However, since an increasing share of unemployment is due to structural factors and tends to be unrelated to the overall economy, joblessness is a topic of constant concern in Swiss society.

When respondents were asked to name the country’s top priority, “economic growth” was mentioned most often, followed by “Old Age and Survivors’ Insurance (AHV)” and “family/jobs.” How do you explain those responses?

Economic growth is a major factor in ensuring and increasing everyone’s prosperity. It also helps achieve other political goals, such as funding AHV and combating (youth) unemployment. The global economic situation is in flux, not least because of Brexit as well as uncertainty about the future direction of US monetary policy. In Switzerland, too, it is not yet clear how political decisions will affect the economy; the implementation of the mass immigration initiative will be one factor in this context. I therefore agree that economic growth should be our highest priority. We need to focus particularly on boosting the productivity of the domestic economy, which is relatively weak.

Another finding points in the same direction: 70 percent of respondents believe that our economy rarely or never fails to perform properly – a higher percentage than ever before. Why do people have such confidence in the economy?

Confidence in general is high, not just in the economy, but also in our political system. It has to do with trust in the market and political institutions. This also explains why our country was able to overcome the financial crisis relatively quickly. Another factor is Switzerland’s fairly positive economic situation.

Sixty-eight percent of Swiss people – more than ever before – describe their own economic situations as very good or good. How is this possible at a time when the key economic indicators are less than ideal?

The OECD and SECO are predicting growth of 1.7 and 1.8 percent, respectively, for 2017, which is in the average range for the past twenty years. Moreover, real wages have increased, thanks to low and even negative rates of inflation in recent years. So Swiss households can afford to purchase more, or they have more money left over at the end of the month.

People in Switzerland know little about the Transatlantic Trade and Investment Partnership (TTIP), and opinions about it are divided. It’s interesting, however, that 41 percent of Worry Barometer respondents would favor a separate agreement with the United States. Is that realistic?

Responses about TTIP – whether people approve of it, and what should be done about it – should be viewed with caution, given the fact that 61 percent had never read, seen, or heard anything about it before the survey. Economists predict that TTIP would result in the creation of 400,000 new jobs in Europe and roughly a million in the United States. We should remember that in 2006 the Swiss agricultural lobby scuttled negotiations of a free trade agreement with the US even before they had really begun, squandering a unique opportunity. Since the parties negotiating TTIP, the US and Europe, are Switzerland’s most important trading partners, an agreement between them might put Swiss companies at a competitive disadvantage. It is therefore crucial that we try to join the TTIP. If this proves impossible, we need to do whatever we can to reach an agreement on free trade with the United States.

Right now Brexit is weakening Europe’s economic situation. The EU will be preoccupied with the departure of the United Kingdom and with its own affairs for the foreseeable future. Switzerland’s concerns will not be at the top of the priority list. So the period of uncertainty that began with the acceptance of the initiative against mass immigration is going to continue. The economic and political instability triggered by Brexit is also having a negative effect on the investment climate, putting a damper on economic growth. This is not helpful for Switzerland and its small, open economy. 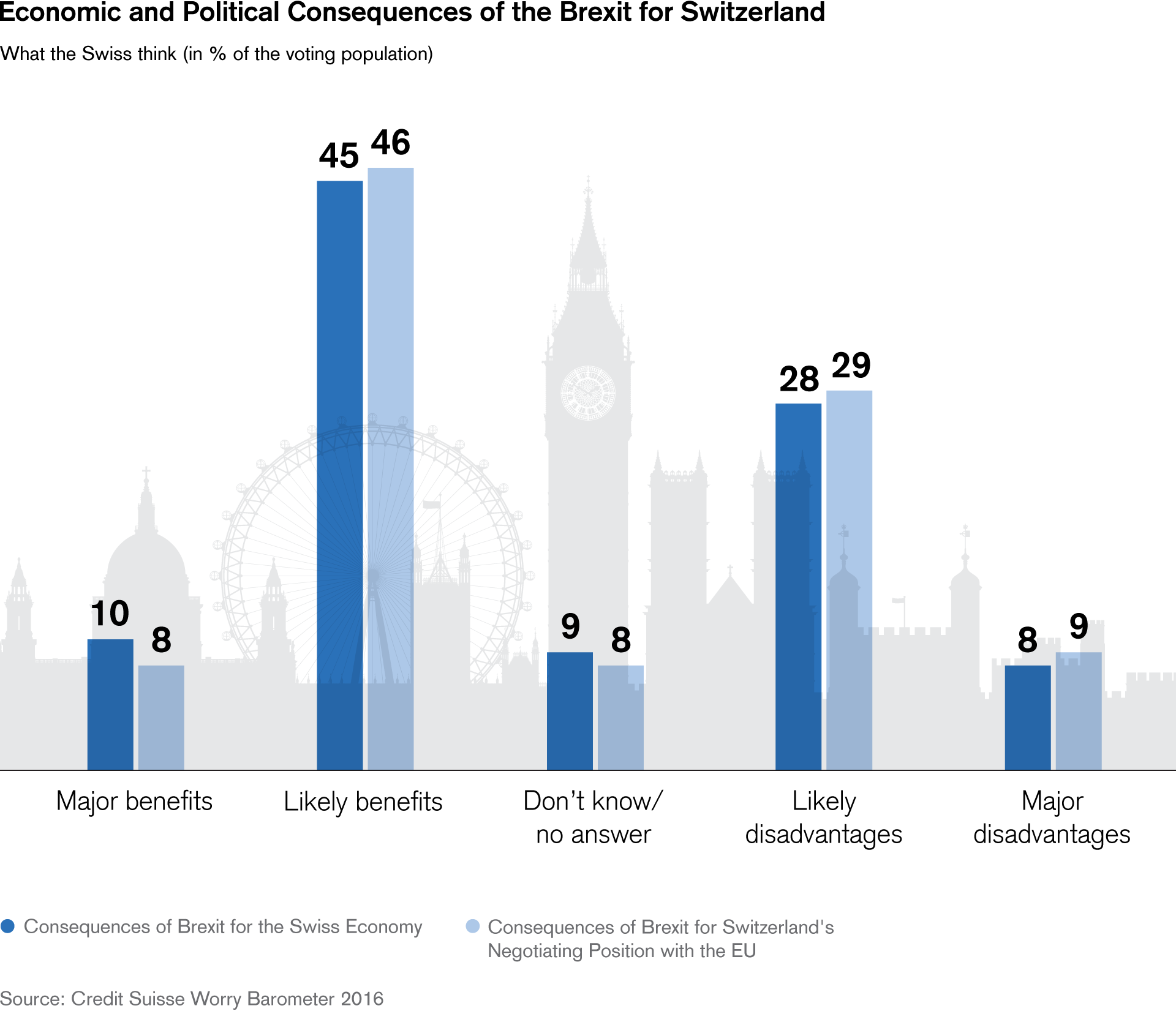 When asked to describe Switzerland’s economy, relative to those of other countries, more people than ever before chose the response “quite good” or even “very good.” Is there a danger that the Swiss fail to recognize how dependent our economy is on the countries around us?

The prosperity of each Swiss citizen depends in large measure on our economic ties to other countries – 70 centimes of every Swiss franc we earn can be attributed to those ties. It is crucial to remember that. In terms of trade volume, Baden-Württemberg is as important to us as China is, and Tyrol is as important as Canada. We must do everything in our power to prevent the erection of new borders – political as well as mental – because they would jeopardize our economic welfare.

Asked to name Switzerland’s strengths, since 2010 people have been mentioning the financial center more and more often. Seventy-seven percent say that they are very or quite proud of it. Has the reputation of the banks and insurance companies recovered from the financial crisis?

Switzerland’s financial industry is a flagship sector and exemplifies the international approach needed for our country’s continued success and expansion as a business location. I should also note that certain difficult and complex issues, such as our tax dispute with the United States, have been resolved in a professional way, and this has once again boosted confidence in the industry.

Strengthening the financial center first requires the capital market to be strengthened, according to 82 percent of respondents (the most common response). Do you share this view?

The availability of long-term sources of financing is essential for companies and for Switzerland as a business location, and thus also for our prosperity. So a strong capital market is not only crucial for a strong financial center, but also for the entire Swiss economy. A number of issues in connection with the capital market are currently on the political agenda. An attractive taxation and regulatory environment is of central importance. But when they passed the Corporate Tax Reform III package, lawmakers unfortunately failed to abolish the stamp tax. Meanwhile, it would benefit the financial center and further strengthen the capital market if access to foreign financial markets were improved. Action is still needed in this regard.

Survey respondents consider it nearly as important to strengthen financial technologies, or FinTech. Does Switzerland need to promote start-ups and innovation in general?

Switzerland’s policymakers should concentrate on creating the best possible framework conditions for innovation and start-ups, but leave financing to the business sector. However, we have a long way to go to achieve such conditions. It’s not very helpful to talk about the importance of start-ups in driving a technology- and knowledge-based economic renewal if, at the same time, the assets of start-up founders are penalized by the tax system, or when innovative companies complain that regulations are their biggest impediment. We need to create a legal framework that enables companies to act rather than putting obstacles in their path. In particular, steps need to be taken to ensure the availability of highly qualified workers. Crucial in this context is ensuring the free movement of persons, but also facilitating the hiring of top workers from third countries. If even stricter regulations are imposed on the labor market, Switzerland will become still less attractive to start-ups.

Where do you see the greatest threat to the successful Swiss model?

I worry about a trend toward isolation and “growth fatigue.” Switzerland is dependent on sound economic relations with other countries. This applies not only to the exchange of goods, but also to the movements of workers. If we jeopardize our positive relationships with the EU, by far our most important economic partner, this will have a direct impact on our country’s prosperity. Since the bilateral agreements took effect, per-capita income in Switzerland has increased each year by between 0.5 and 1 percent. That adds up to 50,000 francs in additional income for each individual since 2002. In other words, the earnings of every Swiss citizen have grown by nearly four-fifths of a typical annual salary. If all other bilateral agreements with the EU disappear along with the free movement of persons, Swiss companies will lose access to a market of over 500 million consumers and potential workers. With regard to growth fatigue: With all of the criticism of economic growth, we often forget how essential growth is to the functioning of our economic system and our society. We need growth to finance our social welfare systems. Technological advances also generate growth – and surely few of us would want to do without such advances, however we may feel about economic growth in general. We therefore need to continue to remind people of certain economic truths.

How can our country remain successful?

Avenir Suisse is focusing on five drivers of prosperity that we consider essential to our country’s success, both now and in the future. First of all, we need an economically open Switzerland that gives our companies access to the European and world markets. Second, we need efficient infrastructures, less regulated markets and an energy and transport policy that is geared more closely to the market, and we should privatize public companies unless there are urgent reasons why they need to be publicly held, such as in the case of the power companies and the cantonal banks. This will also minimize the risk to all of us as taxpayers. Third, we urgently need to work toward a comprehensive reform of the welfare state so that it will be affordable over the long term, given demographic trends. This will require political courage. Fourth, we need smart government, with less redistribution, competition within our federalist system, a more effective use of tax revenues, and a more appropriate division of responsibilities between the federal government and the cantons. Fifth, and finally, we need to create a true “opportunity society” that effectively integrates all segments of society into the labor market, promotes equal treatment through high-quality institutions rather than through compulsion, and an educational system, particularly at the university level, that focuses more attention on excellence and less on federalist regional politics.