Federal Theology and Property Commons: At the Roots of the Swiss Model

A A
Blog
Author(s): Carlo Lottieri
Title: Federal Theology and Property Commons: At the Roots of the Swiss Model
Subtitle: “Why Switzerland?” — Switzerland through foreign eyes
Permalink
Print this article
Abstract
Abstract

Switzerland is a very successful reality. The small Alpine country has managed to build a strong economy in spite of the absence of abundant natural resources, in spite of a topography quite hostile to human settlement and transportation, in spite of a long history of poverty and emigration. Many scholars praise Switzerland as of model with respect to its formal and informal institutions, and classical liberals emphasize the strong relationship between institutional competition and property rights protection. In other words, there is a common understanding that this country has flourished because the strong self-governance of citizens in small Cantons and communes has made it difficult for the political class to increase taxation and regulation. The decentralized framework, built on the principle of subsidiarity, has promoted a better protection of property rights.

Nowadays Switzerland is a “federal State”. Ever since the Constitution of 1848, the city of Bern serves as the capital of a specific version of the modern State, where communes and cantons never lost the whole of their prerogatives. The traditional political order based on free pacts and agreements, which lasted five centuries, has been transformed into a rather balanced system, where central government and local entities share powers and competences. This change was important and, from a classical liberal point of view, it was not an improvement: After the birth of the federal State, the right of secession was suppressed, and over the decades, the autonomy of the local communities has shrunk. Nevertheless, the Cantons and communes still keep important competencies and they have some relevant responsibilities.

It is rather well known that the specificity of the modern Swiss political order is based on its particular features such as localism, neutrality, direct democracy, concord etc. But where do these features come from? Some of them are the result of a long evolution. They have their origin in some specific, often neglected aspects of Swiss history. Two aspects are especially relevant here: federal theology and the property commons. 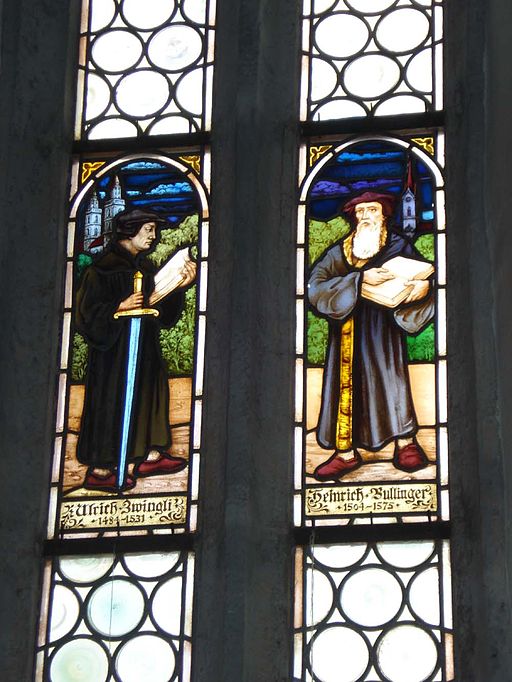 Some eminent scholars have shown that the logic of modern federalism was first developed in Zurich by Heinrich Bullinger, who substituted Ulrich Zwingli as leader of the new Protestant church. (Picture: Wikimedia Commons)

Some eminent scholars – Daniel J. Elazar, Charles S. McCoy, J. Wayne Baker and others – have shown in their numerous writings that the logic of modern federalism, which found an imperfect but very important expression in the American experience, was first developed in Zurich by Heinrich Bullinger, who substituted Ulrich Zwingli as leader of the new Protestant church. In his De testamento seu foedere Dei unico et aeterno, this reformer suggested an alternative to the political theology based on sovereignty. While Jean Bodin, the French theorist, translated some theological notions into political terms which would allow to build the modern State, Bullinger’s thinking always began with the Bible. His focus however was the idea of a free covenant between God and mankind, which would become a reference also for those who aim to construct a good civil society. After Bullinger this thesis was reformulated and further developed by Johannes Althusius, Johannes Cocceius and others. In this sense, the Swiss political culture is a reflection of that federal theology which tried, for some centuries, to suggest an alternative to political theology.

Bullinger looked not only at the biblical text, he also paid attention to the Swiss history and to the order of mutual aid pacts. This was remarkable: a federal network is structurally very different from a sovereign State. The original communities which formed ancient Switzerland also had very little to do with the modern notion of sovereignty (as it has been developed by the line of Jean Bodin and Thomas Hobbes) and the division between the private and public spheres.

In the 13th century, when the Swiss federal matrix emerged, the original Cantons were communities of mountain villages whose inhabitants shared the use of a number of woods, streams and pastures. The Landsgemeinde was the assembly of the community members, composed by all individuals entitled to use the undivided commons. They met to decide on the use of their common resources and on any matter touching the interests of the common owners as a whole. The assembly wasn’t open to all inhabitants, but only to the descendants of families present there from the very early days on (ab antiquo). By consequence, the property titles on the common resources were unevenly distributed in the village, and in this sense the principle of exclusivity played an important role.

These early developments demonstrate that Switzerland has always been characterized by the dominance of civil society over public institutions, the underlying principle of which is the federalism of owners. Even before federalism was interpreted as a political model for organizing the modern State, it served as a strategy of cooperation adopted by free communities of owners interested in sharing defense services, for example.

Switzerland in its current appearance is a state with political institutions that no longer differ completely from those in other countries. Nevertheless, Switzerland still offers a real advantage vis-à-vis the other European countries because it never totally severed its ties with its historical heritage and those institutions that used to be so important in the past: private property and voluntary contract.

Hurdles on the Way to Ecological Tax Reform

Hurdles on the Way to Ecological Tax Reform

Home » Federal Theology and Property Commons: At the Roots of the Swiss Model