Working Life Does not End at 65 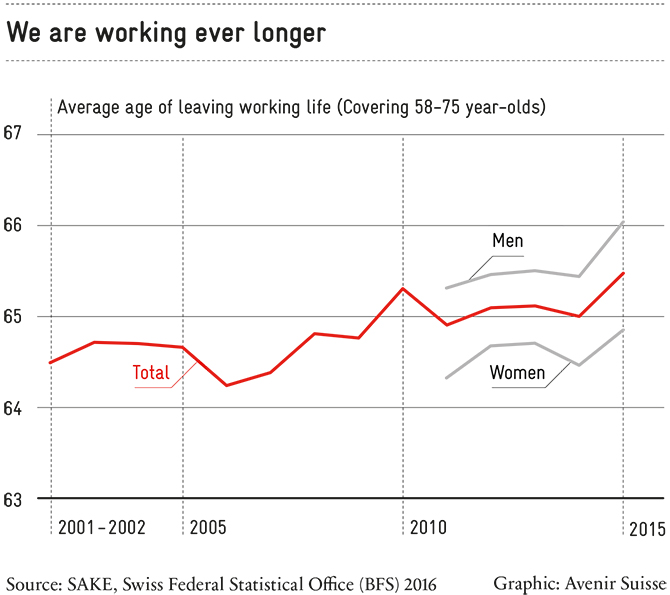 We are not just living longer, but working longer. That can be seen from the latest Swiss Labour Force Survey (SAKE) published this week. Between 2010 and 2015, the participation rate for 55-64 year olds rose from 70.5% to 75.8%. The rate for the over 65s also increased – from 9.3% to 11.8%. That means Switzerland has one of the highest participation rates for older workers among OECD countries.

Breaking through the 65 barrier

There are many reasons: generally better health, significantly improved workplace healthcare and the rising role of the service sector, where experience plays a bigger part than physical effort.

Moreover, older workers are unemployed less than in the past. That is shown both by statistics from regional job centres and data from the International Labour Organisation (ILO), that include unemployed at the end of their benefits. In 2015, the unemployment rate for 55-64 year olds was 3.9% – far below the average rate of 4.5% for 15-74 year olds.

Two conclusions can be drawn from the SAKE statistics:

Not everyone has it easy

But it would be a mistake to rest with these pleasing developments. Contrasting with the basically positive picture for older employees is a darker one for those older people seeking jobs.

Political discussion often spotlights the older unemployed to justify special job protection rules for older employees. That is the wrong approach: steps to help older job seekers should be examined instead.

Redundancy payments schemes that offer generous compensation for forced retirement, or that even forbid termination for those aged 55 and above – as some interest groups are currently advocating – would undoubtedly help older workers who already have jobs. But they would dry up the market and complicate hiring older people who are unemployed.

Imagine a branch manager in retailing, or a hairdresser, faced with two candidates of equal experience and similar pay expectations. One, however, is 44, and the other 54. Rules forbidding the termination of 55 year olds and above would oblige the employer to retain the older candidate for 11 years – irrespective of how the economy or the company performs, let alone whether the personal chemistry works. Obviously, the employer will choose the option allowing greater flexibility. So what is intended as a helpful measure turns out to be an invitation for age discrimination.

Moreover, all regulations raising the labour costs of older employees should be avoided, as these will encourage their displacement from the labour market. Some 26% of companies raise wages on the basis of age. But such practices are no longer appropriate, because they reduce the attractiveness of older staff for their employers.

There are good reasons and alternatives to reward job experience and company loyalty. In principle, regulations based on years of service, rather than age, are preferable. Anniversary gifts acknowledge the performance of long serving workers and reduce staff turnover. And they put candidates for recruitment with similar experience on an equal footing, irrespective of their ages, because all start from scratch.

Home » Working Life Does not End at 65