Public Companies in the Private Sector

“Sadly, the basic consensus on the role of the state has been somewhat lost”, said Rudolf Minsch, chief economist of business federation Economiesuisse, opening the final panel at Avenir Suisse’s annual workshop on competition policy at Puls 5 in Zürich.

Experts from business, academia and the civil service discussed the implications of the growing role of public companies in the private sector. Why has this happened? “Following the successful rescue of UBS, the state now feels fully justified in getting involved, rather than sticking strictly to past practice”, said Rudolf Minsch. Fearing an insidious “nationalisation” of Swiss business, he argued the priority now was a rethink on economic policy; after all, Switzerland hadn’t grown rich on subsidies and dirigisme, both of which carried high opportunity costs.

The unwelcome consequences of tax competition

For Johannes Reich, Assistant Professor of Constitutional and Commercial Law at Zurich University, tax competition and so called “new public management” are among the factors tempting the public sector to take a bigger role in business. 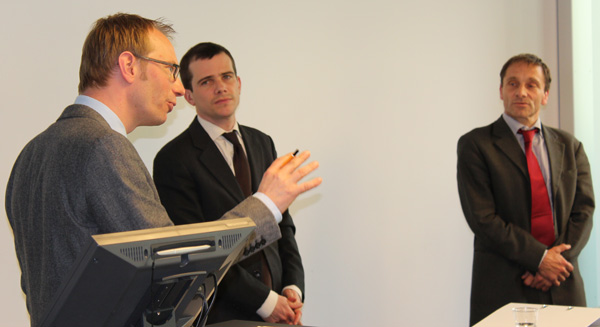 Using the Federal Supreme Court’s judgement of 2 May 2010 on Glarnersach – the public sector property and casualty insurer of the canton of Glarus – as a text book example, he showed how a company had exploited its monopoly as Glarus’s buildings insurer to spread into other cantons and activities.

That growth was given democratic legitimacy no less than three times: by the cantonal Landesgemeinde (an an assembly of eligible citizens of Glarus – Swiss direct democracy at its purest ed), the cantonal constitution, and even Switzerland’s Bundesversammlung (a special assembly of both houses of parliament ed), which found the cantonal constitution did not contravene federal law. This example spotlights the difficulties that follow when para-statal monopolists subsequently expand to become direct competitors of private companies.

“Not every form of aid is bad”, said Oliver Stehmann of the European Commission’s competition directorate in his presentation, which expounded on the economic variables helping to determine whether state aid was permissible or not. There are forms of aid, which are legal, and are accordingly excluded from normal cost-benefit analyses, such as certain regional assistance programmes, restructurings or certain types of public services. By contrast, subsidies which significantly restrict competition and are deemed deleterious would be banned.

The EU’s state aid rules limit and discipline the policies of individual member states. The latter, for example, cannot just replace former customs barriers with less blatant measures like cheap loans, export credit guarantees or tax breaks. Any such “beggar thy neighbour” race on subsidies would lead to higher costs for all and for the single internal market.

Matthias Oesch, Professor for Public, European and International public law at Zurich University showed in his speech how closely Switzerland already has to observe treaty-based international subsidy rules. This applies particularly to the rules of the World Trade Organisation and to specific bilateral agreements with the EU (Free Trade Agreement of 1972, Air Traffic Accord of 1999). The same would apply to the ongoing negotiations between Bern and Brussels on a wide ranging energy pact, in which the EU would certainly insist on Switzerland adhering to EU subsidy rules, he argued. That could be particularly complicated, he believed, given the fragmented ownership of Switzerland’s energy companies, where private, semi-private and public entities all participate. He added that similar subsidy restrictions could “meander” into other fields.

What limits for public companies?

The question of whether Switzerland needed an EU-style ban on state subsidies stirred debate: Matthias Oesch und Johannes Reich, the two law professors, argued Switzerland’s existing legal framework wasn’t adequate to prevent competition being distorted by subsidies. The free market alone was simply unable to compensate for missing rules, they said. Rudolf Minsch called for a return to simpler regulations for the institutional framework of the economy, and against additional laws, as these – as the EU example demonstrated – only came at the cost of major administrative and financial burdens. Samuel Rutz of Avenir Suisse closed the discussion, concluding that all the panellists were broadly agreed about the problems of public enterprises expanding into the private sector. Talks on the appropriate restrictions should, however, be taken up and pursued forthwith.

Author: Simone Hofer Frei
Short Biography
What do you think about this topic? Give your to the authors.