The Myth of the Family Silver

A Privatisation Agenda for Switzerland

Switzerland has a broad portfolio of state controlled companies. But the financial risks of these groups, which have to face eve more competitive and global markets, are borne by taxpayers. Avenir Suisse’s new study is intended to prompt an essential debate on what risks should be carried by taxpayers, and where privatisation would be desirable from both a political and operating point of view.

Switzerland has a broad portfolio of state controlled companies. But the financial risks of these groups, which have to face eve more competitive and global markets, are borne by taxpayers. Avenir Suisse’s new study is intended to prompt an essential debate on what risks should be carried by taxpayers, and where privatisation would be desirable from both a political and operating point of view.

As recently as a few years ago, energy groups counted as attractive public sector «family silver».  Their cantonal owners could count on regular dividends. But since then, more than one energy group has had to book billions of francs in paper losses. It can no longer be excluded that the financial losses in energy could be almost as big as those during the cantonal bank crisis of the 1990s, when various regional institutions had to be rescued by the state. This worrisome development makes it once again necessary to broach the subject of privatisation in Switzerland, and for every sector.

In our new «avenir debate» publication, Senior Fellow Samuel Rutz examines Switzerland’s state controlled enterprises. His analysis rebuts the myth that state owned companies are guarantors of quality and low prices. He shows, in fact, that existing political conflicts of interest can potentially be very damaging.  Careful analysis of developments in telecoms, finance and energy forms the basis for the study’s suggested privatisation agenda.

Privatisation should not be seen as an end in itself, but as an opportunity

Privatisations are above all a response to the challenges of a globalised and digital economy.  They can be pursued wherever there are financial risks for taxpayers, and where private sector groups can make a better fist of things than state ones. Examples include cantonal banking, telecommunications (state controlled Swisscom) or defence (Ruag). In competitive markets, privatisations mark the final liberation from political meddling that companies need to operate flexibly.

Matters are different when it comes to network infrastructure. In electricity or transport, a competitive market must first be created by deregulation and liberalisation. And wherever a state role is justified on the grounds that the free market would not provide the «socially desirable» quality or quality required, the market should at least begin to be opened, by, for example, offering specific contracts or tasks to the private sector.

Privatising state owned companies could lead to a bonanza in proceeds, which could be broadly earmarked for specific needs. But direct linkage is to be avoided, as it may trigger pointless turf wars over distribution. Avenir Suisse suggests any revenues from privatisation be distributed directly to citizens, either through tax cuts or «people’s shares». After all, taxpayers are the ones who until now have borne most of the risks. 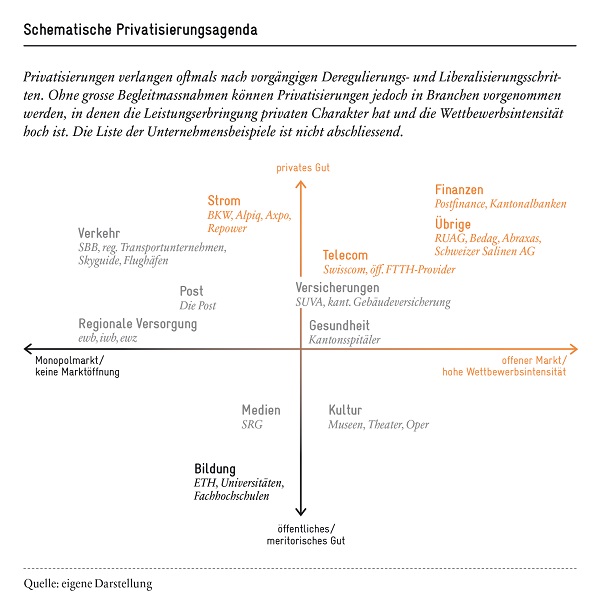 
Dr. Samuel Rutz is Senior Fellow and Head of Programs and Research and focuses mainly on privatization as well as competition policy and regulation. After his studies in economics at the University of Zurich he worked for a few years as research assistant at the Institute for Economic Research of ETH and at the Competition Commission. There, he was chief economist and member of the extended management.

Focus:
Competition policy
Regulation
Privatization
More from Samuel Rutz
What do you think about this topic? Give your to the authors.

Focus of the month Contrary to received opinion, taxes on capital in Switzerland bite hard

Home » Publications » The Myth of the Family Silver