Switzerland is a rich country. At some USD 50,000, it has the third highest per capita gross domestic product (GDP) in the world (based on 2012 prices). Its average wealth stands at USD 375,000 – which is more than that of any other country and is around 100 times higher than in India. In Switzerland, 9.5% of the population have assets totalling more than USD 1 million – a figure exceeded only by Singapore, Kuwait and Qatar. However, these monetary riches are spread more evenly among the population than in other nations due, in particular, to the Swiss occupational pension scheme (referred to as the “2nd Pillar”), which is based on the principle of saving rather than redistribution. Switzerland’s wealth is seldom flaunted – despite the fact that its culture of understatement, which was once so important, has been eroded in recent decades under the influence of the US and the UK. The villas in Dallas are still bigger than those in Switzerland, members of the upper classes in France and Spain still enjoy a more feudal lifestyle, the consumption of luxury goods by Russian oligarchs is still showier, and oil sheikhs in Arab states are still more conspicuous.

Crime writers, tabloid journalists and politicians the world over nevertheless still like to paint a mostly clichéd picture of Switzerland – portraying it as an extremely wealthy country that owes its prosperity almost exclusively to the somewhat sinister gnomes of Zurich. It is certainly the case that Swiss banks are assumed to hold private assets totalling around USD 2,250 billion – more than a quarter of the private assets under management worldwide. And Switzerland also boasts the largest number of globally active corporations per capita, with vast foreign assets (the figure is almost two-and-a-half times that of the Netherlands, which comes second in the rankings). However, in both cases, the majority of ownership rights are not held by the Swiss. Another fact that is overlooked is that in terms of prosperity, Switzerland overtook the Netherlands and the UK – both colonial powers that became rich long before it – between the end of the 19th century and the period around the First World War, a time when the evasion of taxes was not really an issue. It should also be noted that Switzerland achieved this primarily through its “real economy” – especially thanks to industries such as chemicals and pharmaceuticals, foodstuffs and engineering, as well as the early internationalization of these four sectors. 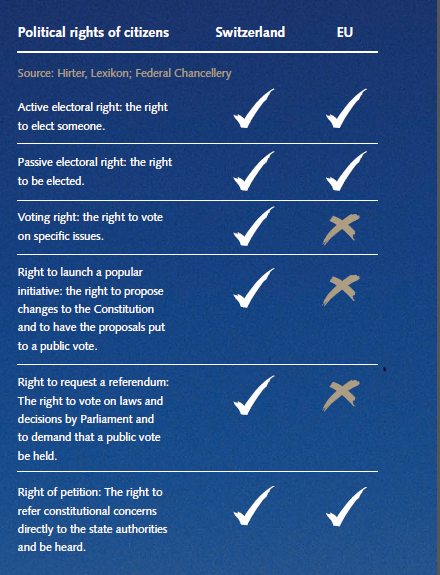 If we go beyond all the figures and caricatures, a glimpse beneath the surface shows that Switzerland’s true riches do not lie solely – or even predominantly – in private wealth. What makes Switzerland a strikingly rich country is much more those factors that the World Bank study “Where is the Wealth of Nations?” refers to as intangible capital (education, political leadership, quality of authorities, legal system), as opposed to its natural capital (land, commodities) and produced capital (machinery, buildings, infrastructure).

Taking all three forms of capital into account, the authors of the World Bank report calculated Switzerland’s per capita wealth to be around CHF 700,000 in 2006. Switzerland thus led the rankings by a clear margin – coming before Denmark, Sweden, the US and Germany. While natural resources account for one third to one half of the wealth of the world’s poorest countries, intangible capital is the dominant source of wealth in richer nations such as Switzerland and Germany, where it represents more than 80% of the total. This may make sense but the fact that natural riches are said to only account for roughly 1% of the wealth in these more affluent countries nevertheless raises some questions. After all, who would not also think of Switzerland as a small area containing a natural environment of rare beauty? An environment that is painstakingly nurtured and maintained and is, at times, perhaps even rendered a little too pristine – the result being a mix of Ballenberg and Disneyland?

However, there is no shortage of beautiful places in the world. Switzerland must therefore have riches that are more specific than just its natural beauty. One factor that should be mentioned here is the linguistic, cultural and religious diversity in such a small area, which makes living together a constant challenge – but also an enriching experience. It is also worth noting the interplay of various characteristics, scarcely any of which could be described as inherently Swiss but which, together, create something akin to “Swissness”: punctuality (not just the Swiss rail system), precision, reliability, cleanliness, orderliness, discretion, efficient use of resources, focus on quality, and a sense of tradition. In addition, there is Switzerland’s remarkably well developed infrastructure. Although it mostly eschews the (architecturally) spectacular, it works and can be maintained at a reasonable cost, unlike many prestigious projects in other countries that are falling into disrepair. The Swiss sense of thriftiness – which can sometimes border on parsimony – means that as a rule, the most significant expenses, i.e. the annually recurring operating costs, are also taken into account in capital spending. Hence, things are only built if they can be maintained. This lends a healthy sustainability to Switzerland’s riches.

Social cohesion is alive and well

Another of Switzerland’s riches is its social cohesion, which – for a long time – was stronger than in neighbouring countries. This is also likely to be a key reason why you can move around Switzerland fairly freely and safely – without an excessive police presence. The fact that members of the Swiss government can travel in the train or tram without a large security detail, or can go to their local shops at the weekend, strikes many foreign observers as highly unusual – and as a real asset. There are a lot of factors that have contributed to this social cohesion: compulsory national service; the “militia system” in which many political and public functions are performed by Swiss citizens on a part-time basis alongside their regular professions; an education system with at least two ways of advancing – i.e. the academic route or vocational training; the willingness to compromise, which is absolutely essential in light of the country’s diversity; and a much more even distribution of income (as opposed to the redistribution of wealth by the state) than in countries such as Sweden. Unfortunately, these “social riches” have been massively harmed by the salary practices imported from the US and UK – but they have not yet been completely destroyed.

However, the greatest of all of Switzerland’s riches is probably still the mutual understanding within the Confederation of the concept of the state and the resulting political system in all its forms. The decentralized structure of the state – with its federalism and the autonomy of its municipalities – not only leads to a closer relationship with citizens and greater identification with the state. It also facilitates the search for the best solutions thanks to the permanent competition between local and regional authorities; tax competition is just one aspect of this, albeit an important one. Direct democracy is the embodiment of a state that is built from the bottom up – a state in which the people are the only sovereign; a state which is there to serve its citizens and shows few of the trappings of an authoritarian regime. In such a state, the bank accounts of its citizens only become an issue when there is reason to suspect a serious offence.

The high level of participation of Swiss citizens in all political decisions leads to a greater sense of responsibility, and also compels people to stay informed. This involvement is also a form of riches – an intrinsic wealth to some extent. This fact is borne out by the results of the research into happiness conducted by Bruno S. Frey and Alois Stutzer (“Happiness and Economics”, 2002). These two researchers looked at people from cantons with fewer opportunities to participate in the political process who then moved to cantons with greater democracy and a closer relationship between citizens and the state. They also compared foreigners without participation rights with fully enfranchised Swiss. The results are unequivocal: The more possibilities individuals have to participate directly in political decisions, the happier they are.

A supposed weakness is a true strength

Paradoxically, one aspect of the political system that is regarded by many as a weakness is probably one of Switzerland’s greatest assets – namely the stability, constancy and slowness that are correctly associated with federalism and direct democracy. Although the inertia of the system occasionally means that reforms that are considered to be urgent are not addressed, it just as frequently prevents unnecessary or even detrimental developments from occurring. Furthermore, this inertia also gives the country a sedate form of stability. This is something that people seem to value greatly both in their private lives and in politics, and which they are scarcely likely to find anywhere else in the world in combination with legal certainty and democracy.

It is therefore no coincidence that with all its wealth, Switzerland fares very well in rankings of the best international locations – for example, it is listed as the small country with the best image in the Nation Brands Index. None of these outstanding results are based on Switzerland’s “monetary riches” but, instead, always focus very strongly on numerous soft factors such as stability, good governance, a liberal environment, openness, the value system and quality of life. However, what applies in private is also relevant in politics.

As Goethe had Faust say in his famous monologue: “What you have inherited from your fathers you must acquire to make your own”. Switzerland is currently paying too little heed to its intangible riches; to the array of soft factors that make it unique. It runs the risk of losing its distinctiveness and becoming ordinary, of neglecting its social cohesion, its political system, and its constancy, stability and reliability, and of sacrificing itself to a changing environment driven by passing trends in the name of conformity. In so doing, it would also jeopardize its material riches and prosperity, since the two go hand in hand. Switzerland could not really be called rich if it were only to be successful in attracting large inflows of money. By the same token, it would scarcely have become rich without its special institutional, cultural and social facets. They are what make Switzerland rich, in both senses of the word.