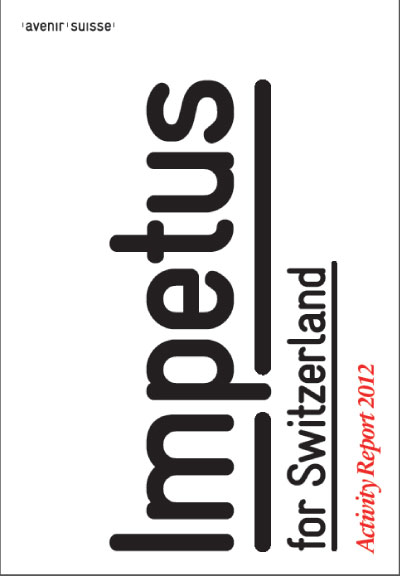 Avenir Suisse was particularly productive in 2012. Each of the project leaders published a comprehensive study – in addition to the basic workload which consists of shorter publications, newspaper articles, lectures, participation in panel discussions and interviews in both printed and electronic media. The range of Avenir Suisse online services was also expanded further. In addition to its regular publication, “avenir aktuell”, the Think Tank also launched the topic-specific “avenir spezial”, with the first issue being dedicated to energy policy. Thanks to all these activities, there has been a sharp increase in both media attention and the number of visitors to the website.

Although 2012 was a calmer year for Switzerland than 2011 in economic terms, there were nevertheless emerging problems, and it is important to recognise these issues in good time. In the autumn, an Avenir Suisse study about the Swiss middle class provoked a wide-ranging debate about the position of this social and economic backbone of Switzerland. It is clear that large sections of the middle class are plagued with anxiety that they are on a downward trend, since their incomes have not increased at the same rate as those of the upper and lower classes. In addition, the state’s redistribution policy is hitting the middle class particularly hard. Given the explosive nature of this topic, Avenir Suisse has plans to focus on distribution-related issues in future.

The fact that Avenir Suisse has increasingly developed into an institution over recent years and is treated with respect, even if people do not necessarily share its market economy perspective and liberal views, has made the Think Tank‘s admonishing and inspirational role easier. Avenir Suisse is held in high regard – and not just in Switzerland. It is a cooperation partner of similar institutes in Germany and Austria, and a new Think Tank launched in Vienna was modelled on Avenir Suisse. Moreover, Avenir Suisse staff have been invited to lectures, not only in neighbouring countries, but also in England, Hungary and the Czech Republic. This growing recognition is a further incentive for Avenir Suisse to contribute to the further development of Switzerland with in-depth studies, new ideas and clear communication.