Avenir Suisse’s Freedom Index: It‘s Getting Tougher at the Top 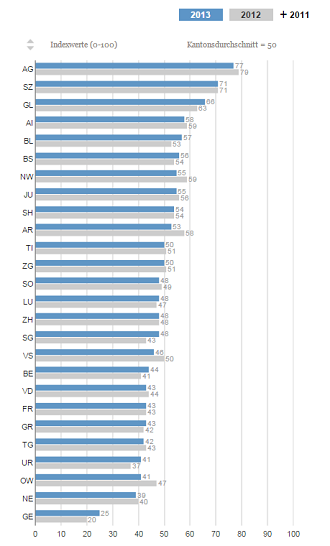 Looking at just civil or economic freedoms individually produces a slightly different result, with Aargau emerging as second in both categories. Schwyz comes first for economic freedoms, having already overtaken Aargau in 2011, while Jura has led the field for civil freedoms since 2007. Much change, but no newcomers, in the top 10 Some notable changes emerged among the cantons ranked fifth to tenth – even if no  newcomers entered the top 10 (see graphic). The biggest winner is Basel Landschaft, which has jumped from 10th to fifth place thanks to its healthy cantonal finances and relatively short building approval periods. Basel Stadt has climbed by three notches thanks to improved cantonal finances and liberal shop opening hours, now putting it in sixth place. But the biggest mover in the top 10 is Appenzell Ausserrhoden, which has fallen by four notches to 10th on account of a rising public spending quota, more fixed speeding traps and longer building approval times. Swiss cantons’ civil and economic freedoms in international perspective Switzerland has for years been among the leaders in the most important international freedom indices, showing how firmly freedom is rooted in the country. But one common weakness of all the international rankings is their failure adequately to reflect cantonal differences in freedoms stemming from Switzerland’s federal system.

Avenir Suisse’s Freedom Index, first published in 2011, tries to tackle this shortfall. It tracks 21 economic and civil criteria, allowing direct and transparent comparisons between cantons as regards the acceptance and form of fundamental freedoms. Both economic realities – the tax rate on an average family, the public spending ratio, fees on hotels and restaurants, or cantonal monopolies – and civil criteria are included. Do parents have a free choice of school? How many fixed radar traps are there?  What’s the average time to get a bulding permit? Because appropriate data are not always immediately available, the index is calculated with a two year lag – meaning the 2015 outcome is based on 2013 data.

There have been two adjustments to the calculations this year. First, a new method of compilation has been used for data in the length of building approval sub-index. Secondly, there have been slight adjustments in assessing the free school choice criterion to prevent distortions. In future, only the offer of cantonal subsidies to private schools will be valued, rather than the absolute amount. Previous indices from 2007 have been adjusted to reflect the change, leading to some small shifts in certain cantons’ past rankings. Valais and Obwalden – two clear losers in the midfield As in 2012, the midfield is led by Ticino and Zug. With a score of 50 points, both corresponded exactly to the Swiss average.

But while Ticino lies dead centre for both civil and economic freedoms, Zug’s positioning results from a much wider dispersion. The canton ranks above average for economic freedoms, but below par for civil ones. Most striking among the other mid ranked cantons are the changes for Valais and Obwalden. Valais has slipped four places to 17th, due to a high public spending quota and deteriorating cantonal finances. That’s just where Obwalden stood in 2012. However, this time the latter has slithered down the rankings to 24th place. Lucerne and St Gallen, by contrast, have both climbed the table thanks to better finances.

Author: Samuel Rutz
Senior Fellow and Head of Program Planning and Research
Short Biography
Author: Tobias Schlegel
Short Biography
What do you think about this topic? Give your to the authors.