Decades of Pragmatic Cooperation – Despite Differences in Size

Facts about the Switzerland-EU relationship

Most Swiss are pragmatic when it comes to Europe, allowing until now successful and close cooperation, with economic advantages for both sides, despite the big difference in size between Switzerland and the European Union. But, in the light of the controversy about the recently rejected Institutional Agreement (InstA) between Bern and Brussels a brief explanation of the history of the bilateral path and its importance is necessary.

The discussion on the InstA has once again focused attention on Switzerland’s relations with the EU. While controversial among politicians, most Swiss seem to take a pragmatic position. A recent poll showed 64 percent approval for the proposal. Since 1992, voters have already come out 13 times on European issues, in most cases backing continued and deeper bilateral relations.
Thanks to the large number of bilateral agreements to date, Switzerland has secured access to the EU single market and participates on almost equal terms – despite asymmetrical sizes. The discrepancy most obvious in terms of market size: EU GDP is almost 23 times larger than Switzerland’s, while 52 times more people live in the EU’s single market than in Switzerland. However, Switzerland remains attractive because its per capita purchasing power is more than double that of the EU. Nevertheless, Swiss companies have more opportunities in the EU than vice versa, if only because of the far bigger size of the EU single market.

In absolute terms, Switzerland has a clear trade deficit vis-à-vis the EU member states in both goods and services. In 2020, Switzerland imported products and services worth around CHF 168 billion, corresponding to almost 60 percent of total imports Exports to EU members amounted to around CHF 152 billion. The EU also remains by far the most important partner relative to Switzerland’s total foreign trade: 48 percent of all goods exports and 40 percent of all services exports went to the EU in 2020.

For the EU), Switzerland is the fourth most important economic partner after the USA, the UK and China. However, Switzerland’s economic importance for the EU is significantly lower than vice versa: Thus, just under 7 percent of all goods exports and 12 percent of all services exports of the EU go to Switzerland. So, a deterioration in mutual market access would hit Switzerland – in relation to the total volume of foreign trade – far harder than the EU. 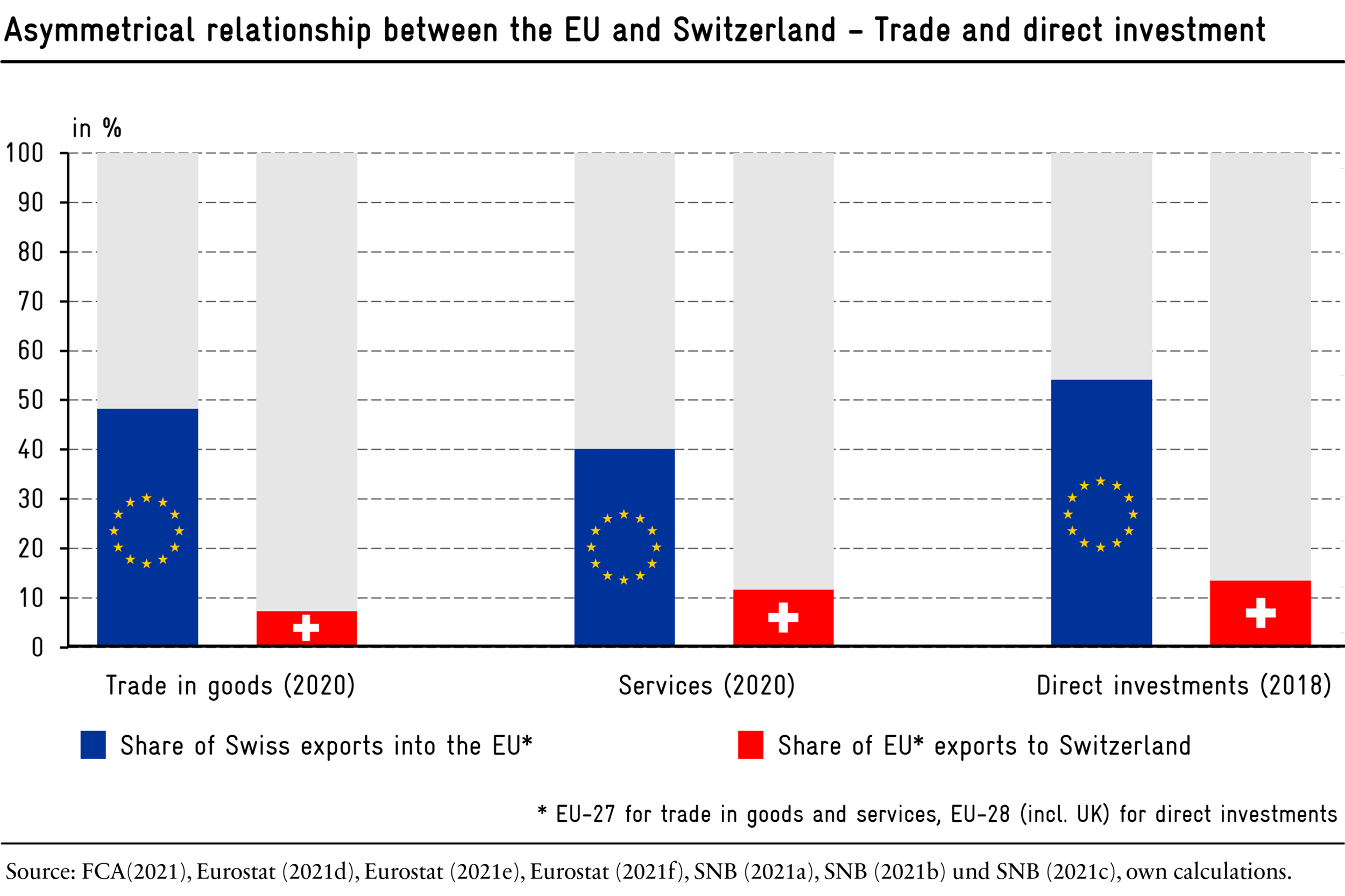 Close ties also exist through the abundant direct investment flows between the two economic areas. Around 54 percent of all Swiss direct investment abroad goes to the EU (2018), almost doubling between 2010 and 2018 (from CHF 418 billion to CHF 791 billion). This is likely to include the creation of many EU subsidiaries by Swiss companies to be closer to their main customers. By contrast, only 14 percent of EU direct investments flow into Switzerland (2018 figures, including the United Kingdom), though the total was an impressive CHF 1.2 trillion. So, in absolute terms, significantly more is invested by the EU in Switzerland than vice versa.

From an economic perspective, Swiss companies have more business opportunities in the EU single market in terms of trade in goods and services than vice versa. If market access deteriorated, Swiss companies would have more to lose. However, Switzerland benefits from the fact that domestic purchasing power is high, offsetting some of the asymmetry.

Author: Peter Grünenfelder
Director
Short Biography
Author: Patrick Dümmler
Senior Fellow, Head of Research "Open Switzerland"
Short Biography
What do you think about this topic? Give your to the authors.

Home » Decades of Pragmatic Cooperation – Despite Differences in Size