At the end of October the EU just managed to get its act together. True, the EU states and parliament agreed to cut CO2 emissions from new cars in Europe by 100 percent – to zero – by 2035. But unlike in June, when the European Parliament was still envisaging an explicit ban on combustion engines, the EU Commission has now been given the task of developing a set of rules for the use of climate-neutral e-fuels in new passenger cars from 2035.

Not only this, but the decision that’s now been taken is also to be reviewed as early as 2026 in light of the progress made by then, and adjusted if necessary. There would have to be progress, for example, in the expansion of distribution networks and charging infrastructure. But the main progress, quite simply, would have to be in the supply level of renewable electricity. Without a sufficiently green electricity mix, electric transportation would be reduced to absurdity.

Those who still oppose the ban on internal combustion vehicles are often accused – as in a meme that recently went viral – of a certain intellectual obtuseness. But the two most common arguments put forward in this matter lose their punch when examined more closely. That’s why the compromise that’s now been reached in favor of technology openness is to be welcomed.

“Most European car manufacturers have already decided to phase out combustion technology anyway, by 2035 or even earlier. A ban, therefore, hurts no one, but creates planning security.”

The decision of these car manufacturers was not based on the supposed superiority of electric cars. In part they’re trying to boost their image by showing obedience in anticipation of a threatened ban. But above all, they’re responding to the fact that current regulation already improperly favors the electric motor: The calculation used to determine the overall consumption of cars made by a specific manufacturer assumes zero grams CO2/km for electric vehicles across the board, even though the production of the power EVs use is by no means climate-neutral. The average electric car uses about 20 kWh/100 km including charging losses. With an average emission factor of 231 g/kWh in the EU, this corresponds to CO2 emissions of 46 g/km.

However, the mix is assessed strictly according to an end-of-pipe logic: Only the pollutants that leave the car at the tailpipe are taken into account, not what the car produces in emissions during its entire life cycle. The target value of 95 g CO2/km in force for new car fleets since 2021 corresponds to gasoline consumption of 4.06 liters/100 km. This is already almost impossible to achieve with an internal combustion engine (except in a subcompact car). A reduction of the limit to 80 g (≙ 3.42 liters of gasoline) is planned for 2025 and to 40 g (≙ 1.71 liters of gasoline) in 2030.

Car manufacturers are therefore effectively being forced to electrify significant parts of their fleets. Since it is not economically viable for most manufacturers to take both tracks at once, they have decided to ban the internal combustion engine altogether.

The fleet emission targets are therefore anything but technology-neutral and are thus a significant driver of the electrification of passenger vehicles. This can be seen as a bad thing or a good thing. However, the claim that automakers will switch to electric cars anyway because of the general superiority of this technology is not tenable.

“The production of e-fuels is extremely electricity-intensive. No matter what advances are to be made in these processes, an electric vehicle will always be more energy efficient than an e-fuel car.”

This statement is in fact correct: the efficiency of even a modern internal combustion engine is a mere 40 percent. And to synthesize an e-fuel, water must first be split into oxygen and hydrogen by means of electrolysis, and the latter must be combined with carbon in a further process. Both processes involve conversion losses, so the efficiency of e-fuels is currently 15 percent at best.

But the question of efficiency could become secondary if you consider the following points: Electricity can’t be transmitted over long distances (e.g., from one continent to another), so it must be generated more or less where it’s consumed. Not only that, but given that there’s no significant intermediate storage, electricity must be consumed at the same time as it’s produced. A complete switch to electric vehicles in Europe would therefore require an enormous expansion of photovoltaic (PV) and wind power plants within what is a densely populated continent, and create major challenges in terms of the security of the electricity supply. Another problem is that in Europe, where it’s not all that sunny, PV systems run at suboptimal efficiency.

E-fuels, on the other hand, can be transported and stored very easily (just like fossil hydrocarbons), even with the infrastructure that already exists today. This would allow PV plants to be placed in locations with more intense and frequent solar radiation and low population densities (the Sahara, Middle East, and Australia), with the e-fuels also being produced right there and then shipped to places including Europe.

Furthermore, if PV capacity within Europe is expanded, electricity production surpluses are to be expected in summer. This electricity would have to be temporarily stored anyway (via infrastructure that would be costly to create). The obvious solution would seem to be to use these surpluses to produce e-fuels. 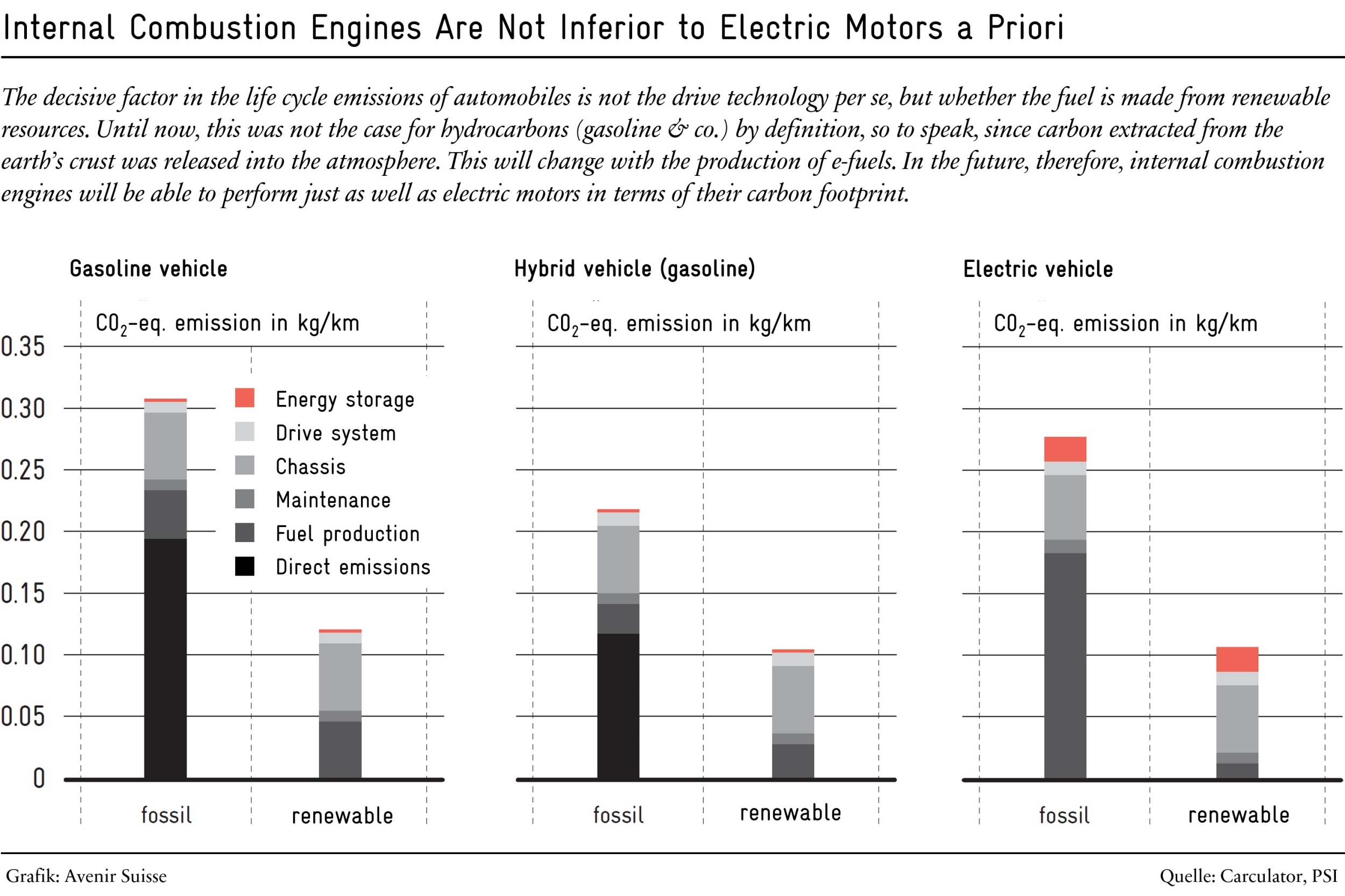 So the question of the efficiency of internal combustion-powered vehicles running on e-fuels recedes into the background when you consider that the required for them could be met with a combination of very cheap PV production on otherwise unproductive desert land and surplus electricity generated in Europe in the summer.

Despite all this, it would be wrong to conclude that cars powered by e-fuels are superior to electric vehicles. They’re probably not. But it would have been just as wrong to explicitly ban internal combustion technology, not least because such a ban would have slowed research in the field of e-fuel generation, including research on carbon capture (at fossil power plants) and carbon recovery from the atmosphere.

This would have done a disservice to the climate: In the future, e-fuels would be required for aircraft, ships, and possibly trucks – in other words, everywhere where electric motors are obviously impractical. Even with an absolute ban on the sale of new cars with internal combustion engines from 2035, a significant number of passenger cars with internal combustion engines would still be in operation in Europe (not to mention the rest of the world) by 2050. Filling these with carbon-neutral fuels as soon as possible would be an important step on the road to net zero. A ban on internal combustion vehicles would have reduced the incentives for innovation, despite the remaining use cases, because of the significantly smaller market size, and would thus possibly have had a counterproductive effect.

The idea of producing electricity for e-fuels on a large scale with PV systems in the Sahara, the Middle East or Australia makes many people instinctively throw up their hands: This would only create new geopolitical dependencies – the very dependencies we’re seeking to free ourselves from by switching to renewable energy! It’s true, it does create dependencies. In return, however, it’s worth remembering that electric mobility is also currently creating considerable geopolitical dependencies: The battery of a Tesla Model 3, for example, weighs 478 kg. Large quantities of lithium, nickel, cobalt, graphite, and manganese are needed to manufacture it. The countries with the largest lithium reserves are Chile, Australia, Argentina, and China. In addition to political dependencies, the environmental concerns associated with mining are hardly less than those for oil, natural gas, and the like. So, to make a complete switch to electromobility politically and environmentally acceptable in terms of resource requirements, we must first hope that new battery technologies such as sodium-ion, aluminum-sulfur, and solid-state will make the breakthrough.

All this shows that it would not have been wise to explicitly and expressly ban the internal combustion engine by 2035 – even if battery-powered cars should ultimately prevail as the more attractive option.