Europe and North America are currently fixated with income and wealth distribution. Anti-capitalist critics denounce unfair “inequalities” – with some success. Recently, Swiss voters showed their customary and remarkable common sense in not being lulled by siren calls for redistribution (in a referendum on setting a fixed ratio between top and bottom salaries. ed.) But the matter is not over. Demands for greater redistribution, however big an obstacle to progress, will stay on the agenda. Many people remain haunted by the misapprehension that greater economic equality is synonymous with greater justice.

Equal is not equitable

Income distribution at any given time is a static concept. It shows one part of the population is better off than another. That is self evident in a free and open society and, therefore, of little intellectual value. Equalising income and wealth only fits, as Ralf Dahrendorf has emphasised, with statist and totalitarian societies – or with extremely poor ones, whose populations barely scrape out an existence.

Free market economies, by contrast, provide wealth and progress, even for the poorest. However, they don’t serve the human craving for fair play through ultimate redistribution, but rather via their permeability.  What matters is scope for self advancement, and sanction for failure. From the point of view of social justice, the crunch question of a liberal society is, where do you stand on income mobility?

Unfortunately, the answer is even more difficult than regarding distribution. But our socio-economic graphic (see chart) offers some tips. The chart is based on the study “Wie durchlässig ist die Gesellschaft? (How porous is society)” by the statistical department of the canton of Zurich, reviewed in the “Neue Zürcher Zeitung” on October 17, 2013, but still not widely picked up. 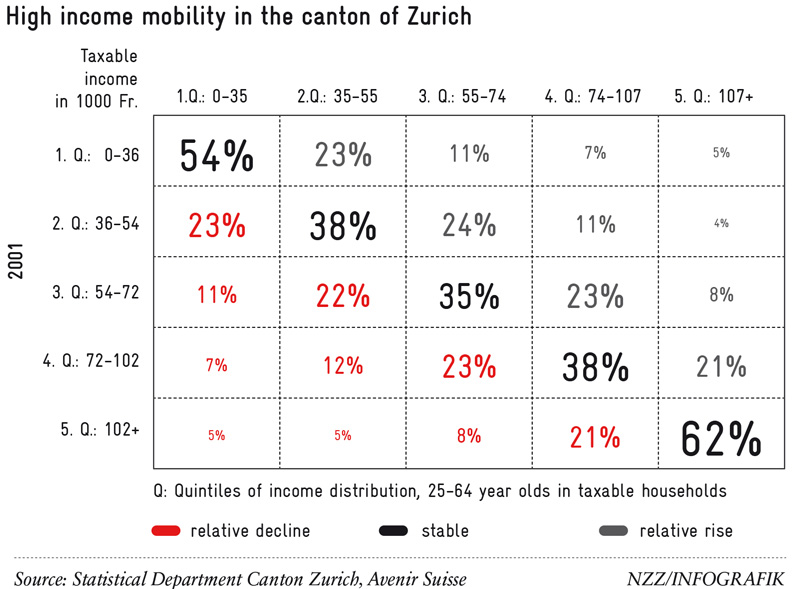 It is based on data from 491 000 taxable households in 2001 and in 2010. The data accordingly excludes households which only started paying tax after the beginning of the period – either because those involved were still too young in 2001 or only entered (or exited) the canton thereafter, or of course, because they fell out of the statistics owing to death. As the data cover  households, divorces or increases in family size are not taken into account. While that creates some methodological difficulties, these are not serious enough to distort the overall message.

How should the chart be read? The fundamental point is that the graphic highlights relative mobility: a household can only climb the scale if another falls, and vice versa. That also means, in a fast growing economy, that someone climbing the scale can, in certain circumstances, be overtaken without actually suffering a drop in income. The figures in black show the percentages of households that in 2010 were in the same quintile as in 2001; in green the climbers; and those in red the decliners.

Looking, instead, at the chart from the top down, almost 40 per cent of 2001’s richest quintile had slipped nine years later. Some 5 per cent had fallen to the very bottom group. And less than half of the very top 1 per cent (not detailed on the chart) managed to hold their position.

When the rich fall

This is the most important message of the chart and the underlying data: the poor (without state aid) do not necessarily stay poor, and the rich don’t always stay rich. In the canton of Zurich – and in Switzerland as a whole – incomes are mobile. On average, only 45 per cent of households remain in their original income bracket. The remaining 55 per cent either go up or down. Unsurprisingly, slicing incomes more finely into deciles (10 percentage point ranges) reveals even greater mobility, with almost three quarters changing categories. Naturally, extending the time span also shows greater volatility.

A second observation is that the biggest changes are in the middle. That may not be particularly surprising, as people there can move either up or down. By contrast, at the very top or the very bottom, there is only one direction. Incidentally, the data show income mobility in the canton of Zurich is roughly the same as in mature economies like Germany and Austria. By contrast, young dynamic countries demonstrate much greater volatility.

Much of the mobility shown is explicable by the normal human life cycle. Younger people tend to earn less – often because they’re still investing in education. Earnings then rise to around the age of 50, after which there is little further increase. So the chart also spotlights the dangers of concentrating exclusively on distribution statistics. If you just take a snapshot of all incomes at a given moment, you’re obviously comparing datapoints as different as the earnings of an apprentice who’s paying her own way, and of a doctor at the end of his career. What’s more important is the “mobility” of income. Hard work and, of course, a bit of luck, can push incomes higher. Then again, the pendulum can swing the other way for those who don’t perform.