A A
Blog
Author(s): Andreas Müller

Switzerland is in the throes of a bizarre debate. People aren’t discussing the future, but bickering over a historical portrayal whose core should be Swiss exceptionalism. What’s missing, it seems, is any sense of Switzerland in today’s networked “global village.”

Any credible historical narrative needs a consistent thread between past, present and future: anyone lacking a vision of the future will inevitably stumble in interpreting their past. When we bring to mind our past, we also address the future. So depictions of history based on isolation or exceptionalism are biased. Such “selective” history implies keeping silent about both the future and the past – a form of intellectual emptiness.

History is about change

Education, training and further education today pose key demands on the individual. “Lifelong learning” sums up our breakneck world. To exaggerate: whoever wants to survive and succeed must learn: it’s no coincidence the bookshelves are full of tomes extolling “Organisational Learning.” The same can be said for all the chatter about “learning cities” or “learning regions.”

Although the backgrounds are similar, the same rules, curiously, don’t apply when talking about Switzerland as a nation. Switzerland will only succeed if it remains able to learn – and to learn from its mistakes. Or, exaggerating again: the Swiss Confederation is (and was) successful precisely because it was always a “learning nation.” But nowadays, Switzerland’s history is often explained completely differently. This approach prefers to give the impression that Switzerland should simply continue its path of the past. Nothing is said about history always describing change. And what’s lacking, from a liberal point of view, is a systematic, connected history of a country whose success has always been based on its ability to learn. 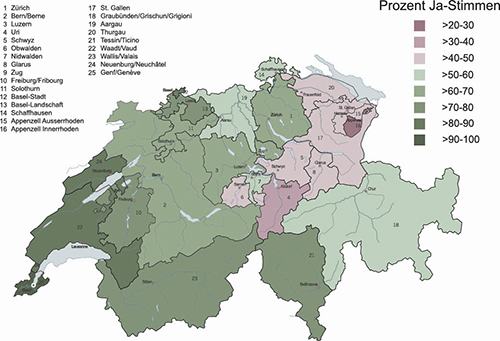 Result of the federal referendum of 7 February 1971 on the introduction of voting rights for women in Switzerland. (@ Wikimedia Commons)

After all, Switzerland’s direct democracy makes the country almost tailor made for collective learning. Its people can always rediscover themselves – and do so – as they themselves can initiate change. What has Switzerland learned from other countries, or from the foreigners who live in its borders? When do the government, parliament, the people, learn? When does the entire political system learn? Switzerland has gained a well developed system of “governmental learning” thanks to its referendums, which provide instant popular feedback that political leaders must respect. There are many examples of rapid “popular learning” – just think of the introduction of daylight saving time: the idea was initially scorned at referendum, only to be accepted a year later.

We’ve also learnt to recognise and value learning over the longer term. Take the introduction of voting rights for women, or membership of the United Nations, where change only came over time. Switzerland learnt from its marked federalism – from the experience of individual cantons, but also from other countries. The two chamber legislature, for example, introduced in 1848, was copied from the US.

In short, Switzerland is a country defined significantly by its ability to learn – a sort of “learning community”. What we lack, and what in fact would influence our future, is adequate explanation of the origins and development of this “learning nation.” Such a definition of history could form the basis for the future vision of a learning Switzerland undergoing change – a portrayal of history that would empower people. Anyone willing and able to learn has no cause to fear the future. Such a person doesn’t stop moving forwards just because of perceptions of the past. Nor do they cower before today’s uncertainties. That’s because they know: who, if not we Swiss, has the ability to master their future?

Author: Andreas Müller
Short Biography
What do you think about this topic? Give your to the authors.