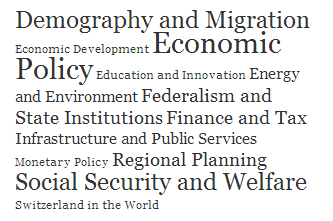 Switzerland is a country of immigrants. At almost 22,8% of the population, the proportion of immigrants here is one of the highest in Europe – exceeding even “classical” melting pots like the US (12,8%) or Australia (19,9%).

In recognition of the fact, Avenir Suisse has launched an English language website alongside its established German, French and Italian products. The new site is aimed at the many foreign professionals and their families living in Switzerland. While most speak fluent English, they may be less familiar with our national languages. Appearing in English also helps us exchange views with other think tanks around the world.

Back in May 2011, we launched the – then only bilingual – versions of our website to further our aim of “disseminating our message”.  Since then, our motto has remained the same. But now we’re extending our mission to the expatriate community, offering our publications and – we hope – bringing Switzerland as a whole that little bit closer. In an initial step at the beginning of this year, we for the first time published our 2012 Activity Report in English too.

We’re pleased Haig Simonian, the former long standing Switzerland Correspondent of the Financial Times, has agreed to be involved in our blogs. Twice a month at least, he will convey one of our texts in his mother tongue – not just translating, but adapting, explaining and embellishing to make this or that Helvetic peculiarity more comprehensible to an English speaking audience. On top will come regular contributions from our staff that have appeared in English language publications, or which have been translated by others.

Of course, the volume of our material in English will be relatively modest to start. A few blogs, an overview of our publications of recent years, general information about our think tank and, of course, our “Impetus for Switzerland” report. Whoever wants to learn more about – and to use – Avenir Suisse‘s full offering should consult our work in German and French as well.

If you, or your English speaking friends, have any suggestions about the new website (https://www.avenir-suisse.ch/en/) we’d welcome your feedback.