Swiss Top Income Share at the Level of the 1960s

When it comes to pay, income distribution and working conditions, the Swiss Trade Union Federation (SGB) is alarmist in the extreme. Its recent report on wage pressures and inequitable distribution (Lohndruck und ungerechte Verteilung) tries to convey the impression earnings inequality has taken off in Switzerland and that an outrageous redistribution is under way from lower to higher earners. To “prove” their point, the authors use all the statistical tricks in the book.

The report looks at the development of top incomes in Switzerland – after all, in the current climate, it’s easy to score cheap points by focusing on a high earning minority. So the emphasis is on how the share of the top 1 per cent, or even the top 0.1%, of earners has performed compared with overall pay. The SGB’s graphs show the share of the top 0.1% soared by 60% from 1979 to 2008, or from 2.5% to 4% of the total over those years.

Why this period? The year 1979 was probably selected as starting point because the proportion of high incomes was conveniently at a low. In the 1960s, by contrast, the share of the top 1% was at today’s level and actually above the average for 2000 -2009.

What’s striking from the figures is the decline in the first half of the 1970s – probably attributable to two factors. First was the steep recession after the oil price shock: high incomes have been shown to be much more vulnerable to business cycles than middle or lower ones. Second, there were clear tax increases at the start of the 1970s. The higher rates were possibly sidestepped by keeping money in the business, rather than disbursing it as pay. Other top earners left the country, while others still may just have worked a bit less. 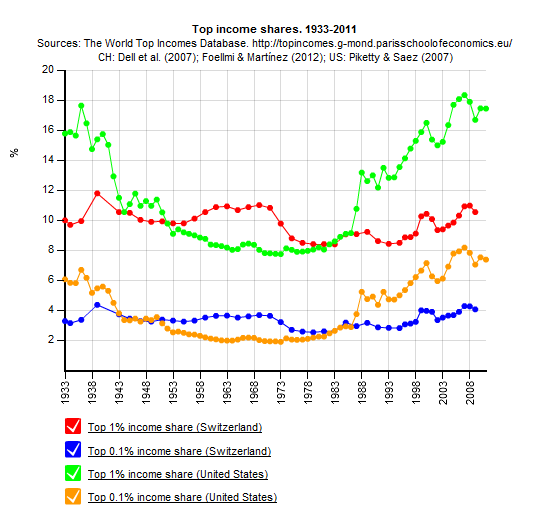 Data for Switzerland in the World Top Incomes Database stretch back to 1933. Looked at over this longer span of nearly eight decades, the development of top incomes over the past 15 years looks much less dramatic. The long term trend could easily be described as a “big move sideways.”  The share of the top 1% seems hovers roughly around the 10% mark.

Just compare that to the US. There, the top 1 per cent’s share rocketed from 8 per cent of the total in 1979 to about 18 per cent in the second half of the last decade. But in fact, even the latter levels were nothing new, as a similar distribution was evident between 1900 and 1940.

There’s no doubt high earners, (and those with the highest incomes) have profited most from Switzerland’s economic development. That was already clear in Avenir Suisse’s own study on the strained small and medium sized company sector (Der strapazierte Mittelstand).

But is there any need for concern? The crucial question is whether top earners are being rewarded for their special contribution to business and society. If we’re talking about entrepreneurs, who’re putting their assets at risk and then harvesting the fruits of their efforts, the answer is a resounding “Yes”. After all, everyone gains from their commitment, in the form of jobs, tax revenues and new products and ideas. And don’t forget: no one talks about the failures: they just drop out of sight, both from the statistics and the real economy.

True, matters are more complicated when it comes to top executives at quoted companies. Here, the relationship between pay and performance is not always obvious. There’s no doubt that some managers have lost the sense of proportion generally expected in Switzerland. But this is an issue for politics, public opinion and personal ethics. What’s relevant in terms of economics is the question of whether high salaries and bonuses are invariably necessary to drive managers to perform well.

In a correctly functioning market for managers, that should be at least partially true. But no market is perfect, meaning the top incomes of some executives are at least partly “unearned.” The problem, though, is that it is virtually impossible to judge from outside where that applies and where not. Crude external intervention into this market would probably do more harm than good. And whether lower salaries for executives would really help “the little man” – as the unions suggest – is open to serious doubt. After all, when it comes to executive pay, the issue at stake is how to divide the spoils appropriately between management and shareholders.

Home » Swiss Top Income Share at the Level of the 1960s