A A
Blog
Author(s): Mariusz Lukasiewicz

Since 1980, foreign trade per capita has tripled to just under SFr 100 000, while the country ranks eighth worldwide in terms of total direct foreign investments. In 2015, close to 70% of gross domestic product was earned abroad – proof that Switzerland’s openness is the foundation stone of its prosperity. With recent politically motivated changes to transatlantic trade agreements, Switzerland needs to revaluate its foreign trade strategy and be prepared to make some compromises on protected sectors of the economy.

Switzerland’s post-war commitment to neutrality left an important mark on the country’s foreign trade policy. When debating entry into any trade agreement, the Swiss government must always balance the potential loss of economic sovereignty with the benefits of foreign commerce. Switzerland’s largest trading partner, with a 62% share, is the EU. This relationship should be broadened and the country’s tradition of proposing bilateral treaties with Brussels strengthened. More importantly, a new EU “Bilaterals Plus” set of measures should clarify current legal uncertainties and ensure Switzerland’s access to further economic sectors, such as energy and financial services.

Switzerland already profits from an extensive network of bilateral and multilateral free trade agreements. Existing deals with South Africa, Turkey and Canada should be renewed and expanded. A number of other large export markets, such as Indonesia, India, Brazil and Australia should be targeted for negotiations on new free trade agreements. Switzerland’s success in negotiating a free trade agreement with China in 2013 illustrated the country’s ability to strike deals with trade superpowers. With this proven success, Switzerland needs to look further to the fast growing Asia-Pacific area for new trade opportunities. More significantly, and closer to home, the implications of Brexit for the trade agreements with the UK, a subject on which the British Leave and Remain campaigners have sharply disagreed, will need to be reviewed and evaluated as soon as soon as Article 50 is triggered. 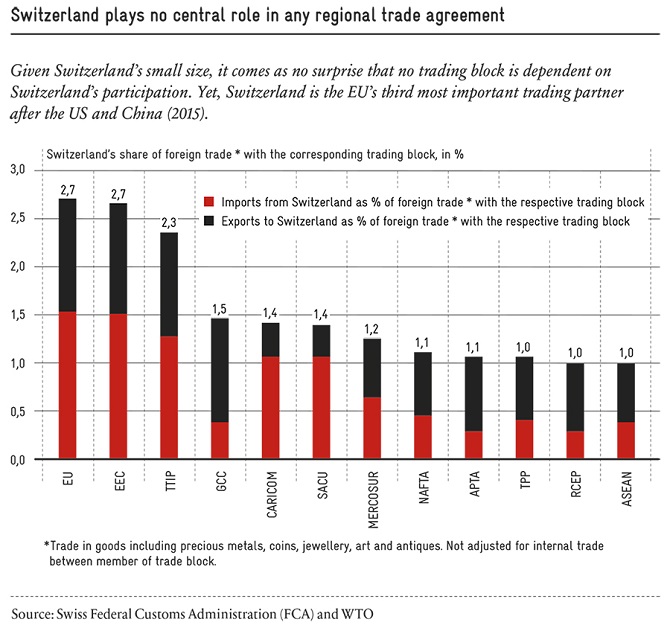 On 20 January 2017 Donald J Trump will be sworn in as the 45th  President of the United States of America. Trump’s surprising win in the US presidential elections is a geopolitical game changer that will affect all aspects of global governance for years to come. For Switzerland, the recent US election result surpassed the initial shock and significance of last June’s Brexit vote. One of the key features in Trump’s election campaign was his fundamental criticism of liberal trade and the USA’s migration policy. He seems firmly against the principles of free trade, and thus against the expansion of global value chains. The plan is to gradually withdraw the US from ongoing and future negotiations on free-trade deals and act tougher on China, where unlike Switzerland, the US has no free-trade deal.

If implemented, Trump’s plans could also have significant impact on the Swiss economy. It is likely that the US will retreat from its active role in multilateral trade negotiations, which spells bad news for Switzerland’s open economy. The Transatlantic Trade and Investment Partnership (TTIP), the planned free-trade agreement between the EU and the USA, will most probably be delayed. Previously the primary issue for Switzerland was to ensure access to TTIP, as the country was not part of the original agreement. With the likely delaying of TTIP, the priorities for Switzerland have changed. Asia will be a growing priority for Swiss exports. With the US, Switzerland should take the initiative and look at negotiating a bilateral free trade agreement. Previous talks with the US government on this subject took place about ten years ago but were aborted because of the Swiss unwillingness to go further (largely due to domestic agricultural opposition).

The new external context will force Switzerland to intensify domestic trade policy reforms. The most heavily protected sectors of the Swiss economy, namely agriculture and services, remain underexposed to foreign competition and are in many cases entirely excluded from any potential free trade negations. The global integration of Switzerland’s services should also be promoted by relaxing current restrictions on temporary staff transfers from EU or EFTA countries to Switzerland, allowing for longer stays without additional bureaucracy on work permits and trading licenses. Agricultural reforms continue to be stalled by political opposition at the federal level, supported by a very active and efficient lobby. Switzerland tops OECD countries for agricultural subsidies. Close to 60% of the gross revenues from Swiss agriculture producers are provided through public funds despite the fact that domestic agriculture accounts for less than 2% of the country’s GDP. Furthermore, many other export sectors that account for much more in terms of added value and jobs in the country, need access to open markets, hence the urgency for new free-trade agreements. Thus, the opportunity cost of the agriculture’s opposition towards free trade agreements is extremely high. A significant political compromise amongst the country’s ruling parties is needed to change this protective attitude.

Avenir Suisse’s response to critics of trade liberalization is to call for a rational and factual discussion to ensure the country’s long-term prosperity. Switzerland’s response strategy in the event of bilateral breakdowns would be very limited. In terms of foreign trade, economic isolationism would be disastrous for Swiss business and cause a dramatic decline of the country’s prosperity. At the other end of the debate, the economic benefits of a more open economy, helped along by further bilateral treaties with the EU, are politically challenged by supporters of stricter immigration controls. Free trade agreements are largely supported as long as they include goods and capital, but political opposition is rising against maintaining the free movement of labour with the EU.

In order to secure and potentially increase Switzerland’s long-term prosperity, Avenir Suisse’s new discussion paper: “Trade rather than protectionism: A three pillar strategy for Switzerland’s foreign trade,” calls for a ratification of free trade agreements to boost Switzerland’s economic relations with Europe and the world. The main recommendations put forward focus on continuing and deepening the country’s strategy of striking bilateral treaties with the European Union, boosting free trade with non-EU countries (particularly in Asia) and further liberalizing the domestic market, especially in services and agriculture.

This is the first contribution to the Avenir Suisse’s new English-language monthly newsletter.

Author: Mariusz Lukasiewicz
Short Biography
What do you think about this topic? Give your to the authors.