The Iceberg of National Debt

In fact what we actually can fairly recognise in the European debt crisis to some extent is bad enough. For 2012 the explicit national debts in Greece amount to about 170% of the gross domestic product (GDP), in Italy to about 120%; in Ireland and Belgium they are around 100%. These are basically quite immense amounts. And even in the “pillars” of the EU, in Great Britain, France and Germany, they range between 90% and 80%. Since public spending ratios range somewhere between 40% and 50% at large, this means that even the one-eyed among the blind, in case they wanted to pay off the mountain of debts, would have to grant absolutely no state subsidies, would pay no wages to officials, would have to close the public schools and they would have to intercept public transport etc for about two years. In other words: The states would have to cut their households for 20 years about 10% to attain the same effect. All states have been living so much beyond their means.

Below the water surface

However, such mountains of debts are like icebergs. We only see the tip, i.e. a small part, consider ourselves safe and underestimate the dangers. With the national debts of the founders of the eurozone (the euro-12) only one quarter of the mountain of debts is clearly visible in the form of explicit public debts made in the past. Three quarters lie under the water surface. This still invisible, so-called implicit national debt consists of all those tremendous obligations for the future which the states have committed themselves to, and for which they make, however, no provisions. Pensions and pension commitments or care and health services are to be considered which the states promise to their citizens and which will often come up only in future decades. Moreover, the present budget balance adjusted for interest expenses, the primary balance, plays a role. 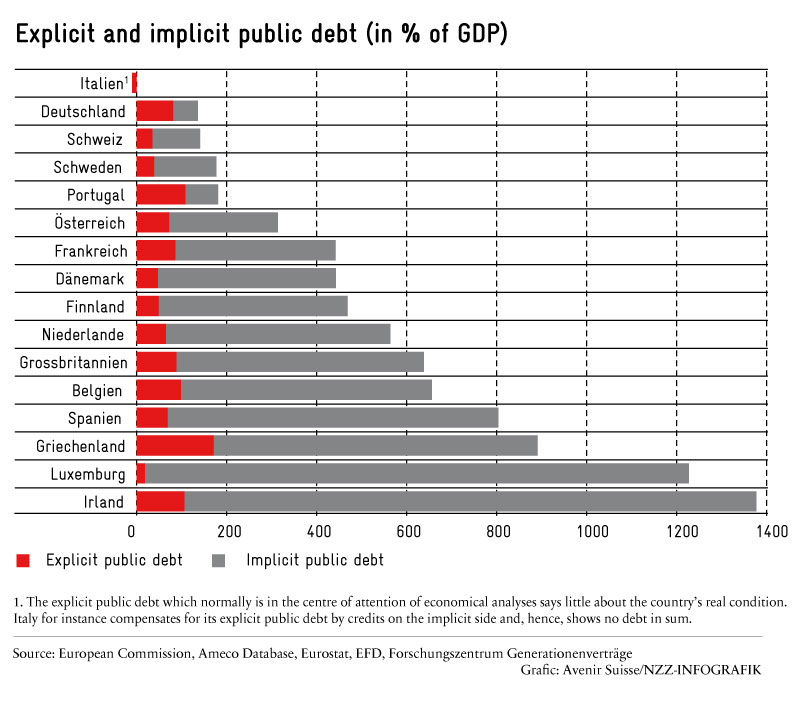 If we add the implicit national debts calculated by Prof. Bernd Raffelhüschen (Freiburg in Breisgau) to the explicit, officially shown debts, we are filled with bare horror. For the euro –12 states this whole burden of debts, hence the sustainability gap, amounts to more than three times the GDP of these states – or 75% of the world’s GDP of 2010. In Ireland this gap even amounts to more than the 13-fold of the annual economic performance, in Luxembourg to more than the 11-fold. But even “prigs” like Germany or Switzerland suddenly face clearly higher debts, often several times as much as the explicit public debt.

Some time ago the German “Foundation Market Economy” worked out on the basis of slightly different, but absolutely comparable figures and under the blunt title “Honorable States? The Sustainability of European Public Finances in Times of Crisis” (Moog & Raffelhüschen, 2011) what is needed to bridge these sustainability gaps. They calculated how much the state expenses would have to be reduced permanently (not only in one year) or the public revenue would have to be durably raised in order to protect the sustainability of public finances in the long term. For the euro-12 states they found out: 5.1% of the GDP (not of the budget) on an average, for the front runner Greece 17.6%, for Luxembourg 12.0%, for France 4.3%, for Austria 4.8%, for Germany 4.0% and for Italy 2.4%. The differences in ranking between sustainability gap and consolidation needs primarily have to do with population dynamics. If population shrinks as is expected for Germany, public debts will be distributed on lesser shoulders.

Secondly in the graph’s countries the implicit public debt is always substantially bigger than the explicit one, except for Italy and Germany. One is often a multiple of the other. Thirdly under inclusion of these “invisible” debts one probably has to slightly revise the view of the debt situation of particular countries.

While the “usual suspects” range in the lower third of the graph, others surprise – like the already mentioned Luxembourg. France ranges in the worse half, and also Austria does not impress, whereas just much maligned Italy ranks first due to the low expected increase of expenses for pensions and welfare as well as because of the relatively high primary surplus. However, even Italy has to be careful, because an increase of the interest and a weak growth could quickly lead to the fact that the primary balance is not sufficient to keep the mountain of debts stable at least – not to mention all the other states.

Home » The Iceberg of National Debt