All manner of more effective alternatives

The referendum “For an Unconditional Basic Income” never had a dog’s chance of passing. The attempt to shake up the welfare state – at a time, moreover, of little patience for experiments – was bound to fail from the start, as will be shown at the ballot box.

But the initiative could have been useful for provoking debate about the future of Swiss social policy. Is today’s welfare state, with its heap of partly patronising,  increasingly contradictory and administratively complex programmes, the right answer to challenges like working poor, youth unemployment and inadequate integration? Wouldn’t a radical simplification serve everyone best?

Sadly, the debate hasn’t gone that far. Aside from some stunts, the arguments from the scheme’s initiators can be described as naive at best. How can one get to grips with studies that tout the “de-stressing” qualities of a guaranteed basic income while overlooking completely the fact that financing schemes would cause some households severe difficulties?

Lower earners would have to pay up

The initiators’ carelessness with their own utopia is evident in their choice of financing. The planned monthly guaranteed income of SFr2,500 would come from the  “absorption” – in other words taxation – of low wages. Those earning less than SFr2,500 would have to hand over their month’s earnings, and receive the guaranteed SFr2,500 in return. Those earning more would not, however, contribute directly on a net basis to the financing, because they would receive exactly as much back from the scheme as they put into it.  (The SFr25bn funding shortfall would be filled by higher value added tax). That means anyone earning less than SFr2,500 a month would face a marginal top tax rate of 100 per cent – making, for example, working part time virtually unthinkable. But, strangely, supporters of the scheme are adamant such punitive levies would have no impact on the supply of labour.  (Maybe they even question the force of gravity …)

The guaranteed income financing models aired for decades in the literature remain pie in the sky.  They explicitly recognise the potential disincentives, but, unlike the example cited, try to minimise these through a less heavy tax burden on lower earners, who would otherwise be most affected. 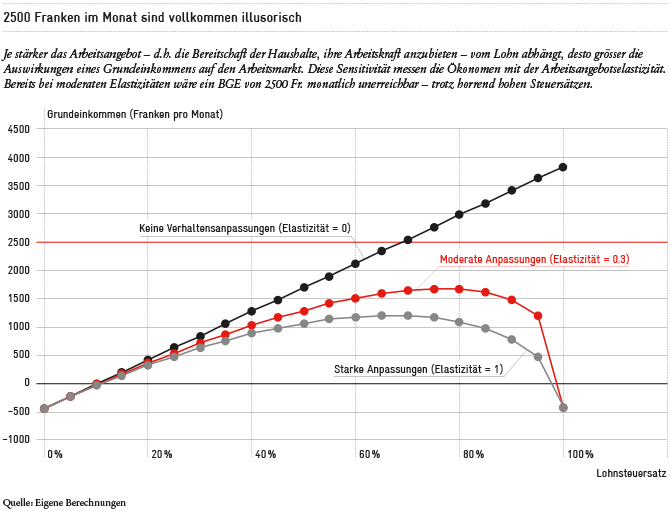 The greater the dependence of the supply of labour on pay, the greater the effects of a guaranteed income on the labour market. Economists measure such sensitivity via the elasticity of supply of labour. Even assuming moderate elasticity, an unconditional monthly basic income of SFr2,500 would be unattainable, in spite of horrendously high tax rates.

But even such variations are come at a price. In spite of abolishing welfare receipts, statutory unemployment pay and state pensions, it would still cost about SFr150bn in extra tax revenues to assure the guaranteed SFr2,500 a month. That would mean a hefty income tax rate of 42 per cent.  A further SFr100bn would be needed to guarantee other expenditure, like schools, roads, the armed forces and healthcare. Even assuming only a modest elasticity of labour to the rate of tax, there would be painful consequences, with people working shorter hours, leaving the workforce, or even emigrating.

Even under such financing arrangements, simple modelling shows the target of SFr2,500 is unattainable.  Our analysis suggests a guaranteed income of less than SFr1,000 a month could be financed – but only by really squeezing taxation, itself somewhat unrealistic. Financing via value added tax, which would at least broaden the tax base, would help only marginally.

There are plenty of more effective alternatives to an unconditional income. They include the Earned Income Tax Credit, which subsidises wages through tax credits. These more realistic options would also avoid the most problematic (and expensive) feature of guaranteed incomes – their unconditionality. Such alternatives warrant further discussion in Switzerland – even if it means giving up on stunts like dressing up as robots.