The unusual openness of Switzerland

After the 9 February referendum, one observation has become more common than ever, at home and abroad, from the Swiss themselves and from foreigners: Switzerland is cutting itself off. What’s true is that a wafer thin majority of voters apparently wants stricter curbs on immigration. But that apart, the comment betrays all the distortion and sillyness of every sweeping statement.

10-times more than in France

That’s particularly clear when comparing Switzerland’s openness to immigration with the reality in most European countries – particularly its immediate neighbours. Our “graphic of the month” tries to illustrate this. The blue areas and related figures show how many extra immigrants (net of emigration) the countries concerned would have to admit each year, (both in absolute terms and in proportion to their populations) if their net immigration matched Switzerland’s. Since the introduction of the free movement of people in 2007, the latter has seen net immigration of about 80,000 a year.

For Germany, immigration on the Swiss scale would mean about 700,000 net new arrivals year in, year out; for France, the figure would be 600,000. Even Italy, which thanks to outlying Lampedusa has gained a grim renown, would still have to accept an extra 200,000 annually.

The data can also be expressed less hypothetically: Germany, 10 times bigger than Switzerland in both population and land area, actually received only about 10,000 more net immigrants a year between 2007 and 2012 than its small neighbour. In the case of France, net immigration in the same period was a mere 0.07% – in other words, less than one tenth the corresponding Swiss level (and even in absolute numbers less than two thirds of the Swiss total). In Austria, even absolute figures for net immigration were only one third of those for Switzerland. And remember: these data are not for one, exceptional, year, but for a significantly longer span. 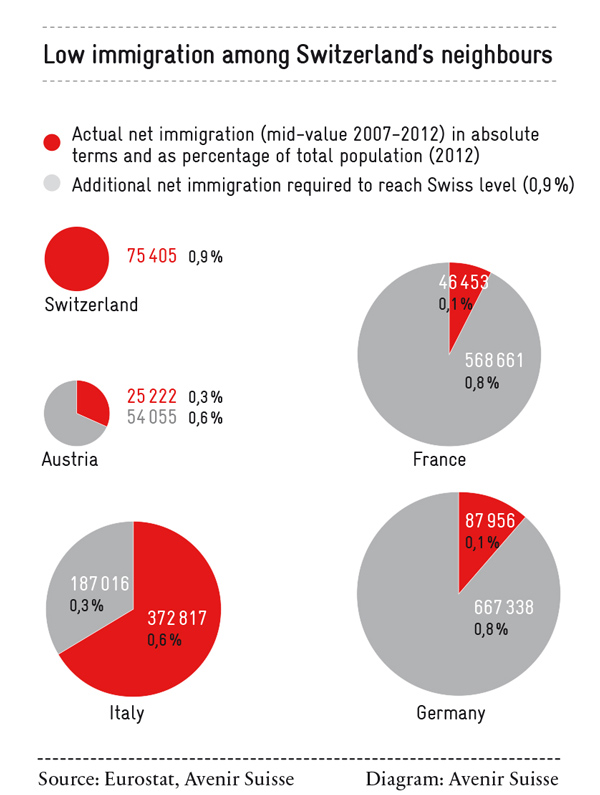 Another striking comparison is worth noting, particularly against all the talk in Switzerland around referendum time of “overcrowding“ – a catch all term for both justified, and less warranted, concerns: while France and Austria both have markedly lower net immigration, the former is about 16 times bigger than Switzerland in terms of land area. Even Austria is about twice the size.

No grounds for indignation

Even using broader European comparisons, Switzerland’s openness remains striking. For instance, average net immigration in Europe (for those countries that registered more arrivals than departures) ran at about 0.4% – less than half the comparative number for Switzerland. Between 2007 and 2012, only Cyprus and Norway had similarly high net immigration, while Luxembourg, at 1.5%, was clearly more elevated. The result of decades of strong immigration shows in the fact that about 30% of Swiss residents were actually born abroad, while more than one third have at least one, if not both, parents who are foreigners. That’s markedly different from Norway, where immigration only started after the oil boom and where, even today, only about 14% of residents are from abroad.

Of course, lots of objections can be raised about such statistical exercises – not least the fact that small countries almost inevitably, because of their size, are more open than bigger ones – and not just vis a vis immigration. Hence the particularly high levels for Luxembourg, likewise Liechtenstein. But the differences are sometimes so extreme they can’t be explained away by just minor niggles. The fact is that Switzerland really is one of the most open countries in Europe – and will remain so, even if immigration falls significantly. So the indignation heard after 9 February from swaths of media and politicians both at home and abroad is really unfounded.

A self inflicted wound?

Another question is how sensible – morality and inevitable tensions with the EU aside – is the effort to cut immigration? Every simple answer to this would – inevitably – be too simple. But two factors should be borne in mind. First, a significant driver of immigration has been – and will continue to be – a country’s relative economic strength compared with its neighbours. That’s no different in Norway than Switzerland. Unattractive locations don’t even need to think about curbing arrivals. By contrast, success breeds allure and draws foreign labour. An important additional factor in Switzerland’s case is that the country is surrounded by a pool of about 150 million people of working age, each of whose mother tongue (French, German or Italian, ed) is one of polyglot Switzerland’s own national languages.

Secondly, there’s the fact that Switzerland’s economic success – its very own “Wirtschaftswunder“ to borrow the phrase commonly used for Germany in the 1960s – has, since the start of industrialisation, been closely associated with immigrants. That doesn’t just mean entrepreneurs and company founders, like Heinrich Nestlé from Frankfurt or Walter Boveri from Bamberg, but inventors, salesmen and simple manual labourers too. And such immigration has never really stopped, in spite of occasional ebbs and flows. It’s this that should be under discussion in Switzerland: to what extent might tightening immigration too far turn into a self inflicted wound? Any moral indignation, particularly from Switzerland’s neighbours, is hardly justified – as the biblical reference in the title of this column suggests.