Economics and Education Flock Together

A A
Blog
Author(s): Matthias Ammann

In the media, the term “economization of education” often refers to a supposedly negative trend in the educational landscape. For many, education and economic thinking are opposites.

In fact, education and economics have always been closely related. Take, for example, the proportion of university graduates integrated into the labor market, or their country’s overall capacity for innovation, where Switzerland achieves remarkable results.

One important reason is that educational institutions and companies work together closely. Quite justifiably, vocational education and training are described as cornerstones of Switzerland’s prosperity.

But while cooperation between companies and educational institutions is accepted by most, it is defamed by others. One stumbling block has been the private financing of university chairs, with critics claiming research results could be influenced by donors.

This argument goes to the very core of science, essentially its credibility. That is why the Association of European Academies of Sciences (ALLEA) has developed four principles for the use of private funding:

Such guidelines will certainly foster the independence of research and teaching. The principle of transparency explains why patrons are often prominently mentioned in the chair. At the same time, the use of donor names is an expression of the university’s appreciation, since the additional funding will make it possible to expand research beyond previous limits. 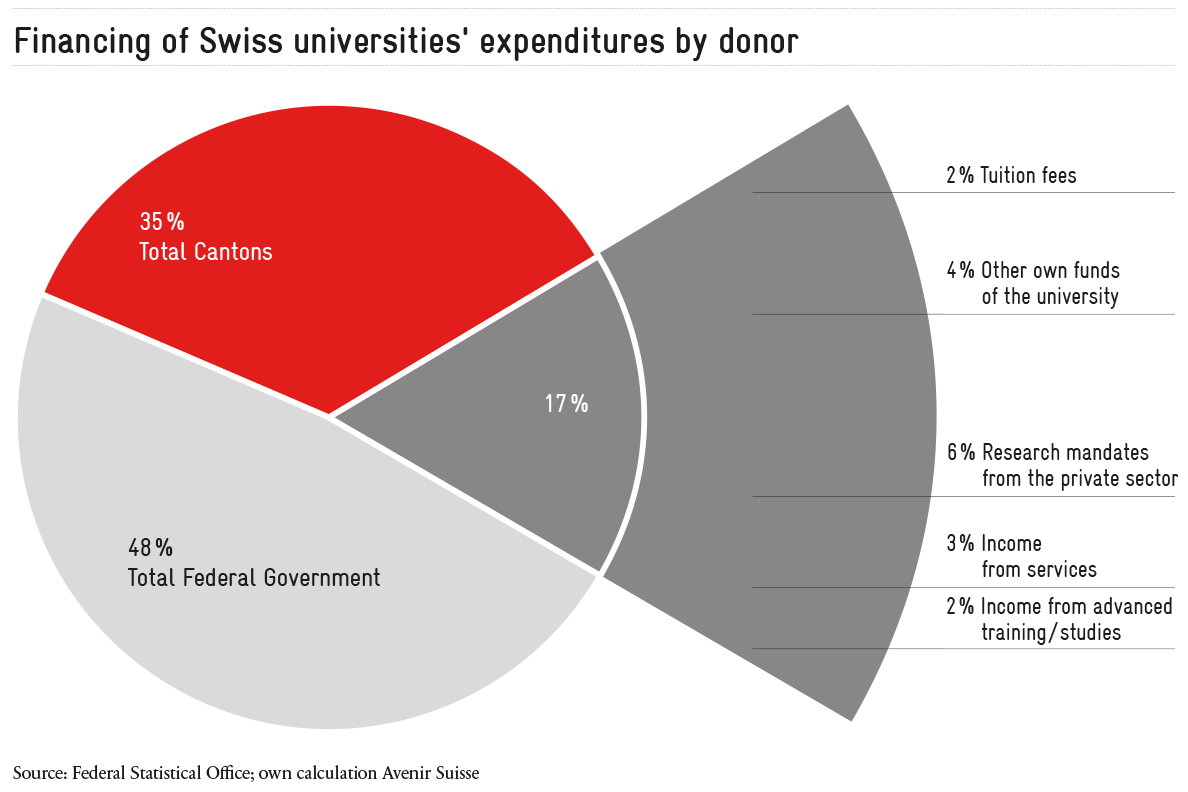 Generally speaking, supplementary private funding increases the scope of action of a university and in the use of public funds. Autonomy grows with the variety of funding sources. Government alone does not make research more independent, if you look at the situation in Switzerland, where the national research programs (NRP) are shaped by the political preferences of the Federal Council.

In today’s Switzerland, private funding contributes only a fraction of total university expenditure, with the public sector bearing the main burden. So far, there is no evidence for dependence of academia on private sources. The bigger danger for insufficient university funding stems rather from the allocation battle for public funds. With society ageing and expenditure for social security and health set to rise, this conflict is likely to intensify.

Private donors are important in broadening the funding of universities. They can help to enforce the strategic position of a university and facilitate long-term planning. Nonetheless, a balance must be struck between endowed and dedicated chairs.

Ultimately, private support of universities is a mirror of the business community’s confidence in local seats of learning. Excellent research depends primarily on the intrinsic motivation, creativity and abilities of researchers. The main concern should be to provide them with the resources to pursue their aims.

Author: Matthias Ammann
Short Biography
What do you think about this topic? Give your to the authors.

Home » Economics and Education Flock Together