“We Need All Forms of Energy”

A well organised business with abundant margins and contended investors. For many decades, energy policy was almost boring. That energy issues today have become as tense and complex as a detective novel was evident to guests too, listening attentively to the experts’ remarks for almost one and a half hours at the 2015 “Annual Dinner.”

In his introductory comments, Gerhard Schwarz stressed the cyclical nature of energy policy and the difficulties involved. As recently as six years ago, when Avenir Suisse presented its first study on energy supply, crude oil was trading at $140 a barrel – a stark contrast to $50 today. Likewise for electricity – currently being traded on international markets at the lowest prices – there can no longer be talk of imminent supply shortages, as was the case until relatively recently. All these uncertainties have been reinforced by the fact that Switzerland is anything but an “energy island” and is in fact highly dependent on developments abroad.

Federal Councillor Doris Leuthard comfirmed the unexpectedly fast pace of international change. She identified the USA’s shift over a few years from energy importer to exporter as one of the most significant geopolitical developments. Particularly complex too – because of distorting the market – were the countless subsidies through which vast amounts of money were flowing into fossil fuels, rather than renewables. To cap it all, the Ukraine conflict had increased Europe’s awareness of the need to diversify its energy suppliers. To cope with all these challenges, federal energy policy was built on three pillars:

Johannes Teyssen in his speech took the corporate perspective and showed how the business model of a large group like E.ON would change in the years ahead. The main trigger would be technical progress. By 2020, according to estimates, 28 billion devices would be connected. That would not just have a big impact on energy demand, but bring all manner of customer wishes in its wake. “Everyone can bring about their own change in energy policy.” 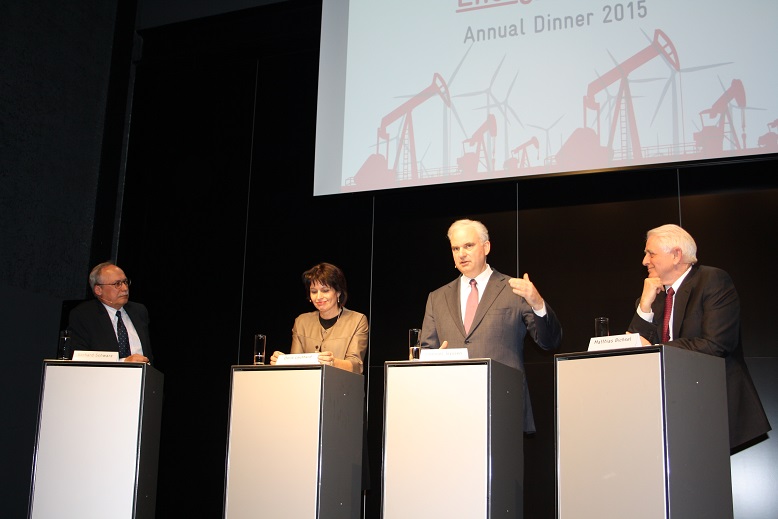 But Teyssen was correspondingly pessimistic about the integrated supply structures that have dominated the sector until now. It will be difficult for companies that for years focused on infrastructure and a unified product to meet new customer needs. That is why E.ON decided to split into two: one company will think radically from the consumer view and focus on those business areas in which agility is paramount – among them electricity from ecological sources, electricity and gas networks, as well as distribution. The other company will encompass conventional power stations, exploration and global energy trading.

Certain as Matthias Bichsel is that the oil price will rise again one day, he warned the audience against jumping to the conclusion that our energy sources might change radically. Optimistic estimates reckon the world economy could meet only 25 per cent of its energy needs from renewables by 2040. So that still leaves 75 per cent for conventional sources. “We will need all forms of energy.” An important accompaniment for renewables – and one with room for growth – is natural gas, which causes less atmospheric pollution than crude oil.

In the panel discussion that followed, debate focused on the appropriate role for the state in the changing energy landscape. Federal Councillor Leuthard seemed surprised by business representatives’ demand that the state should bring all parties to the table. “Designing the market can’t be the state’s job.” By contrast, the experts were more or less agreed on the question that subsidies, though damaging in the long run, could be necessary in the short term – especially if security of supply were at stake.

Home » “We Need All Forms of Energy”