After the military invasion of Ukraine on February 24, Russia was quickly subjected to coordinated and massive economic sanctions by Western democracies. Led by the United States, comprehensive sanctions were imposed on Putin’s regime within four days by seven other economies, including the EU and Switzerland.

The first round of sanctions initially appeared innocuous, affecting only individual Russian banks and technology exports to Russia. In the second round, however, the sanctions were massively tightened. For example, the Russian financial sector was barred access to the rapid financial messaging network SWIFT, the foreign assets of Russian oligarchs were confiscated, and most Russian central bank reserves overseas were frozen. Never before had a G20 nation faced such drastic economic sanctions, and never before had there been so many of them in such a short time.

Forcing Those Affected to Change Their Behavior

The more the war progresses, the more the question arises as to whether the sanctions imposed on Russia are working – and if not, why they should not be lifted.

For conclusions to be drawn about the effectiveness of sanctions, their purpose first has to be clear. The ultimate goal is to force those affected to change their behavior to avoid the costs of sanctions.

In 1967, Johan Galtung dismissed this idea as a “naive theory of sanctions.” His assessment is supported by historical examples: Behavioral change, after all, has rarely been achieved through sanctions ‒ especially when armed conflict was to be prevented or stopped.

In the 20th century, for example, only three out of 19 attempts to avert war with the help of sanctions were successful. Of these successes, two can be attributed to the League of Nations, which stifled incipient border wars between Yugoslavia and Albania in 1921 and between Greece and Bulgaria in 1925. The third successful use of sanctions was US financial pressure on the pound sterling that ended the British military expedition to Egypt in the 1956 Suez War.

The history of economic sanctions also shows that they have the greatest impact when coordinated with allies and implemented multilaterally. The more major economies that support the sanctions, the greater the cost to those targeted. This also increases the motivation to change behavior. If sanctions are inadequately designed and implemented, on the other hand, they often fail to have the desired effect.

For example, the sanctions imposed on Russia for the annexation of the Crimea in 2014 were a failure. Although they imposed additional costs for the military incursion, they did not force Russia to withdraw, let alone return the peninsula.

As for the sanctions currently imposed on Russia, the number of failures seems to be growing. In this case too, the goal of changing behavior is being pursued ‒ and so far has not been achieved. On the other hand, the costs of the sanctions imposed are more significant for the Russian economy than they were eight years ago. They are likely to lead to one of the most severe economic crises in Russia in the last three decades – most similar to the transformation crisis of 1992. Some economists predict a recession of 10-15 percent. However, these assumptions depend on a number of factors that are still difficult to assess – such as whether Russian companies will be denied access to imports from the West to bring production to a standstill.

The fact that the sanctions have not yet achieved their goal is due not only to the refusal of major economies such as China, India, and Brazil to take part, but also to the fact that Putin and his entourage seem to be largely shielded from punitive measures. Instead, the sanctions are hitting the broader economy, primarily affecting the Russian middle class and poorer sections of the population.

Doubts are also warranted as to whether an oil embargo would significantly increase the pressure on Putin’s regime and decisively disrupt his war plans. True, oil accounted for about 53 percent of Russia’s export revenues in 2021, with more than half of those exports going to Europe. But there were also other factors at play. Firstly, important customers including China and India would not support this embargo. Secondly, drastic increases in the prices of oil and gas ensure that revenues would not collapse even if imports to Europe were stopped. For this reason Europe would probably be cutting off its nose to spite its face if it imposed this sanction – which is why it is meeting with political resistance within the EU. 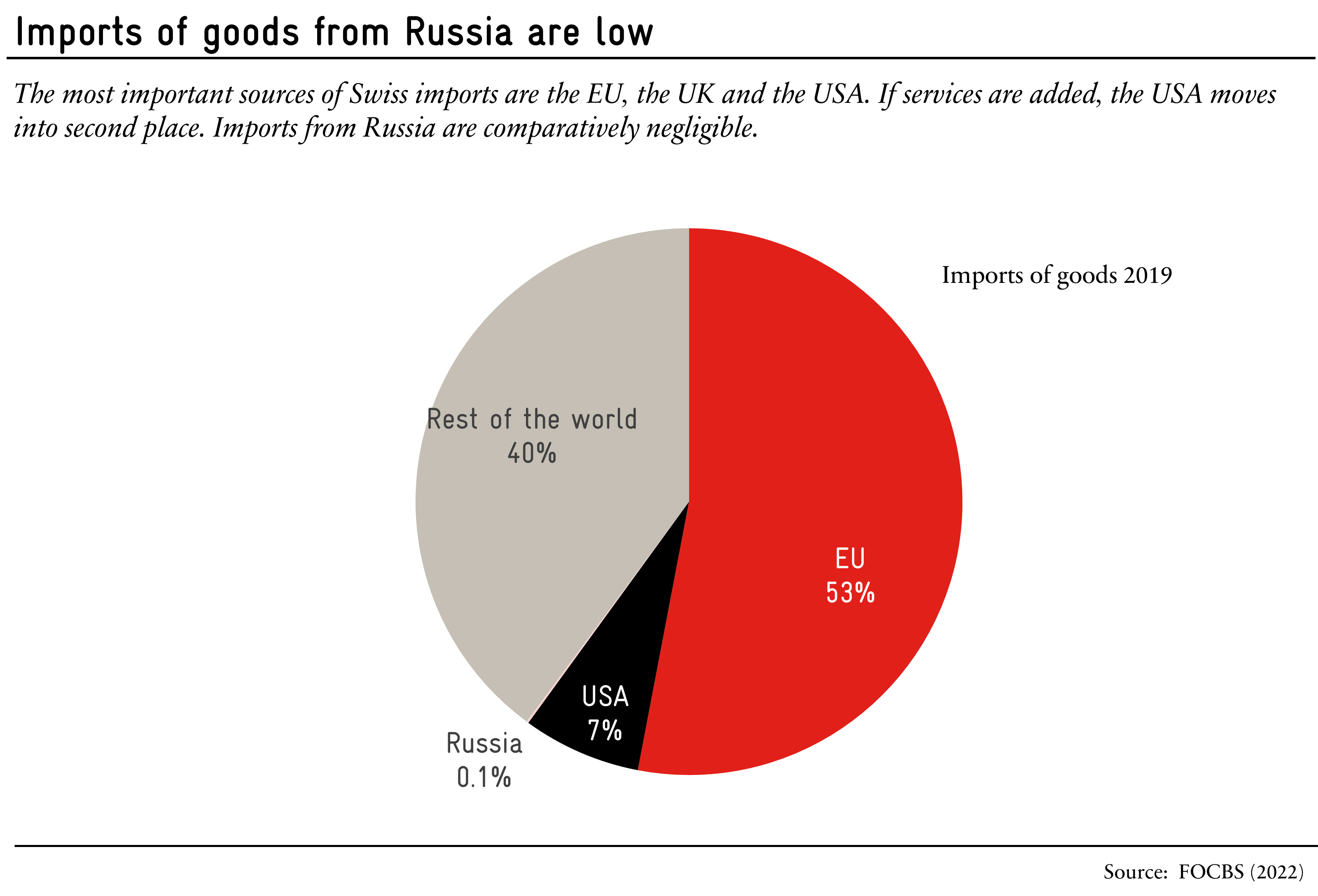 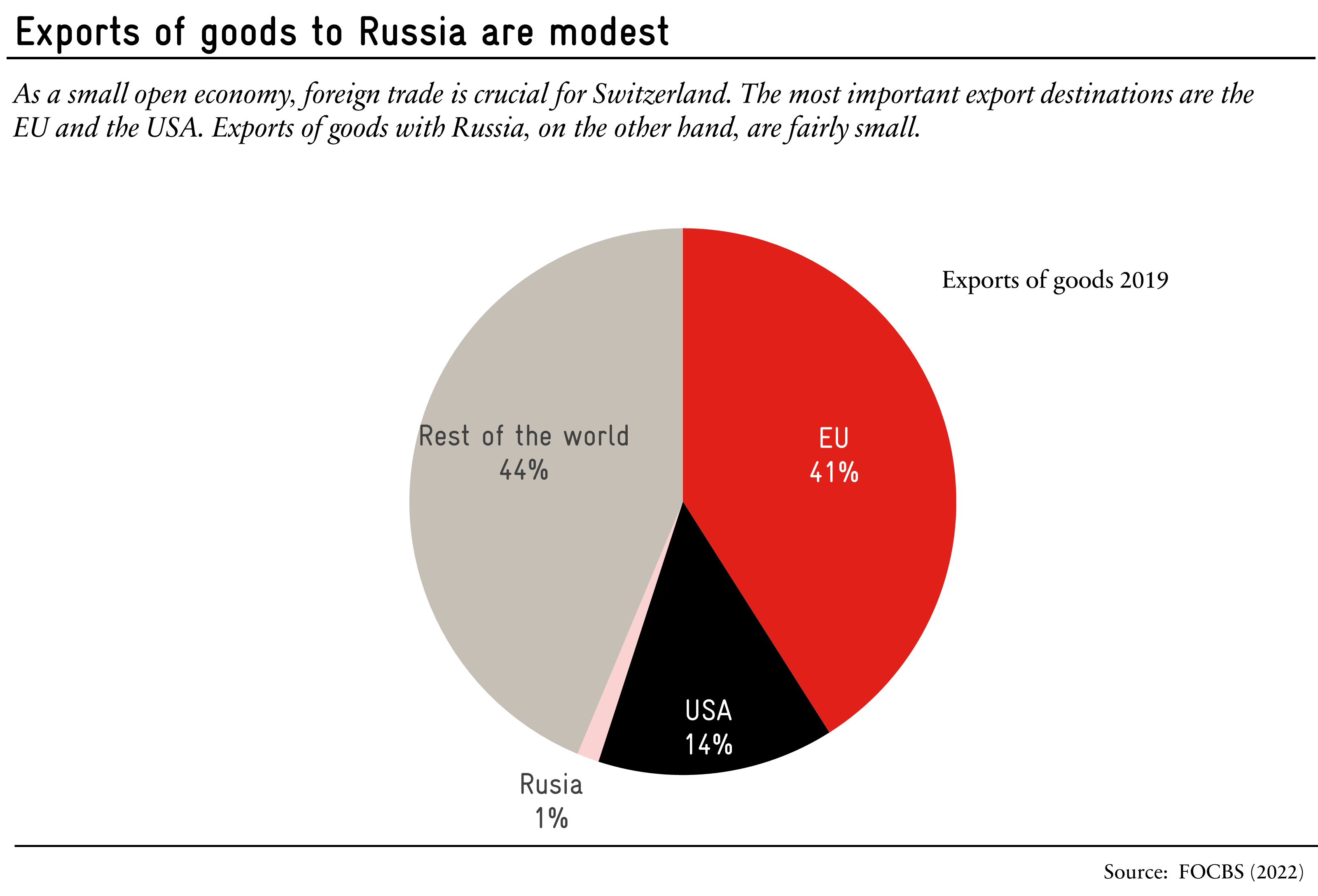 These insights raise the question of why the sanctions are not being lifted, especially not by Switzerland.

From Switzerland’s point of view, the discussion shouldn’t revolve around effectiveness alone. After all, the sanctions imposed by the West primarily send an international signal against the unlawful aggression of autocratic states. The discussion should therefore focus more on the case of Switzerland opting out. If its support for the sanctions were less comprehensive, Switzerland would be implicitly tolerating Russia’s behavior and thus undermining the joint efforts of the West. As a result, our country would suffer a massive loss of reputation among its most important trading partners, the EU and the US. Furthermore, direct sanctions from Washington could be expected: Swiss banks have already been threatened by the US ambassador in Bern if they fail to seize all traceable funds of sanctioned Russians. Similar sanctions could be expected from the EU. 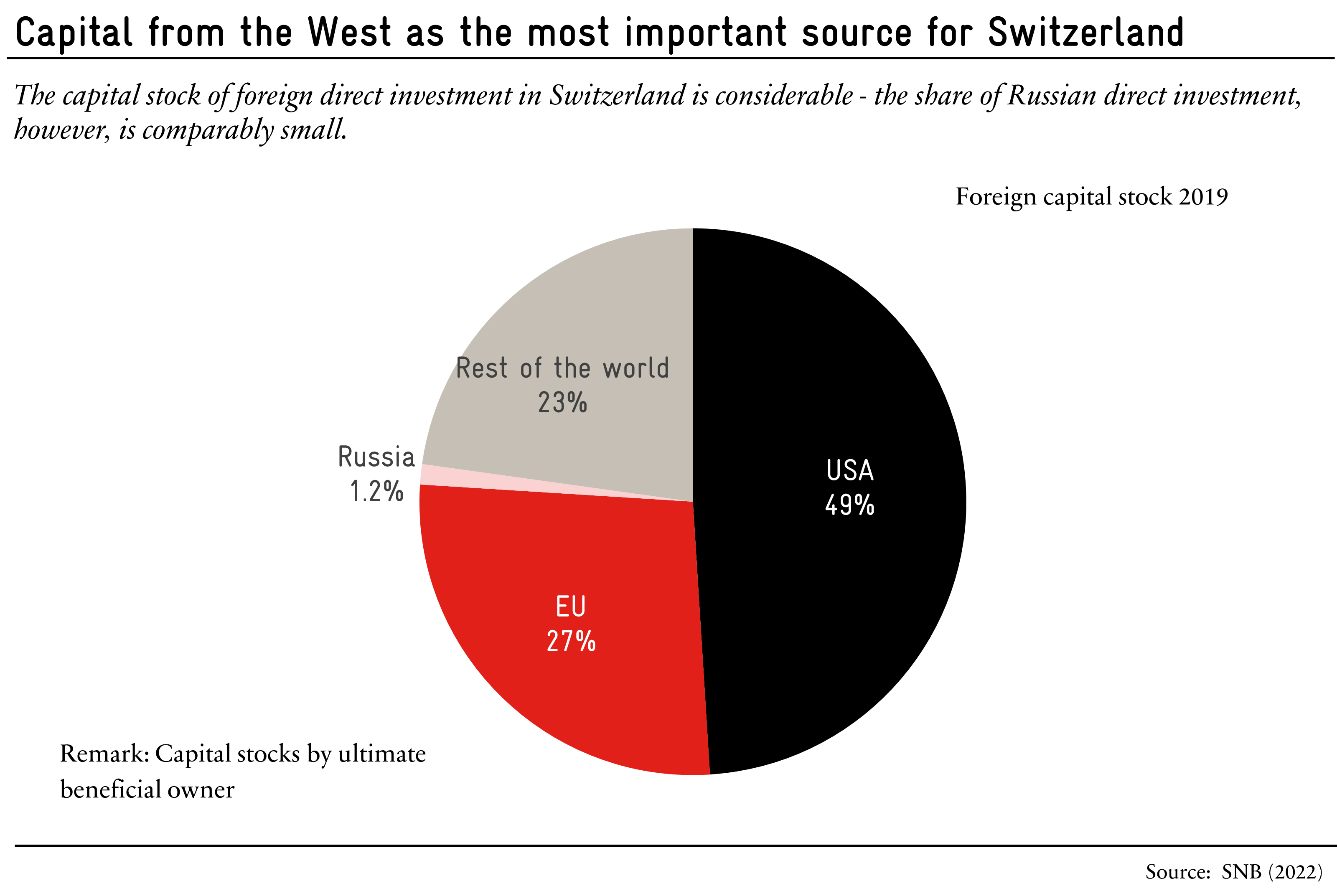 The costs to Switzerland of direct provocation and potential confrontation with the EU and the US would be far greater than those of decoupling from the Russian economy. The fact that Switzerland is much less important to Russia as a trading partner and investor than the EU and US (see chart) illustrates this point.

From an economic point of view, adopting the West’s sanctions is thus a pragmatic solution for Switzerland. However, from the point of view of representing values, Switzerland must not deviate from its previous positioning either; if it did so it would not only harm itself, but also undermine the cohesion of Western democracies.

The reasons for shopping abroad are home grown

Home » How Effective Are Sanctions against Russia?