A A
Blog
Author(s): Gerhard Schwarz and Dominique Zaugg

The year 2015 was an election year for Switzerland. After the votes were cast, media reports proclaimed a shift to the right in Parliament and then in the Federal Council. In actual fact, the result was, by and large, simply a return to the kind of conditions that had previously prevailed for decades. With regard to the economic issues that Avenir Suisse was originally set up to promote some 15 years ago, however, this outcome offers only a small glimmer of hope. Unfortunately, there have once again been far too many violations – actively supported by civil society – against a liberal order and the quality of Switzerland as a location.

The areas in need of improvement that were featured in our studies, articles, events and talks over the past year will probably also remain as such in 2016. It is our job to create the intellectual breeding ground for reforms geared towards personal responsibility, private ownership and competition. There is scope here for development and growth. Our “think tank for lateral, progressive and reflective thinking” has been able to provide some impetus here and there, which has led to some fierce debates and will sooner or later be echoed in legislation. One area our work has focused on is the relationship between Switzerland and the EU. “Bilateralism – what else?” was the diagnosis, based on empirical analysis, that we came up with. We also devoted two studies to Switzerland’s political system, presenting far-reaching proposals aimed at safeguarding the future of the militia system and direct democracy, which are part of our country’s DNA.

Despite our long-term focus, we have no intention of avoiding discussions on current topics – on the contrary, we want to enrich them by adding our own specific perspective. One publication, for instance, examined how to deal with the strong Swiss franc, while one was dedicated to capital taxation and another explored the increasingly pressing issue of work in old age against the backdrop of immigration and pensions. And, of course, we would not be living up to our intended role if we did not provide the occasional surprise too. In 2015, we did this in a purely formal manner with the English-language publication “Watch the Swiss”, a humorous look at Switzerland from an outside perspective, and the graphic calendar entitled “Where is Switzerland now?”. In terms of content, we have once again stimulated debate with the intercantonal “Freedom Index”, with a declaration of support for passive voting rights for foreigners and with evidence demonstrating that the alleged wage discrimination against women in the labour market is to a large extent a chimera. 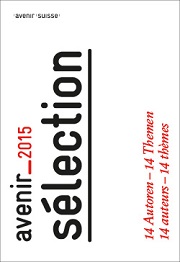 The Activity Report 2015, which is available in German, French and English, encloses the new “avenir sélection 2015” supplement (in German and French), which presents a selection of the best articles by our project managers, with the aim of giving you a clear impression of the broad spectrum of our work.

Author: Avenir Suisse
Author: Gerhard Schwarz
Short Biography
What do you think about this topic? Give your to the authors.