Outpatient Care Is not always Cheaper than Nursing Homes

A change of direction in old age care

In an ageing society, ever greater thought needs to go into to staffing levels amid limited resources. When it comes to old age care, that means trying to improve the efficiency not just of outpatient cover and old people’s homes, but the entire old age care system.

An outpatient AND inpatient strategy

Depending on the circumstances, the cost of daily outpatient cover for the elderly in Switzerland (through the so called Spitex system, ed) is, after 90-120 minutes, higher than the day rate for nursing homes. That’s because homes can use their resources more efficiently: they don’t require any unproductive travelling time for staff, and employees can be deployed efficiently based on their skills. Highly qualified staff can concentrate on nursing while less qualified ones take on more general duties.

So the principle applied until now of “outpatient before inpatient” actually falls short. It presumes outpatient care is cheaper and better, and inpatient cover dearer and worse.

But the care that’s best from an economic and personal perspective always depends on individual circumstances. In a joint position paper, regional organisations of Pro Senectute, Curaviva and Spitex (three Swiss groups involved in outpatient care, lobbying for the elderly and care homes, ed) in canton St Gallen have argued for reforms to combine “outpatient WITH inpatient” cover. The very fact the three groups have adopted a common position demonstrates the extent of the current change of heart.

Taking costs alone – such as the price per minute of inpatient or outpatient care – is not an adequate measure to guarantee an old age care system. 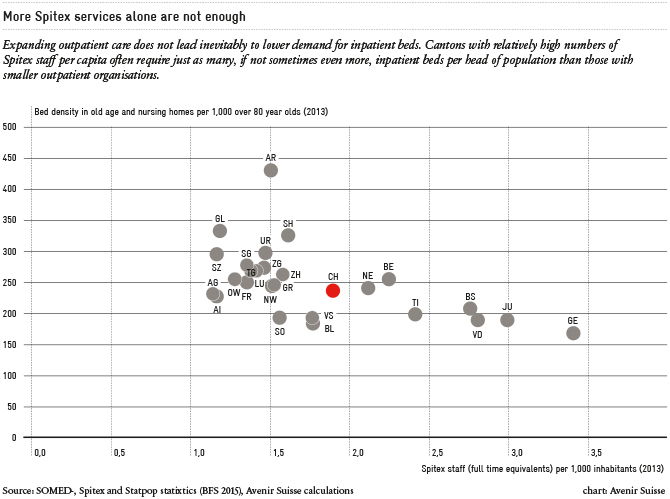 Expanding outpatient care does not lead inevitably to lower demand for inpatient beds. The data shows that cantons with relatively high numbers of Spitex staff per capita often require just as many, if not sometimes more, inpatient beds per head of population than those with smaller outpatient organisations (see graph). The cantons of Solothurn and Basel-Land in German speaking Switzerland both have about 200 care home beds for every 1,000 inhabitants aged over 80 – similar to the cantons of Vaud and Jura in French speaking regions. But the two German speaking cantons employ only about half as many in their respective Spitex organisations as their French speaking counterparts.

Why? Because in both inpatient and outpatient contexts, greater supply tends to spur greater demand. Additional Spitex staff don’t just lead to a substitution of demand for old age and nursing home services. They also meet additional outpatient demand that would otherwise have been covered by relatives, or not been met at all.

Financial reasons also speak for combining inpatient and outpatient cover when it comes to determining the best approach to old age care, as a spectrum of services needs to be co-ordinated. That means, first; targeting nursing homes on heavily care dependent patients – many suffering from dementia. Secondly, creating “intermediate” care options bridging outpatient cover and nursing home admission. And thirdly, it requires an optimised form of outpatient (Spitex) support.

Home » Outpatient Care Is not always Cheaper than Nursing Homes