Privatization & Liberalization: The Debate Is Open! (1/2)

We need new tools to revitalize the Swiss economy

The underlying state of the Swiss economy was not very strong at the end of 2016. The international geopolitical landscape remains unstable and unpredictable, the Swiss franc continues to be significantly overvalued, and economic prospects for increased growth are not very encouraging. The persistent complaints about high Swiss prices have not changed much. Furthermore, the negative interest rates are discouraging deposits with the country’s retail banks.

Switzerland’s export-oriented economy is obviously under significant pressure. Intense international competition forces it to constantly adapt and reinvent itself. This is however not always the case for the country’s domestic market. To the detriment of civil society and consumers, some sectors of the Swiss economy continue to operate under government protection. In this context, the reintroduction of privatization, liberalization and deregulation projects, put on hold since the 1990s, would be of great importance to revitalize economic growth. Avenir Suisse reopens the debate with a new publication by Samuel Rutz: The Myth of the Family Silver: A Privatization Agenda for Switzerland.

The state’s interference in the economy is pushing up prices

Switzerland’s economy is far more state-owned than is generally perceived. In contrast with other European countries, Switzerland stopped halfway in liberalizing the economy, particularly in the telecommunications and energy sectors. Other services typically provided

by private companies (e.g. distribution of mail and packages, banks and financial services, transport, media) are also, or exclusively, carried out by companies belonging (in whole or in part) to the Swiss Confederation, its cantons or the communes. The most notable examples are Swisscom (51% owned by the state), almost all the cantonal banks, as well as energy producing or providing companies. This contributes to the high cost of living and high prices in Switzerland. For example, the Swiss telecommunications market is one of the least competitive among industrialized countries (OECD 2015). Household telecommunication expenses in Switzerland are the highest in Europe. The significant state-ownership of the Swiss economy is inefficient. Some other reasons for this economic hurdle are provided below.

They often pose significant financial risks to public institutions, and therefore the taxpayers. The recapitalization of the Cantonal Bank of Geneva cost the state CHF 2.1 billion and the Cantonal Bank of Bern nearly CHF 2.6 billion. The energy company BKW (Bernische Kraftwerke), of which 82% is owned by the state, saw its stock market valuation lose close to CHF 3 billion in 10 years (since 2005). The downfall of Alpiq (also an energy company, around 30% owned by the state) was even more spectacular. The company’s market capitalization fell from CHF 10 billion in 2010 to CHF 3 billion in 2016.

Public services can be provided without state ownership

It is perfectly possible for the state to lay down commercial regulations that work in the general interest of the public, without being an economic participant itself. For example, it would be possible to require that all telecommunication companies licensed to operate in Switzerland provide their services in the most remote alpine valleys; without this constraints, there is the risk that private supply would be limited to serving (profitable) urban centers and neglecting (less profitable) remote areas. It is not necessary for the state to be the majority shareholder of Swisscom to guarantee this legitimate market-stabilizing objective.

This principle is already well known in the cultural domain. Cantons and municipalities subsidize cultural institutions, which are often privately administered and managed. There is no need for the state ownership of theaters and orchestras, or to turn directors and musicians into civil servants, to ensure and enable cultural public service..

Conflicts of interest are to be expected

State ownership is often characterized by vague, complex or contradictory objectives. State councilors in charge of health in the cantons set the rules for public health for all, but also control the cantonal hospitals, the main service provider of the health system. Where are the checks and balances? To the detriment of consumers, politicians serving on the boards of public energy companies contribute to the maintenance of their monopoly power. Why are politicians protecting the interests of companies and not the interests of the general public?

The case of Swisscom, with its complex set of stakeholders, is representative of the state’s involvement.

The Federal government is a stakeholder at multiple levels: 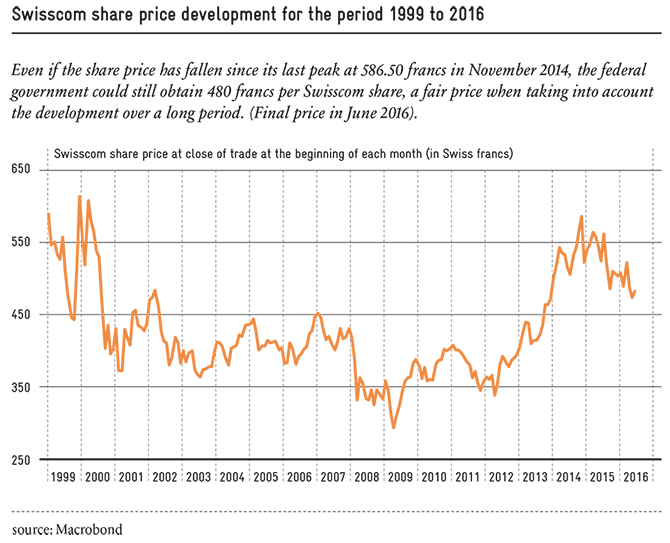 The only solution to reduce these conflicts of interest is for the federal government to focus on its role as a regulator and gradually withdraw its capital from Swisscom. Obviously, this sale should be made at the market price and at a convenient time. The optimum peak value of Swisscom has unfortunately already passed. In his study, Samuel Rutz calculated that if the Confederation had sold its shares in the company at the time when the other European countries liberalized their telecommunication sectors (late 1990s), its share pay-out would have been worth 8 billion francs more (not including the interest accrued since).