A A
Blog
Author(s): Franz Schellhorn

When Swiss voters decided in a referendum almost two and a half years ago against granting themselves six, rather than the until then normal four, weeks annual paid holiday, the reaction in Austria, Switzerland’s eastern neighbour, was one of deep unease. Serious doubts were expressed about the mental health of the otherwise so highly regarded Swiss. How could anyone in their right mind vote against more paid free time?

This basic thought alone left Austrians, coddled by their welfare state, shivering. What does it mean for us if even the rich Swiss don’t want to, or can‘t, afford six weeks paid leave? Is it us Austrians who’re ultimately the stupid ones because we can’t see that that we, as employees, must earn any paid increase in free time ourselves? The same applies to all those other state financed giveaways – from the new village swimming pool to the “free” brace from the health insurer to widescale early retirement.

Searching for the fundamental difference between the two neighbouring alpine peoples, it is to be found in the fact that the Swiss are a bit like collectively thinking individualists, with an enviably grown up attitude to the state. By contrast, we Austrians are like individualistic collectivists, who may like to say “we’re the state”, only then to confuse at every opportunity the public exchequer with some sort of automated teller machine miraculously refilled out of the blue by that nice central bank governor. It’s the apparently deeply anchored basic assumption that financial lollipops doled out by politicians actually have to be earned and paid for by the people that’s become lost on us Austrians and makes Switzerland so unusual. 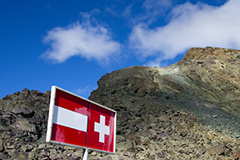 For Franz Schellhorn, the Swiss are a bit like “collectively thinking individualists with an enviably grown up attitude to the state.” (Picture: Fotolia)

In Switzerland, one’s pretty much an exception if one thinks the general well being comes from a central bank’s vaults. And as people in Switzerland also realise, today’s public spending means tomorrow’s tax increase: that new public swimming pool isn’t a “gift” from the ruling party.

It’s facts as banal as these that explain why, even during the global financial crisis, Switzerland’s state finances remained in surplus, unlike almost everyone else’s. In Austria, the federal budget (excluding regions and municipalities) hasn’t seen a surplus since 1962 (let me spell that: nineteen sixty-two). In fact, only in four years since 1945 has an Austrian finance minister managed to close the year with black ink.
The two countries’ sharply different attitudes to the state are also illustrated by the flare up in Austrian demands to abolish federalism. “Too expensive for such a small country”, is the refrain. But what Austrians understand as federalism is not real federalism. Rather, it’s a combination of centralised revenue gathering (taxation via the federal government) and federalist spending that’s run out of control – about the most expensive way to finance a state you can find on Planet Earth.

How it can be done better is shown by – guess – Switzerland. Our neighbour has developed a federal system based on real competition, with different tax rates in different cantons and grass roots level responsibility for spending, leading to a prudent approach to dealing with citizens’ money. And that has nothing to do with size. Although their populations are virtually the same, Switzerland has about three times more cantons than Austria has federal regions, somewhat less than twice as many local administrative regions and about 50 fewer municipalities – all run for at least one third lower cost.
By here at the latest it must be clear why the Swiss give us Austrians the creeps. We’re a bit like a slow child, who’s constantly shown its “perfect” sister as an example. “Just look how well Switzerland does it!” After a while, that sort of thing starts to grate. So all the better, when, from time to time, the Swiss themselves deviate – like, for example, when these fundamentally freedom loving people see themselves threatened by the minarets of local mosques. That takes a bit of the pressure of us mediocre neighbours.

Even if there’s no reason to glorify Switzerland, there’s no doubt its citizens have, in the past 20 years, got a lot right. We, by contrast, have omitted to do so much the same. But then, Austrians don’t need to vote on six weeks paid holiday – for many of our workers, that’s long been reality.