This year’s annual dinner for the sponsors of Avenir Suisse, held at Kunsthalle Zurich, focused on the future of the pension system. There can be no one better qualified to talk about this subject than guest speaker Alain Berset, Swiss Federal Councillor and Head of the Federal Department of Home Affairs. After his presentation he answered questions from Gerhard Schwarz and Jérôme Cosandey of Avenir Suisse and engaged in discussion with the audience.

This year’s annual dinner for the sponsors of Avenir Suisse, held at Kunsthalle Zurich, focused on the future of the pension system. There can be no one better qualified to talk about this subject than guest speaker Alain Berset, Swiss Federal Councillor and Head of the Federal Department of Home Affairs. After his presentation he answered questions from Gerhard Schwarz and Jérôme Cosandey of Avenir Suisse and engaged in discussion with the audience. 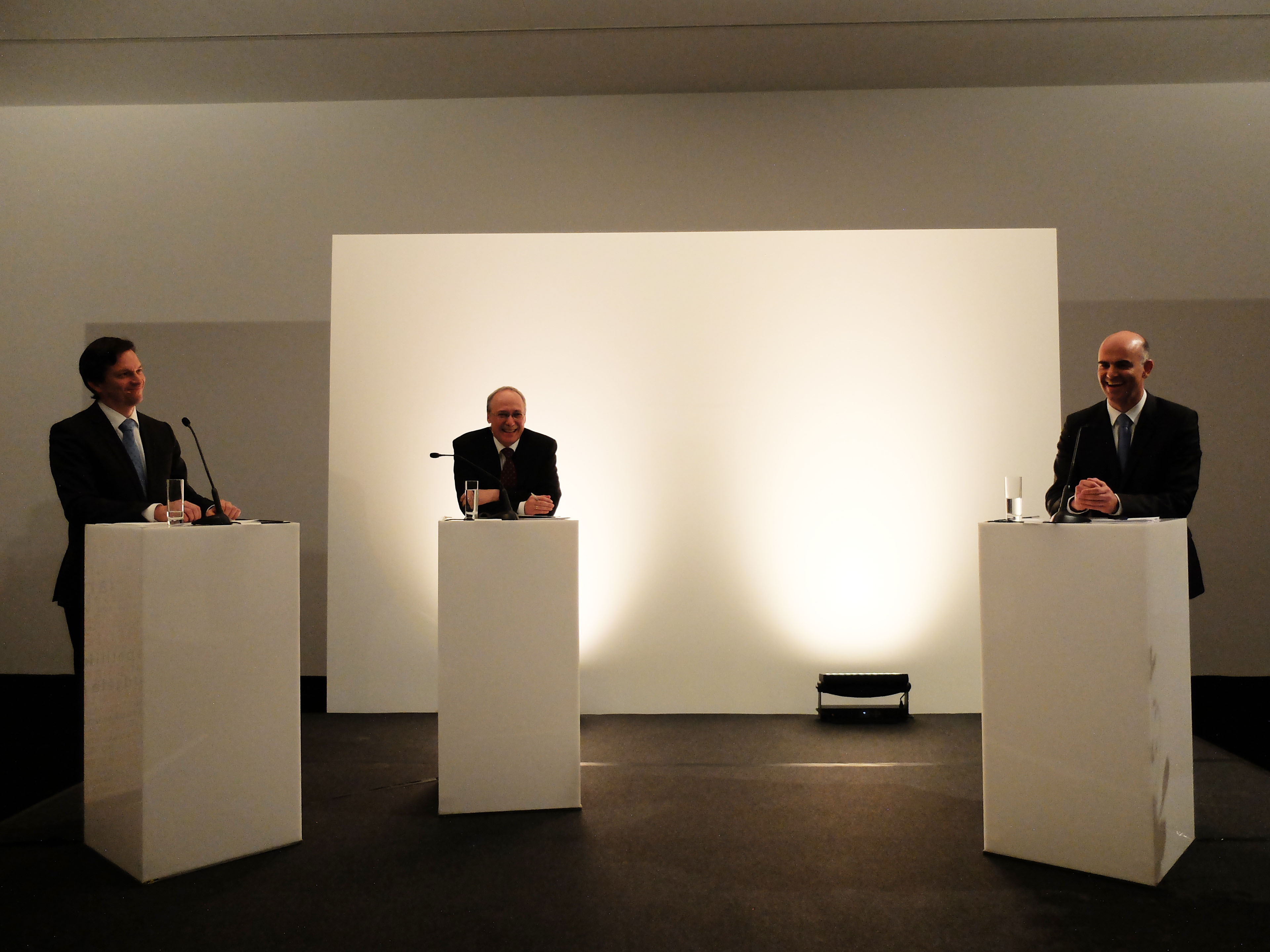 “Politics is the ability to foretell what is going to happen tomorrow, next week, next month and next year. And to have the ability afterwards to explain why it didn’t happen.” Taking his lead from this Winston Churchill quote, Federal Councillor Alain Berset opened his remarks on the Altersvorsorge 2020/prevoyance vieillesse 2020 project at Avenir Suisse’s annual dinner with a look back. Voters’ rejection of every single pension reform of the last 15 years, he said, was largely down to the fact that the proposed changes were so narrow in scope. Isolated measures such as lowering the conversion rate or harmonising the retirement age for men and women have given political opponents too much room for tactical manoeuvre. This has to stop. In introducing its Altersvorsorge 2020 plans for pension reform, he explained, the Federal Council had deliberately put together a package covering both the first and second pillars. Taking a holistic view will facilitate new political compromises. Switzerland simply cannot afford another 15 years of stalemate.

Looking beyond the legislative period

From Berset’s presentation it emerged that the name “Altersvorsorge 2020” has a dual thrust. Firstly there’s the sword of Damocles effect. By 2020 at the very latest – and this is something all the forecasting models agree on – the financial pressure on social security institutions will start to increase massively as a result of the ageing population. Without reforms, Berset claimed, we could expect the AHV/AVS alone to be posting an annual deficit of CHF 8 to 10 billion a year. Secondly, “Altersvorsorge 2020” is a clear message to politicians that this reform will absolutely involve looking beyond the legislative period, even if earlier implementation would of course be preferable. In an ideal situation, said Berset, the bill would go before parliament by the end of 2014.

“What makes you so confident?” asked Gerhard Schwarz. After all, voters often seem to have problems with entire packages, with 66% against the tax package, for example. Jérôme Cosandey also had criticisms of certain aspects. He asked whether the reform wasn’t much too generous (citing the proposed compensation for everyone under 40 for the lower BVG/LPP conversion rate, or the plans to increase AHV/AVS benefits for low to mid-earners), and much too slow as well.

Any movement is better than standing still

The entire Federal Council, countered Berset, has one goal in its sights: to end the reform gridlock. If this doesn’t happen, Switzerland will soon have enormous problems on its hands. So it’s important, he said, to put together a balanced package, and to get all stakeholders – including the cantons – on board. He said he believed points such as the statutory retirement age to be of only limited relevance, because they say little about a reality where men in Switzerland retire on average at age 64.1, and women at 62.6. So it’s important to modify the incentives to encourage and enable people to keep working longer of their own accord. Berset said that increasing pension fund contributions from age 55 weren’t helpful in this respect. He also made it clear that, in his view, financing part of the reform via a 1% increase in VAT was the least bad solution, and preferable to increasing income tax or social security contributions. After all, he pointed out, it’s the country’s social harmony that’s at stake. As for the pace of reforms, the social security minister acknowledged that the intensive negotiations involved in preparing a reform took time, but that in Swiss politics, where fortunately the people still had the last word, there was no way around this lengthy process.

At one point in the discussion Berset, who as minister of culture is also responsible for film, interjected, “You’ve got to film a good movie right to the end, otherwise it’s a bad movie.” As a member of the audience one got the impression that he’d written his script for Altersvorsorge 2020 with great attention to detail. Whether everyone involved – the crew and the cast, and most importantly the producers – will now be prepared to film the movie right to the end, to a point where the majority of voters are in favour of the reform, is still open. But several times during the evening Berset emphasised that this was the most important thing for him, and that he would also be prepared to change parts of the script to make it happen.

Integrating disability cases into the workforce pays off

The unanswered questions about the lockdown


At Avenir Suisse, Dr. Verena Parzer-Epp is the Director of Communications and Events. She graduated from the University of Innsbruck with a degree in Economics and Slavic Studies, and gained her first professional experience in the financial industry as well as economic research and funds management. She spent the next couple of years with the business and economics team at Neue Zürcher Zeitung and an ICT start-up before she joined Avenir Suisse.

More from Verena Parzer-Epp
What do you think about this topic? Give your to the authors.