A A
Blog
Author(s): Julian Kamasa

It is 30 years since 1989, that year of symbolic transformation in Europe. The peace dividend that followed the end of the Cold War still applies. But the geopolitical struggle for power has seen a renaissance apparently inconceivable a few years ago.

The geopolitical balance of the 21st century is based on a fundamentally different rationale to that of the Cold War. Global power is no longer projected exclusively through a county’s number of aircraft carriers, its media information monopoly or its economic performance.

Today’s geopolitics 2.0 operates at the technological level, in virtual space and in resilience to non-state actors. That levels power between big nations and other state or non-state actors. The terrorist attacks of September 2001 and the wars in Iraq and Afghanistan have shown military technological leadership no longer guarantees strategic success. Weaker actors have gained relative power by harnessing opportunities for action arising from asymmetric power relations. 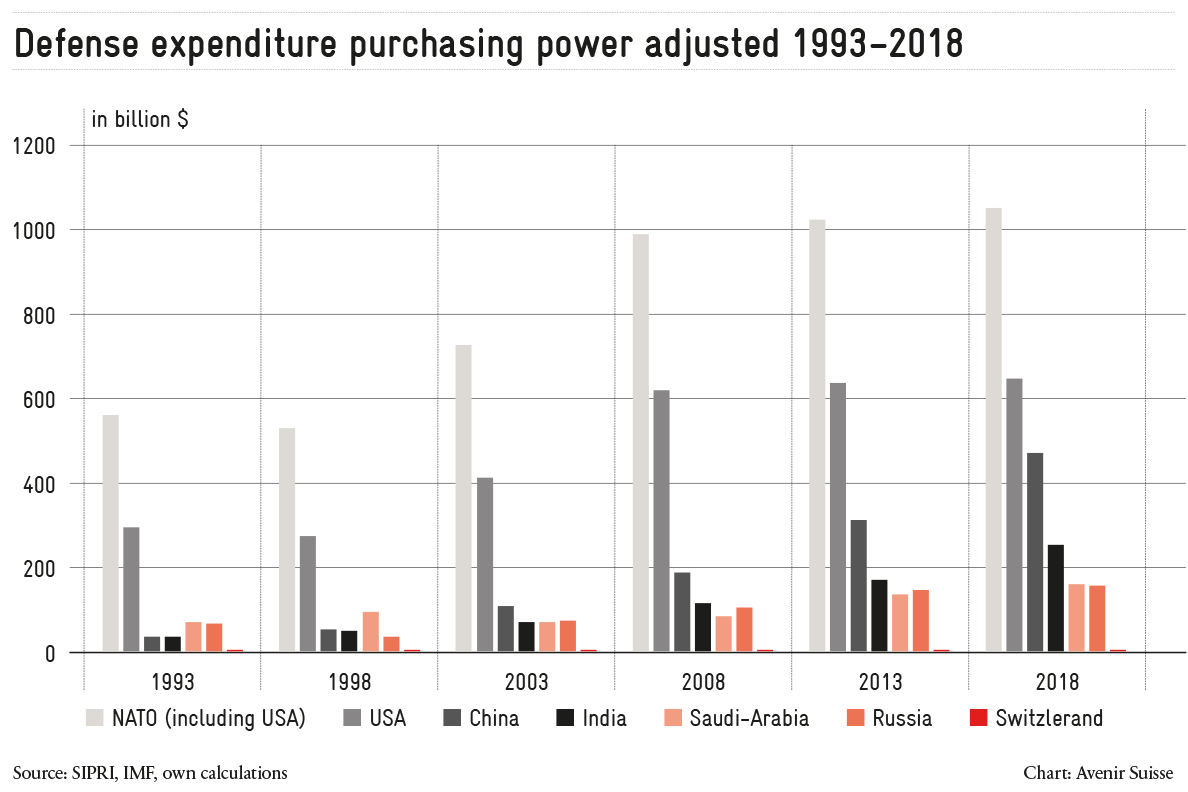 At the same time, countries such as China have caught up in terms of innovation, research and development (including militarily). Compared to 1993, Beijing increased its defense spending, adjusted for purchasing power, by 1249% and the USA by 118%, closing the gap (see chart 1).

But instead of countering China’s military rise through more multilateral cooperation, “America First” appears based on bilateral deals and the gradual devaluation of multilateral institutions. Hampering the ability of institutions like Nato, the WTO, and the G-7 and G-20 to operate can lead to a so-called “G-zero world” without clear liberal leadership in the medium to long term.

A G-zero world combined with geopolitics 2.0 will not revive former interstate patriotic wars (see chart 2). But challenges such as international terrorism, cyberattacks, climate change and major migration can only be solved multilaterally. In future, security will not be created in G-zero world isolation, but through international cooperation. 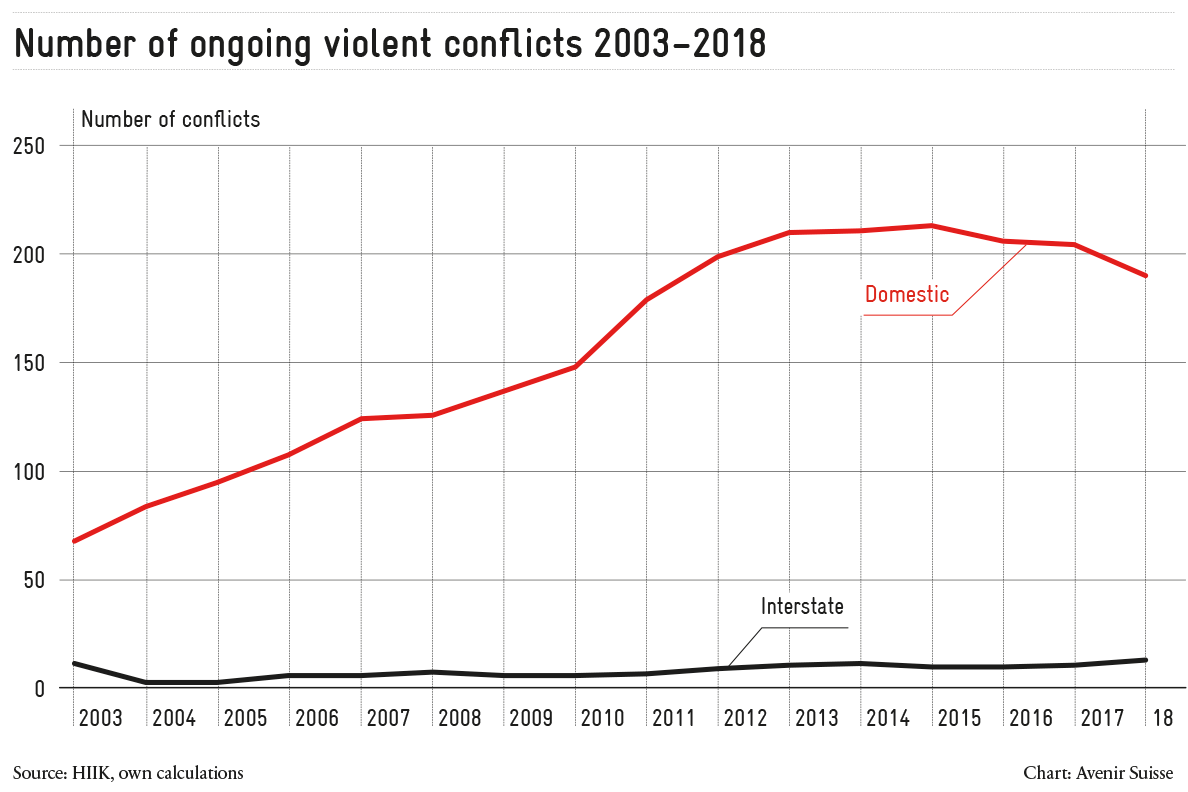 What does this mean for Switzerland? Traditionally, a small state cannot keep up with its biggest counterparts in conventional arms. China spends in three days what the Switzerland does in a year, adjusted for purchasing power. But in addition to trade and an active role in multilateral institutions fomenting peace, Switzerland has military options to use its asymmetry with major powers to its advantage.

That is possible above all by proactive deterrence in technical fields such as cyber defense and intelligence information. Despite its neutrality, Switzerland will not be able to completely escape geopolitics 2.0. So the country’s current political focus on arms procurement and on challenges to the draft from civilian service should be expanded. 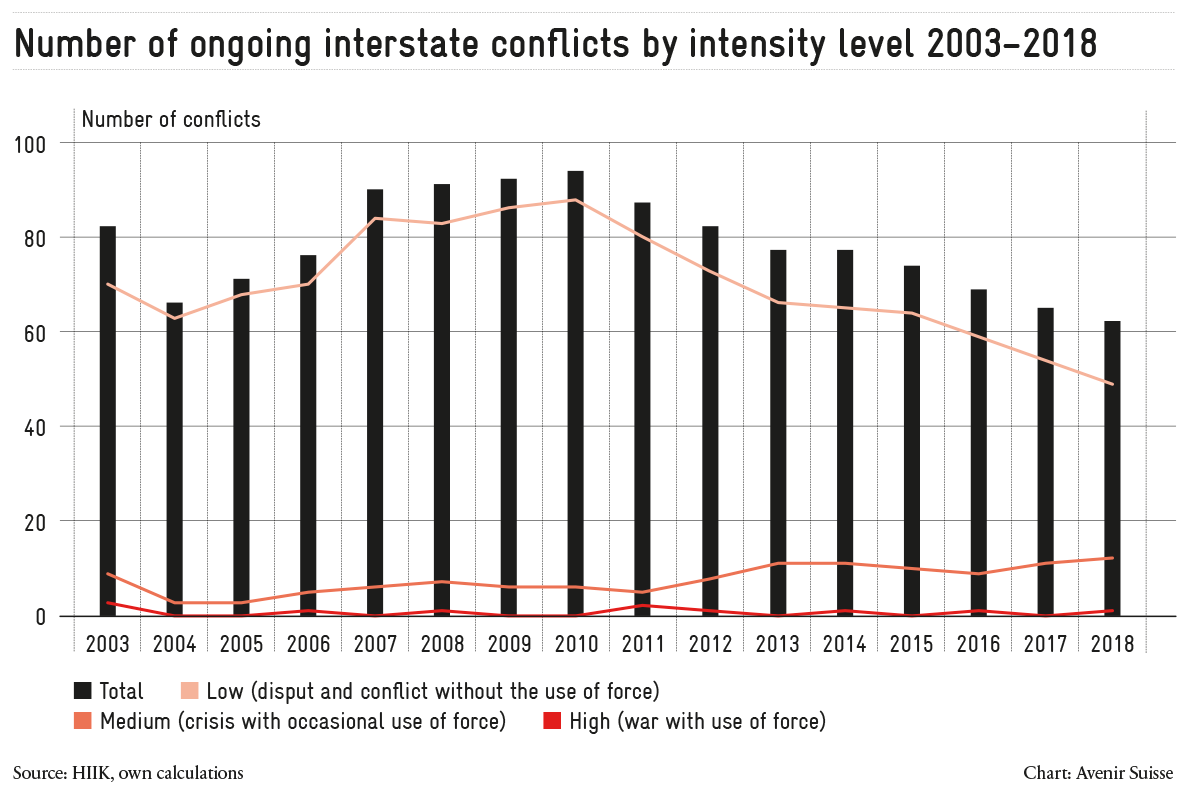 Pragmatic and comprehensive approaches are required

Five points should be considered. First, Swiss defense policy needs a clear strategic profile geared to future threats rather than heritage protection. Given geopolitical power shifts, the relationship between the country’s various security organizations (army, civilian and military intelligence) and the outside world (cooperation with Western intelligence services, Nato, the possible future EU defense union) should be defined more transparently. The recent decision to take part in the Nato Cooperative Cyber Defense Centre of Excellence is a positive development – which could have been made sooner.

Secondly, Switzerland’s security policy should be defined in broader terms. Trade, education and labor market policies also create security. As economic interdependence increases, material incentives for potential conflicts fall. Moreover, the capacity of the Swiss education system for social integration should not be underestimated. Well-trained, enlightened people who participate in the labor market are unlikely recruits for terrorist networks.

Thirdly, cyber defense should focus on critical infrastructure. A cyber-security cluster of government, research and the private sector could also benefit the broader economy. A stronger focus on virtual space and on technological progress would reduce requirement for ground troops and increase their quality.

Fourthly, there is no evidence Switzerland would be less able to defend itself with fewer soldiers. As a Nato member, the Netherlands is heavily exposed and has twice the population of Switzerland. Yet the Dutch army comprises 61,094 troops, including reserves. A quarter of them are militia soldiers, while women comprise 13.6% of the total. For most future security challenges, large numbers of conventional soldiers will no longer be decisive. An army specialized in real threats will be what counts.

Fifth, compulsory military service for men needs to reflect social realities. When introduced, women had neither political rights nor a high degree of integration in the labor market. The proportion of foreigners was also significantly lower than today. The militia army’s function of providing social cohesion alongside security is reaching an ever smaller proportion of the population. With a clearly defined operational mandate, the army could focus on providing security with fully motivated personnel. Social cohesion could be ensured by some form of civic service that could involve foreign nationals and Swiss women. This would depoliticize the relationship between military and civilian service.

Our defense policy often appears hidebound in its risk assessment. The old concept of retaining a Réduit – a final bunker – for example, reflected the technical realities of the First World War, but not those of the Second. Field Marshal Bernard Montgomery, the British commander, judged the Réduit an “unfeasible nonsense” (Allgemeine schweizerische Militärzeitschrift, No. 9/1987) because civilians and industry in Switzerland’s densely populated regions would have had barely sufficient protection from a Nazi invasion.

Today’s security environment is much more stable than in the 1940s. Nevertheless, Switzerland would be well-advised to take a proactive approach to changes in the global security landscape and shape reforms transparently.

Author: Julian Kamasa
Short Biography
What do you think about this topic? Give your to the authors.