Everyone knows how the value of Swiss electricity producers has crashed in recent years. Developments on the international market have turned former public sector cash cows into risky assets. But what the public generally doesn’t appreciate is quite how heavily exposed the public sector is to energy, and how eventual losses should be apportioned. Our groundbreaking research shines some light on how high the losses for various public sector owners have been.

Firms for one franc

While private companies have to follow international accounting rules and mark the value of their holdings to market, different rules apply to cantons and municipalities. Many of them book their stakes at nominal value – leading to holdings in electricity generators valued at SFr1. Others list extensive holdings in companies with sales in the billions at a low double digit million figure. Such modest valuations make adjustments virtually unnecessary – stifling any public debate over the rationality (or irrationality) of having such public sector holdings in the first place – as there isn’t enough information about valuations to begin with. But it’s especially important to have current data in cases where public sector holdings have historical reasons only and are now held simply as financial assets.

After calculating the value of public sector stakes, the second step involves assessing the degree of state involvement in the energy sector. There are also often cross shareholdings, with public sector ownership of generators that in turn hold shares in others. Moreover, the calculations do not reflect potential reciprocal guarantees or voting rights restrictions. While the figures for individual cantons or municipalities should be broadly accurate, individual cases may not reflect the dozens, possibly hundreds, of often very old agreements whose details are available only to the contracting parties. 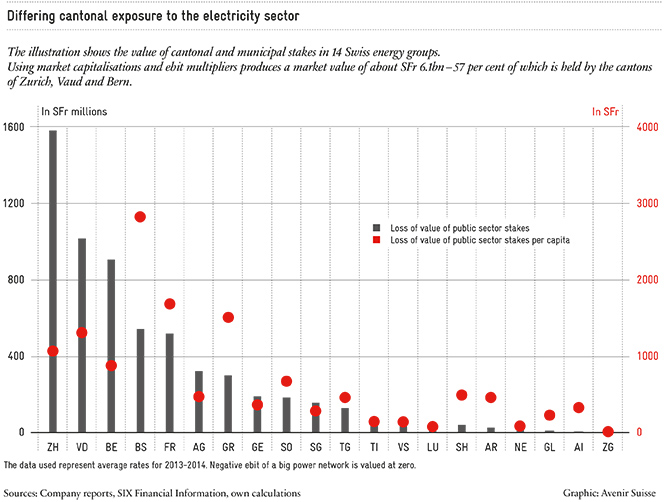 Three cantons own more than half

The graphic above shows the value of energy sector holdings by canton (and municipalities where possible) It reveals big differences.  Zurich, at the top of the scale, currently holds direct or indirect stakes worth at least SFr1.6bn Glarus, towards the bottom end, has stakes worth just SFr10m – a value inferior only to smaller Appenzell Innerrhoden (SFr5.7m and Zug (SFr5.2m). At about SFr43 a head, Zug has the lowest per capita figure.

The current aggregate value of SFr6.1bn reflects the broad falls in electricity sector valuations over recent years. While the earnings (and losses) of big generators have received some media attention, there is less clarity about the valuation losses of affected individual public sector shareholders –  how much public wealth has been wasted.

Switzerland as a price taker

The graphic below shows the loss of value of cantonal and municipal shareholdings between 2010 and 2014, based on mid valuations for 2010-2011, compared with those for 2013-2014. Changes in value also depend on factors outside Switzerland’s control. Electricity generation is anything but risk free: Switzerland is a “price taker” as wholesale electricity prices are not set domestically, but in the wider international market.  So cantonal or communal attempts to influence energy policy cannot succeed. 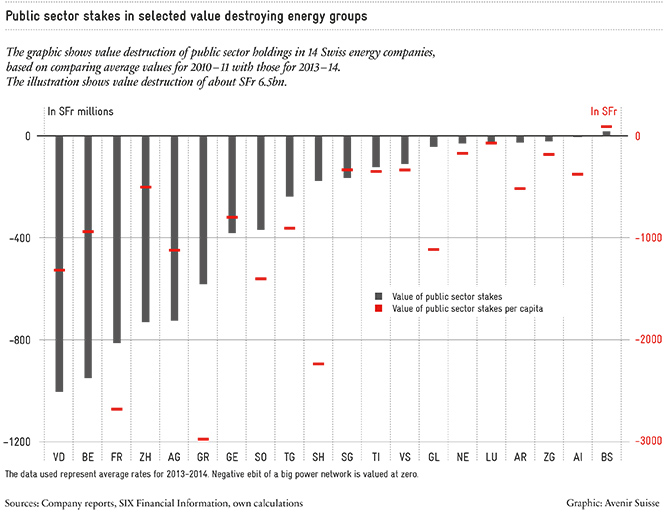 Public sector holdings lost about SFr6.5bn since 2010. The extent differed significantly by canton: The value of shares held by Vaud and its municipalities dropped by SFr 444m and SFr560m respectively. Had the canton and municipalities followed normal private sector accounting practices, there would have been a loss of value of SFR1,319 per head of population.

Bern’s losses are as impressive: the canton’s holdings fell by about SFr1bn, or SFr941 per capita. Graubünden’s loss of SFr583m looks smaller, but amounted to SFr2,974 per head. Luzern emerged best on a per capita basis, with a loss of just SFr73 – or a total of about SFr29m. By contrast, Basel-Stadt managed a modest increase in value.

However, this is not the full picture. There are public sector stakes in dozens of other electricity sector companies, for which data is lacking – and therefore not included in this survey. Their business models often depend on selling power on, at a generating cost plus margin basis, to a contracted customer which cannot purchase supplies on the open market. Should the market be wholly liberalised – and that’s at least the long term political goal – such generators would also be likely to lose value, unless they revised their business models to make them less dependent on this part of the market. Consumers, by contrast, could count on lower electricity prices through liberalisation The situation highlights the conflict of interest facing the public sector as both regulator and shareholder.

Not a good business

State holdings in the energy sector are not just questionable from the regulatory and economic angle; they’re also bad business. The international electricity market requires highly dynamic owners and decision making. Public sector holders are a barrier. Historically, state participation made sense given the importance of secure supplies, and the industry’s forbidding long term investment needs. But those are weak arguments today. Supplies can be ensured via international power networks, eliminating any need for state owned energy companies. And private investors can easily be found for big and long term infrastructure projects.

Selling public sector holdings would relieve taxpayers of corporate risks – particularly relevant when many generators are trying to diversify earnings and enter businesses that also lack any historical justification for state involvement.

Quoted groups can be valued by market capitalisations. The worth of others can be estimated via price/earnings multipliers. We used a factor of seven, based on earnings before interest and taxes (ebit). In both cases, mid-values for 2013-2014 were used to smooth out distortions.

The appropriate ebit multiplier can be disputed: our figure is lower than that applicable to quoted Swiss electricity companies to reflect the lack of a liquid market. Multipliers tend to undervalue the significance of fixed assets in the energy sector.

In spite of these limitations, the methodology is an appropriate and relatively simple way to establish common sense valuations for the companies concerned.  Sector-specific multipliers are often used in takeovers for initial, broad estimates.

Author: Natanael Rother
Short Biography
Author: Patrick Dümmler
Senior Fellow, Head of Research "Open Switzerland"
Short Biography
What do you think about this topic? Give your to the authors.