The Hidden Treasure of Geneva

Switzerland as a base for international organisations

“Liberals must play an active part in politics and put down markers before others do.” So Andreas Schmid, chairman of Avenir Suisse’s foundation board, welcomed the many friends and sponsors gathered for this year’s meeting at Fifa’s Sonnenberg Convention Center in Zurich.

The choice of venue was not fortuitous. As Gerhard Schwarz, Avenir Suisse’s director, put it in his welcoming remarks, resident international bodies, like the world football federation, bring Switzerland enormous economic and foreign policy benefits.

“Geneva is Davos, but on a daily basis”, quipped a Swiss diplomat once. That’s still the case today, but the challenges facing the sector have risen: high living costs, the overvalued Swiss franc and the growing ambition of other regions – especially Asia – have all risen massively, piling competitive pressures on Switzerland as a base for international organisations. 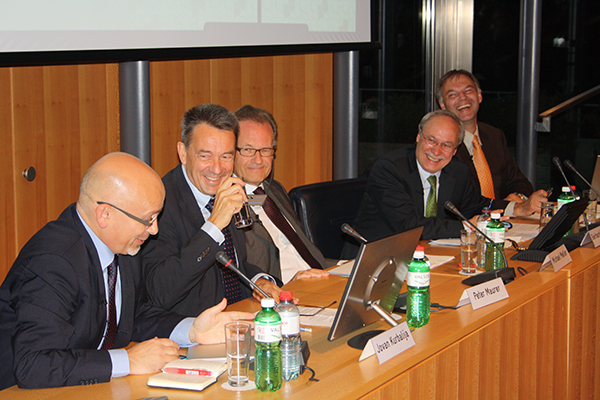 Michael Møller of the UN made no bones about the mounting outside threats. One big problem was the media’s and public’s limited knowledge about the work done by international organisations. He even wondered occasionally about how little UN Headquarters in New York knew about Geneva’s significance. But even if China has built a “UN City” near Beijing, Switzerland, especially Geneva, would remain a key hub. Many negotiations would still take place here (in the best diplomatic tradition), well away from the public eye, with Switzerland’s political neutrality continuing to play a central role.

Switzerland, in contrast to some other places, had no “hidden agenda”, helping to build trust among foreign negotiators and to find solutions. All things considered, with its “identity of peace”, the country offered good value for money and a thoroughly reasonable headquarters location in the boarder perspective.

That Swiss citizens should question the domestic value of organisations was legitimate. That obliged the organisations themselves to make a better job of disseminating their message. “We need to become more relevant to people”, he acknowledged. The world was beset by enormous challenges; intervention in crisis areas devoured huge sums. The impact of massive budget cuts at the World Health Organisation was, sadly, becoming only now evident in its more limited room for manoeuvre in the Ebola crisis.

Peter Maurer, the ICRC president, opened by noting it was the first time in his 28 year career he’d ever participated in a Zurich event about Geneva’s international role. ((Switzerland’s biggest and second biggest cities by population are often presented as commercial and cultural rivals, not least because of their language differences, ed))

Generally speaking, Geneva’s special situation as a home to international bodies seldom played a significant role in Switzerland’s domestic economic policy debate. Discussion, when it occurred, tended to be limited to the infrastructure costs incurred. What was all too often forgotten, he noted, was that it was by no means self evident that international organisations should be based in Geneva at all.

Maurer called on Swiss politicians to make more of the “Swiss” brand, which contained great value. In the same breath, he suggested Avenir Suisse should conduct a cost-benefit analysis of international organisations. The ICRC, like some others, would in future shift additional administrative functions out of Switzerland to cheaper locations. But there were still plenty of new opportunities for Geneva to attract others. He saw chances in so called “know how transfers” between companies and universities (Public Private Partnerships) and in bulking up as a centre for civil society in a politically unstable world. Maurer even asked whether it might not be possible to “internationalise” Geneva in much the same way as Klaus Schwab had done with the World Economic Forum ((the WEF, best known for its annual Davos conference, was created by Prof Schwab and is based in Geneva, ed)).

Jovan Kurbalija, director of “Geneva Internet Platform”, left no doubts about his faith in the city’s potential. He argued it could become a European “Bay Area”, alluding to the Californian technology hub. Three factors had prompted the San Francisco area’s rise: the security and protection of intellectual property; innovation and proximity to universities; and investment. After the revelations by former US computer whizz Edward Snowden, the internet sector’s focus was now shifting towards data protection. That represented a big opportunity for both Geneva and Switzerland as a whole. The fact that the country could look back on 200 years of peace counted a lot for companies.

Most speakers from the audience agreed Switzerland should step up and improve its efforts to attract international organisations. Such statements could indeed be taken as marketing for Switzerland’s international-mindedness, reckoned Gerhard Schwarz in his closing remarks That had indeed been the intention, given the choice of subject and discussants. But, just as good ads can contain useful information, so it could be said that Avenir’s Suisse’s discussion had been a good advertisement too.

Home » The Hidden Treasure of Geneva