The economic importance of commodities trading around Lake Geneva is hard to miss. Seven of the top 10 companies by revenue are either traders or closely linked. Five, including Vitol, Trafigura and Cargill, are Geneva based, while Nestlé is in nearby Vevey. Indeed, almost two thirds of all the commodities companies in Switzerland are located in the cantons of Geneva and Vaud.

The commodities cluster comprises both traders and closely related activities, like banking, insurance, shipping and goods inspection. They generate thousands of jobs in Geneva – though giving an exact number is hard and depends largely on definitions. Estimates put the total between 7,600 and 36,100 spread across Switzerland. Moreover, these are high quality jobs, generating some 20 percent of total individuals’ tax revenues. The Lake Geneva region leads globally in physical commodities trading (see graphic), trade finance and testing. In all, some 22 percent of the world’s commodities transport is conducted through the region.

The cluster has a long tradition. As early as the 1920s, manufacturers around Lake Geneva, like Nestlé, Cohen (nuts) and Schilter (coffee), attracted trading companies seeking to benefit from their proximity to their biggest customers.

During the Cold War, the region gained from its neutral status between Western and Eastern blocs. This was when inspections group SGS settled in Geneva, monitoring the execution of the Marshall Plan from neutral ground.

From a Western point of view, Geneva was ideal for establishing and maintaining trade relations with the Eastern Bloc. Simultaneously, ever more US companies set up branches in the area. Swiss neutrality, the free tradability of the Swiss franc, intact infrastructure, a location between American and Asian time zones and proximity to important ports all helped.

Clustering was also aided by attractive taxes, a high quality of life, international networks, a well linked airport and access to specialized professionals and training. The University of Geneva, for example, offers a masters course in commodities trading. Political stability and high legal certainty helped.

All those factors aided Geneva, which was already an established financial center, gain ground in specialized trade finance. The rise of the region was probably also assisted Switzerland’s creditor-friendly legal system. When banks lend to a commodities trader, the shipload is deposited as collateral, reducing the bank’s risk.

The cluster’s future depends on how well it can compete with rivals like London, Houston, New York, Singapore and Dubai. To prevail, political stability, legal certainty and attractive fiscal policy are essential.
Various current developments at federal level could put this in danger. If the Corporate Responsibility Initiative were adopted, for example, internationally active companies would be legally obliged to ensure the human rights and environmental standards of their suppliers abroad and guarantee due diligence. This could engender extra costs and, above all, legal uncertainty.

Separately, federal laws on tax reform and state pensions financing would abolish tax privileges for international companies and adapt the rules to international standards. How the legislation is implemented cantonally will be crucial to the commodities sector, along with how the funds made available to the cantons by the federal government will be used – for instance to reduce profits taxation.

London is also facing difficulties with Brexit, boosting rivals like Singapore and Dubai. The latter have been able to raise their market share in recent years thanks to strong economic growth, a growing financial sector and business friendly policies. 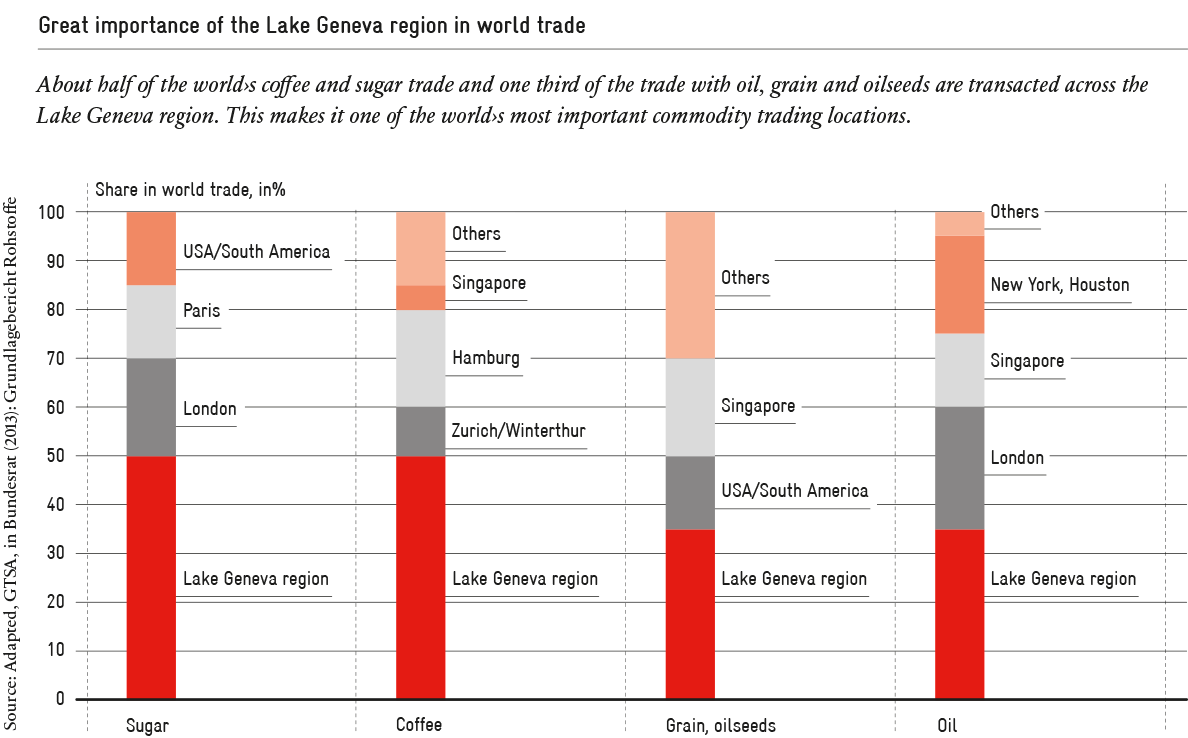 Efficiency and transparency as key elements for the future

One way to increase the Lake Geneva region’s competitiveness is through blockchain. The large number of parties normally involved in commodities, and the inherent danger of counterfeiting or fraud, make the sector ideal for blockchain technology. The later would also help to reduce, or even eliminate, the continued widespread, but time-consuming and inefficient, use of paper documents in trade finance.

More transparency about the origin of goods and greater reassurance about compliance standards could also benefit the industry’s image. Early adoption would give Switzerland a leading position and strengthen the commodities cluster through the establishment of appropriate blockchain companies.

With its blockchain cluster, Switzerland already has the knowhow and resources to exploit such synergies. The country’s ‘crypto-valley’ is no longer limited to the canton of Zug, but has expanded nationwide. But appropriate legislation is required for projects to develop as freely as possible. There must be legal certainty for the use of technology, while avoiding a bloated rule book. Separately, the cantons need to ensure that, alongside good regulation and tax conditions, they remain supportive and proactive.

The success of blockchain requires efforts by all concerned: tech companies, the Swiss commodities sector and its counterparties, and the state as regulator.

This article first appeared in “The Unique Dynamics of the Arc Lémanique”.

Author: Jennifer Anthamatten
Short Biography
Author: Jérôme Cosandey
Director for French-speaking Switzerland, Head of Research “Sustainable Welfare Policy”
Short Biography
What do you think about this topic? Give your to the authors.