The New Reality of Global Trade

Analyzing the economic consequences of the US presidential elections: A Swiss perspective

The Democratic presidential candidate Hillary Clinton received 200,000 more votes from the approximately 120 million US voters than her Republican rival Donald Trump. Despite losing the popular vote, the Republican candidate won the presidential elections with a comfortable margin, with 290 electoral collage votes against 232 for Clinton. On 20 January 2017 Donald J Trump will be sworn in as the 45th President of the United States of America. Trump’s election success surprised all political commentators and journalists, as most US and foreign observers expected an outright victory for Clinton up until the election day. While the majority of ethnic minorities and urban voters cast their vote for Clinton, Trump dominated amongst white males. Even if the majority of women voters were clearly behind Clinton, Trump pointed with huge support from white women, in both rural and urban communities.  Most US citizens critical of the general economic situation and disenchanted voters from rural areas sided overwhelmingly with the Republican Party. Additionally, three-quarters of those who described themselves as “generally dissatisfied with Washington,” gave their vote to Trump. And once again, a significant generation gap made itself noticeable – approval for Trump increased with the voters’ age. Trump sealed his election victory thanks to loyal voters over the age of 45.

No time to hesitate on foreign trade for Switzerland

One of the key features in Donald Trump’s election campaign was his fundamental criticism of liberal trade and the USA’s migration policy. He was firmly against the principles of free trade, and thus against the expansion of global value chains. Such visions – which are seemingly forgotten – have a certain tradition with the Republican Party. In 1971, for example, Richard Nixon imposed an additional 10% tax on all imports to the US, a policy that was quickly overturned. Trump’s 7-point plan is more fundamental: The plan is to gradually withdraw the US from ongoing and future negotiations on free-trade deals and act tougher on China, where unlike Switzerland, the US has no free-trade deal.

If implemented, Trump’s plans could also have significant impact on the Swiss economy, although the latter is not directly affected. The Transatlantic Trade and Investment Partnership (TTIP), the planned free-trade agreement between the EU and the USA, would surely be delayed. It is still very difficult to assess how potential delays and changes could affect Switzerland’s prosperity. Nonetheless, it is reasonably clear that these external factors would force Switzerland to intensify domestic trade policy reforms. One immediately thinks of the potential opening up of the domestic agricultural sector and the reduction of barriers on the import and export of services. Previously, it was Switzerland’s agricultural sector that was the major obstacle to a potential free-trade deal with the US. Now more than ever, it will be President Trump and his administration putting the breaks on potential trade reforms. In this new context, it is also likely that the US will retreat from its active role in multilateral trade negotiations, which spells bad news for Switzerland’s open economy. Switzerland is particularly dependent on open trade. The country’s combined trade in goods and services totaled a massive 82% of GDP in 2015, compared to a much more modest figure of 21% for the trade sector of the US economy (See graphic). 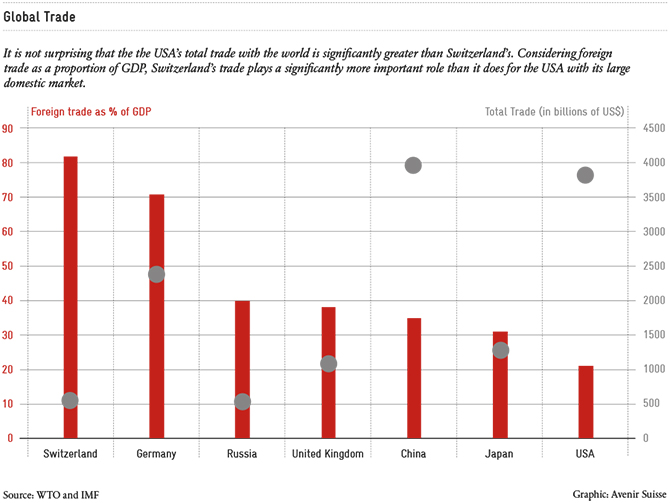 If Switzerland were to pursue a protectionist path similar to the one propagated by Trump during his election campaign, the economic consequences would be more severe due to the country’s high dependence on foreign trade. Switzerland should prepare itself to compensate for the potential lack of American input in global free trade agreements. A trade policy deadlock, however, would provide Switzerland a serious cause for alarm.

Financial markets do not like uncertainty, and the current heightened geopolitical instability will inevitably lead to short-term turmoil as investors try to navigate a path through an increasingly uncertain global economy. This was particularly reflected in Trump’s surprising election victory, leaving market observers scratching their heads about possible financial implications for an already stagnating global economy. As word of Trump’s election victory spread, world financial markets rallied. Pharmaceutical stocks surged on Zurich’s SMI, while the Tokyo Stock Exchange fell sharply due to Japan’s heavy dependence on the US as an export market. However, it is generally true that investors in stock exchanges have short memories and the increased volatility will soon subside as markets come to term with Trump’s victory. Nevertheless, given the uncertainty about the new president-elect’s economic agenda, markets will have to contend with increased financial uncertainty.

The Swiss franc is seen as a safe haven by investors in times of uncertainty and rises in value when global financial markets are under stress. The gold price should also rise in the medium and long term. A significant appreciation of the Swiss franc will ultimately be prevented by the Swiss National Bank’s (SNB) intervention policy to weaken the currency, as was already the case after Brexit. This should, at least in theory, result in a rise of foreign currency reserves for the SNB. The Swiss franc will continue to trade at relatively strong levels, putting further strain on Switzerland’s export-oriented industry.

However, the most probable scenario is that the US’s Federal Reserve Bank will forego its policy of lowering interest rates or go for a moderate increase for the first time since 2015. This course of action would be needed to instill confidence and alleviate some of the current post-election market pressure. This is not good news for the SNB since any further monetary policy normalization in the USA would have taken off some pressure on the Swiss Franc and opened more options for the SNB. The SNB’s negative interest period will have to be extended, hopefully deterring foreign investors from piling further cash into Swiss francs.

Economic power shifts at the expense of Europe and Switzerland

Asian economies would be the most obvious winners of a gradual contraction of  the US economy. American foreign trade policies can certainly slow down globalization, but will not halt it completely. Asia is poised to profit from the expansion of regional trade agreements, further securing the continent’s strategic role in driving global trade. On the other hand, the US election result is far from convenient for the EU, especially with regard to economic policy reforms. The expected depreciation of the dollar against the euro will result in lower EU exports to the USA – with Switzerland suffering similar consequences. However, one possible positive development from Trump’s election victory could be a significant lowering of the USA’s corporate tax rates. Should this reduction be implemented, Europe would become a far less attractive location for US firms. Additionally, a forced refurbishment of long neglected US infrastructure would create a short-term stimulus for the whole economy. In terms of public debt, however, such expansionary policies would place an even higher burden on the US.

While Asia will gain in trade and geopolitical significance, Russia is the real winner on the European continent. Trump’s victory may help to advance Moscow’s regional influence if the US decides to reduce its military presence in Central and Eastern Europe. Furthermore, if Trump actually decides to implement aspects of his suggested isolation policy, the global diplomatic community will no longer be able to rely on the US to serve as the world’s policeman. Europe has for far too long relied on the foreign security benefits of the Pax Americana, but will now urgently need to bolster its own investments in internal and external security. More significantly, in addition to increasing military spending, Europe needs to reform its political institutions and promote regional stability. Given the current unstable global context, a strong commitment to Europe’s “Rule of Law” is more important than ever.

It still remains to be seen what Trump’s victory holds for the future of Switzerland’s relationship with the EU. Switzerland needs to do more to secure its access to EU’s internal market and stabilize its political relationship with Brussels. Even if Switzerland is not a priority in the EU’s capital, the changing geopolitical climate and growing economic uncertainty will need to unite European countries in dealing with international issues

Institutional Advantages and Opportunities for Switzerland

Even if Donald Trump is still a month away from being sworn in as president and taking a seat in the White House, a number of critical questions need to be raised. From an economic point of view, its is almost certain that the new Republican president will not be able to deliver on his election promises to the middle class. Economic protectionism, higher minimum wages and more private debt will not spread prosperity and growth across the country. How will the shrinking middle class decide to vote in four, or possibly, eight years?

Swiss politics are not free from populist views. However, and as a result of the country’s semi-direct democracy and small-scale federalism, it is easier for decision makers to sense populist sentiments. Additionally, historically, the Swiss public has traditionally shown strong skepticism towards elites. Switzerland’s civil political structures are broad and largely inclusive. The emergence of populist movements takes much longer and does not emerge suddenly out of the mists. There is very little political space for a “Líder Máximo ” to grow as a credible alternative. Although populism will not disappear from the political spectrum, it can be isolated and monitored. On the other hand, the fears and needs of the population still need to be taken very seriously

Even if Brexit was a far more important event for Switzerland, changing the country’s negotiating position with the EU, Avenir Suisse sees Donald Trump’s election victory as a fundamental political change for the world’s economy. Brexit defied political and economic logic, but emerged from very similar populist rhetoric. The choice for Trump, however, was a political tremor of the world’s remaining superpower. The log-term consequences of Trump’s victory remain to be seen.