How Singapore Embraces the Future

Switzerland could gain some inspiration from the Asian city state

A small, prosperous, state which has become rather more of a magnet for resources than it might like; a nation united by the free will of its differing peoples; a global financial centre; a multicultural society. All these descriptions fit Switzerland as well Singapore.

That in autumn 2013 prompted Avenir Suisse and IPS to hold an initial exchange of views in Singapore, looking at the similarities and differences between the two small countries. Most recently, Avenir Suisse used the first state visit to Switzerland by a Singaporean president for a seminar at Swiss Re’s Centre for Global Dialogue in Rüschlikon to deepen discussion. Key themes included public sector administration, immigration, and urban planning. The partial attendance of President Dr. Tony Tan Keng Yam and two ministers added extra lustre.

For participants, one thing become very clear: the island state’s achievement in transforming itself, in a mere half century, from developing country into one of world’s 10 richest nations was no accident, but primarily the result of visionary leadership. And even if such a “top-down” model wouldn’t be appropriate in Switzerland, Singapore’s success nevertheless triggers some stimulating questions: 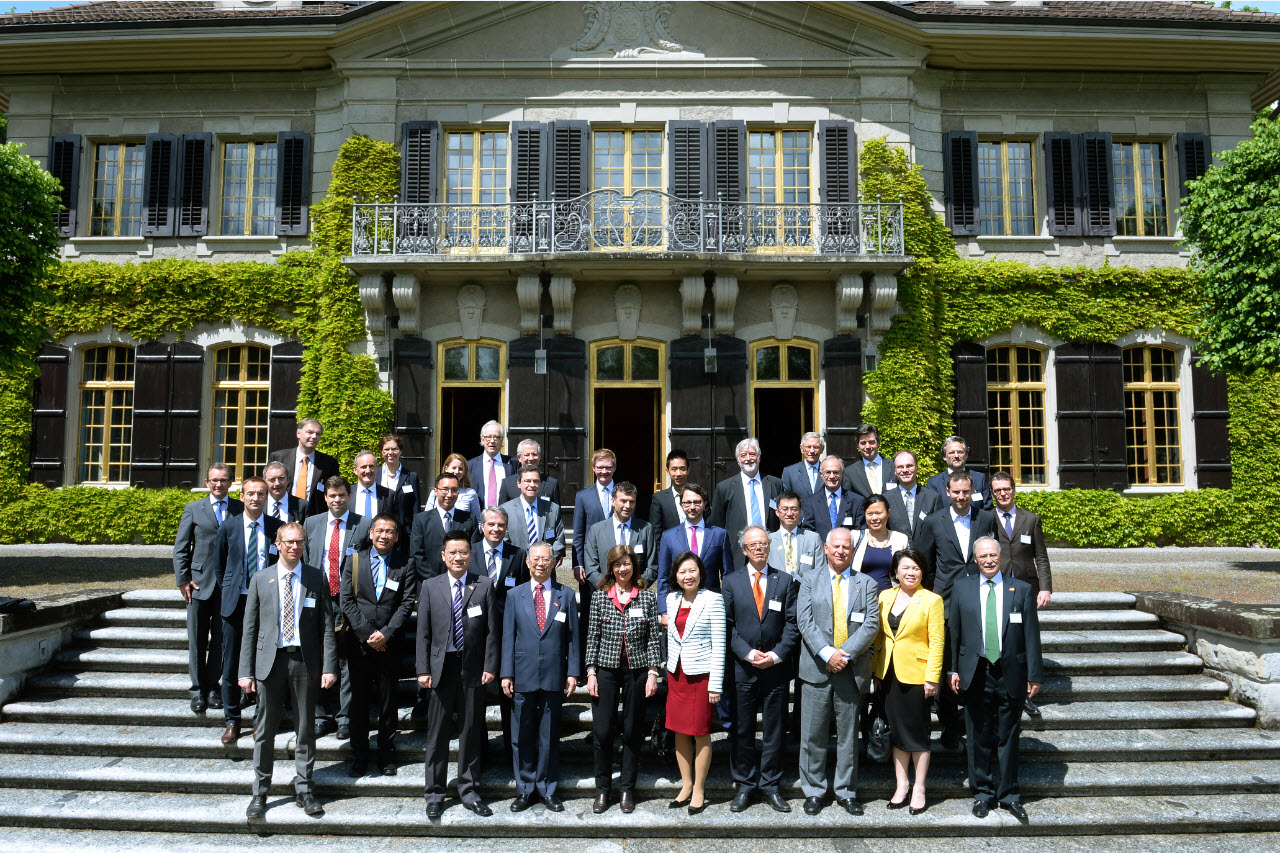 Group foto of the conference partecipants (Foto: Swiss Re Centre for Global Dialogue)

1. The power of vision

Central to Singaporean policy making has been its regular definition of targets and extremely far-sighted planning. In the 1960s, guaranteeing independence was the priority – with Switzerland, Sweden and Israel taken as goals. A decade later, raising living standards for the broad population and slum clearance were in focus. Today, an ageing population and environmental protection are priorities. With its “Sustainable Singapore Blueprint”, the city state wants to pioneer sustainable urban development.

Wouldn’t it also be sensible for Switzerland to explore its own vision for the future? Would that also not be possible in a direct democracy? Couldn’t and shouldn‘t future referendums be focused more on the broad strategic direction for the country than on income distribution?

Singapore’s civil servants are among the world’s best paid. The public administration’s website blazes: “Integrity. Service. Excellence“. Benchmarking is conducted through an annual assessment, examining performance against goals, discussing staff potential and posing the occasional offbeat question, such as: “What have you done for your country?”A deliberate policy of rotating staff through various ministries improves individuals’ awareness of the big picture. High fliers are subsidised by state scholarships, possibly including study abroad, but must in return commit themselves to work as civil servants for six years after their degrees. To offer younger staff adequate career potential, all heads must vacate their post after 10 years.

Should Switzerland’s public administration also be run more like a private enterprise? Should young civil servants be given bigger career opportunities? And is particularly high performance adequately recognised and rewarded?

3. Immigration the driver of prosperity

In south-east Asia, regional differences in income vary even more than in Europe. Accordingly, Singapore faces heavy immigration. The proportion of foreigners has risen from 10% of the population in 1990 to 29%. Today, 5.4 million people are crammed into a space only half the size of the canton of Zurich. So in Singapore too, questions are starting to be raised about the value of immigration. Officialdom, meanwhile, continues to actively stimulate popular awareness of immigrants’ significant contribution to prosperity, while promoting integration through policies mixing locals and newcomers in schools and housing.

What ways and resources might be available to Switzerland to ease the integration of immigrants and boost public awareness of their contribution to society? Are there ways to counter – while respecting civil liberties – the creation of ghettos and improve interaction between different groups?

In Singapore, land is in particularly short supply. Apart from housing, the authorities need space for infrastructure, industry and the armed forces. What’s interesting here is Singapore’s ability to plan horizontally, vertically and with a long time horizon. Skyscrapers save building land, but can retain green spaces through roof gardens. Not just pipes and cables, but roads and railways can increasingly be buried underground. Land reclamation can periodically increase the space available. When the state sells land, the building zone is limited to 99 years to give future generations flexibility to make their own decisions.

Is the significance of land, a precious commodity, not undervalued in Switzerland, which is also relatively densely populated? Might skyscrapers not allow the preservation of urban green spaces and counteract sprawl? And might a broader application of zoning rules prove advantageous to Switzerland too?

Singapore has shown a keen readiness to experiment in environmental protection. Alongside classic nature reserves – despite its small size, the city state even boasts a genuine rain forest – technology plays a big part, whether in making big buildings more “green”, as mentioned, in energy recycling, in rain water collection or at a garbage dump that, thanks to its high biodiversity, was dubbed the “Garbage of Eden” by US journalists.

Isn’t environmental protection in Switzerland too often seen as just “conservation”? And isn’t that immediately associated with hostility to technology?

“People are all we’ve got“, said one speaker. Singapore is an impressive example of the power of human creativity. A snippet more such courageous creativity wouldn’t go down too badly in Switzerland either.

Author: Samuel Rutz
Senior Fellow and Head of Program Planning and Research
Short Biography
Author: Verena Parzer-Epp
Short Biography
What do you think about this topic? Give your to the authors.

Home » How Singapore Embraces the Future