A A
Blog
Author(s): Rudolf Walser

In its Global Financial Stability Report published in mid April, the International Monetary Fund showed its unease: financing conditions worldwide had deteriorated and the reduction of non performing loans on banks’ balance sheets had faltered, leaving the banking system vulnerable. In the short term, the IMF recommended maintaining the policy experiment with negative interest rates to bolster growth. But it also warned against overburdening monetary policy in the long term. Crucial was boosting growth through fundamental economic reforms.

Money to be created just by the SNB

What was strikingly absent from the report was any mention of sovereign money – although a widely respected study (“Chicago Plan revisited”) on the subject emanated from the Fund itself. However, that study did not reflect the IMF’s official thinking – something the Swiss sovereign money initiative’s proponents prefer to forget.

They argue money should be created exclusively by the Swiss National Bank and distributed directly to the federal and cantonal governments and citizens What particularly bothers them is that commercial banks create “electronic money” (as opposed to actual cash and coins in circulation, ed) – a part of the banking system that is actually controlled very effectively by existing liquidity and capital adequacy rules. 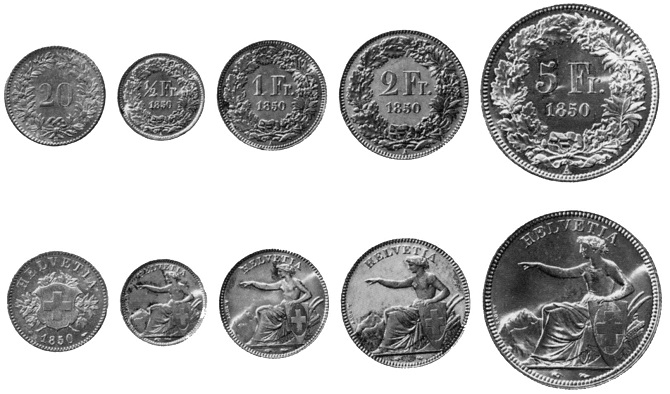 Swiss coins have been in circulation since the 19th century. That gives them a rarity value and is the result of an always prudent monetary policy. (Picture: Wikimedia Commons)

It’s about more than just the money supply

A financial system is much more than a money distribution mechanism that has to be controlled. Joseph Schumpeter, the famous economist, noted “the condition of the monetary system of a nation is a symptom of all its conditions.” By that, he meant most aspects of monetary policy find their expression in the currency: the public debt, tax, trade and competition policy – the general level of trust in the means of payment,

Jörg Baumberger, a professor at the University of St Gallen, argues every real monetary and financial system faces certain risks and uncertainties:

Sovereign money offers an answer only to liquidity and solvency risks, because it practically eliminates the dangers of a run on banks, as happened not so long ago in Greece, when deposits were withdrawn and banks had to combat the dangers of insolvency.

But it’s simply not true that a measure as intrusive as forbidding commercial banks to create money would increase the stability of the financial system. Rather the opposite: many banks would lose a key source of income and find themselves under threat as a result.

Author: Rudolf Walser
Short Biography
What do you think about this topic? Give your to the authors.