A A
Blog
Author(s): Urs Meister

St. Gallen wants to modernise its hospitals. The canton plans to spend about SFr1bn rebuilding or modernising four regional hospitals, one cantonal hospital and a children’s hospital. Emmental’s regional hospital, co-located in Burgdorf and Langnau, is also spending. Building has already begun in Langnau, while SFr145m more will go for expansion in Burgdorf. In Zurich, the Limmattal hospital intends to plough more than SFr250m into a total rebuilding. In Graubünden, about SFr400m has been earmarked to extend the cantonal hospital; Schwyz, which had been talking about closing Einsiedeln hospital, has decided instead to renovate and expand, while the hospital in neighbouring Lachen wants to spend about SFr180m on a new offshoot in Galgenen.

Such figures are no exceptions. A survey last year by management consultants PwC showed a similar pattern at 12 public sector and 7 private hospitals, with investment due to climb significantly from 2012, compared with previous years. The study showed the bulk of spending was on big projects – costing more than SF10m – while smaller schemes were, if anything, being run down. Public sector hospitals appeared to be particularly ambitious.

The trend is astonishing, given the introduction in 2012 of a new hospital financing system which, in essence, brought in a new pricing system and greater choice of hospitals for patients (including receiving treatment in other cantons). Along with more transparency in terms of quality of care, the innovations were meant to pave the way for greater competition.

The idea was to adjust the price of inpatient care to reflect hospitals’ performance via broad, diagnosis-based parameters, making it easier to compare costs and standards and helping to streamline the system by removing unnecessary beds and excessive hospital stays. More transparency and competition were intended to shake up the healthcare market and prompt structural change. Switzerland’s extraordinarily high number of relatively small hospitals is not only expensive, but can also be detrimental to care, as many smaller hospitals simply lack enough cases of a given disease each year to gain the expertise to allow the most efficient care. 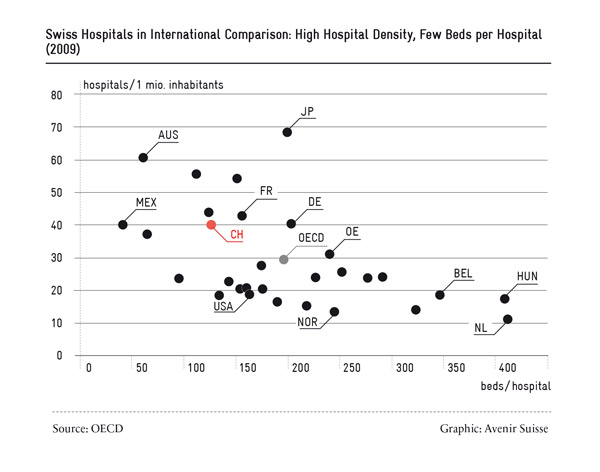 Many reasons for the investment boom

But if the new funding mechanism prompted greater competition – as hoped – the current investment boom would be strange, as hospital owners would surely be wary of risky new spending. So why the boom?

By the way, the OECD has already sounded the alarm in its 2011 report on Swiss healthcare: “Anticipated efficiency gains from case-mix payments could be compromised if cantonal governments subsidise hospitals beyond case-mix payments.”

Author: Urs Meister
Short Biography
What do you think about this topic? Give your to the authors.