The Overall Target: Less Immigration in Spite Of the Free Movement of Persons

Switzerland does not have to break its accords with the European Union on the free movement of persons to meet the aims of the “Masseneinwanderungsinitiative” (the successful February referendum on limiting immigration, ed). Instead, immigration could be curbed bindingly and durably by a 10 year “overall target” (ie. cap) on net movement. Or Switzerland could determine the number of its residents should, by 2025, not exceed a given level. If an interim assessment in 2021 showed growth was getting out of hand, pre-defined measures (quotas) would kick in. That would give Swiss business strong incentives to restrict numbers and politicians would be obliged not to stoke immigration artificially. In this way, Switzerland could probably manage to avoid abrogating its bilateral treaties with the EU while still cutting immigration and avoiding excessive bureaucracy.Avenir Suisse believes Swiss voters are not fundamentally against immigration, in spite of the February 9 referendum. Switzerland has actually benefitted from measured immigration over recent decades and successfully assimilated various waves of newcomers. Likewise, Swiss voters have repeatedly come out in favour of the bilateral treaties with the EU. Immigration-related problems in the labour market have largely failed to materialise: unemployment has not risen, wages have not dropped and there have been growing opportunities for Swiss workers.What worries Swiss voters is not immigration per se, but the speed of recent economic growth. The introduction of free movement of persons with the EU undoubtedly boosted population growth. Between 2002 and 2013, the number of permanent residents (Swiss and foreign nationals) rose by an average 70,000 a year, and between 2007 and 2013 by as much as 90,000 annually. By contrast, population growth in the preceding 20 years lay between 40,000–50,000 annually. The acceleration led to a certain “growth fatigue” – not least because symptoms, like more expensive housing and fewer dwellings, more traffic, or overcrowding and urban sprawl, were (too simplistically) blamed exclusively on immigration and economic growth, rather than misguided policies in dealing with them. Avenir Suisse reckons such factors largely explain majority support for the recent referendum.

A limit to growth, rather than bureaucracy

Avenir Suisse suggests how net immigration (immigration minus emigration) could be lowered without ditching the free movement of persons or the bilateral treaties. Switzerland could decide that its number of permanent residents should not grow to more than, say, 8.84 million or 9m by the end of 2025. Assuming moderate net new births of 17,000 a year, that would leave room for annual net immigration of about 40,000-55,000. That range would be lower than average net immigration since the introduction of free movement in 2002 (average annual net immigration between 2002 and 2013 amounted to 61,000). It would also be significantly below the average of about 75,000 in the peak immigration years 2007-2013. Avenir Suisse’s proposal of an “overall target“ covering 10 years would not, however, depend on precise annual numbers. And an alternative would be to set a 10 year immigration goal. To ensure flexibility, the targets for 2026-2035 could be recalibrated before 2024. The principle of free movement would be maintained. 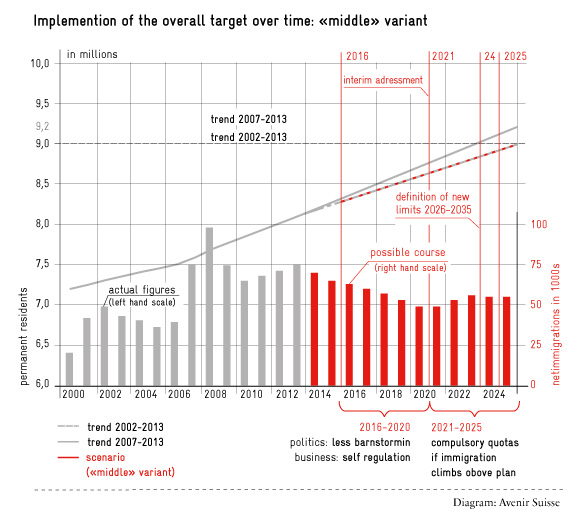 The idea of quotas creates the right incentives

In 2021, five years after the proposed new rules, a balance could be drawn. If immigration exceeded pre-determined levels, special measures would kick in automatically from 2021. These would involve fixed quotas, ensuring the long term target was not overshot. They could be set either centrally or (making more sense economically) be auctioned off. The latter would provide a strong incentive to both business and politics to act cautiously, as fixed quotas are inflexible, inefficient and subject to red tape. To prevent free-riding (for example by companies exploiting the initial period of unlimited immigration to hire unlimited foreign workers), the potential quota system that would include a retroactive element allowing some clawback. By allowing a degree of annual flexibility, Avenir Suisse’s proposal would aim to reduce net immigration without breaching the principle of free movement. The single constraint would be that, in 2021 or 2025, immigration should remain within the predetermined limits.

The advantages of overall targets

The proposal has five important benefits:

A package of measures for business and politics

Switzerland can only influence so called “pull factors“ driving immigration. By contrast, “push factors“ are given. So Avenir Suisse’s proposed “target“ system would need various accompanying measures to lower immigration without triggering quotas. Those measures would affect both the federal government and the cantons, as well as companies and business federations.

It is essential such commuters not be regarded as immigrants. They are not taking up residence, but living in their home countries, so they are not demanding living space or bringing family members. Nor do they have any significant demands on Swiss infrastructure, other than transport. Avenir Suisse is convinced cross border commuters could be an important part of the solution.

Author: Patrik Schellenbauer
Author: Gerhard Schwarz
Short Biography
What do you think about this topic? Give your to the authors.

Home » The Overall Target: Less Immigration in Spite Of the Free Movement of Persons