E-voting as a response to contemporary challenges

The Swiss have little hesitation when it comes to changing the foundations of their state. Since the revised Federal Constitution of 1999, there have already been 35 amendments.

But harnessing direct democracy has its difficulties. While e-voting would facilitate matters, media opinion appears firmly against, influenced, in part perhaps, by problems with the electronic voting system developed by Swiss Post, although its problems emerged during the review stage.

The long, long birth of the postal vote

But, when it comes to voting in Switzerland, history seems to repeat itself. Even the introduction of postal voting took years. As early as the mid-1930s, the then government wanted to allow voting by post. But parliament, fearing a loss of confidentiality and Swiss political culture, said Nein. It would take another 60 years before postal voting was accepted in 1994. Today, voting by post has become the most popular way for the Swiss to express their democratic wishes, with over 80 percent of all votes cast this way. Postal voting also helped to stop what had been a steady decline in turnout in the 20th century.

In principle, every step to lower the technical barriers to voting should be welcomed. It is in the interests of democracy that as many voters as possible exercise their democratic rights, legitimizing all decisions taken.

That also means mobilizing younger voters – namely those born in the internet age, who now communicate predominantly digitally. Even conservative bodies like insurance companies now tend to respond more often by e-mail than by traditional letter post. Lifestyles are changing with technology, and the political administration should take that into account. 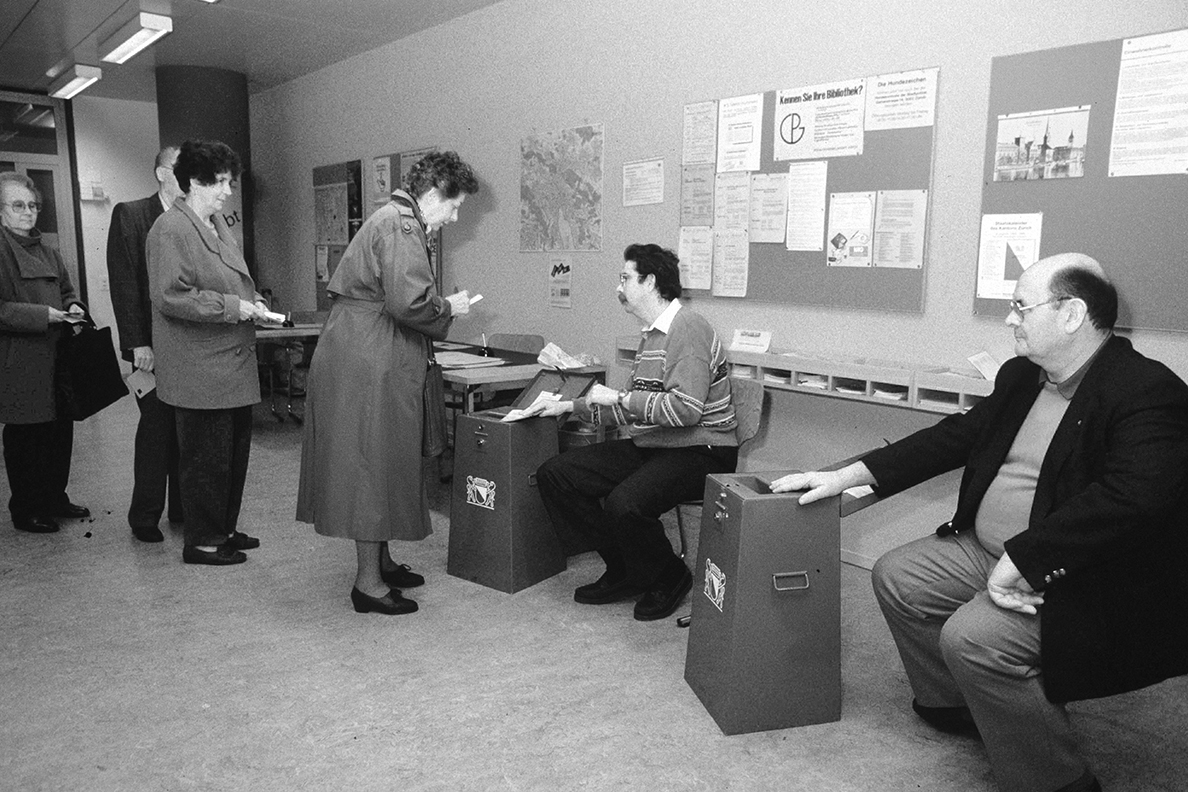 Voting like in the old days less and less corresponds to today’s reality of life. (ETH Library, Zurich, archive)

E-voting can also contribute to the quality of democracy, as defined by scope of influence. In last year’s Zurich municipal elections, almost half the ballots from the constituency of Schwamendingen had to be declared invalid, triggering serious concerns. It appeared, many voters had been willing, but unable, to express their preferences clearly enough in writing. Avoiding such muddles in future would boost democracy. Invalid ballots do not exist in the digital world.

Of course, security takes priority. But that doesn’t justify treating e-voting as taboo. Pioneering Estonia has had good experience with its e-voting system over many years. Direct democracy needs appropriate instruments to adapt to the future. Compared with the 60-year run-up to postal voting, e-voting will hopefully become commonplace more quickly. Don’t forget, when e-voting was first made available to nonresident Swiss citizens, most promptly embraced the new technology.