The fact that economic forecasts should be taken with a grain of salt has been discussed on this blog several times before with reference to the International Monetary Fund’s (IMF) forecasts of gross domestic product (GDP) growth, published every semester. This was done most recently in 2020, with interactive graphics ‒ once in general terms, still without the impact of the pandemic, and once as the first Covid mid-term review in October. Those blogposts used specific examples from various countries to illustrate how drastically reality can differ from a forecast made just a few years earlier, and what interpretations that allows.

This time we look at how these differences accumulate over time and across the globe. As a basis we take the IMF forecasts from April 2008 (at that time the financial crisis was not expected to have a significant impact on Europe), which extended until 2013. To obtain figures for 2021, the 2013 figures have been extrapolated country by country according to the economic growth forecast for the preceding two years.

The result is astonishing: global prosperity – measured in terms of global GDP – was a whopping 20 percent lower in 2021 than had been forecast 13 years earlier in 2008. Not only that, but the range between the 139 countries evaluated[1] is enormous (see chart).

Here are a few examples:

Ukraine’s economic development also fell far short of expectations in 2008 – even before the Russian attack. In 2021, the Eastern European state achieved only 44 percent of the extrapolated GDP forecast of 2008. Russia is not much better off, with 50 percent putting it in tenth-last place among the 139 countries. The war is likely to further widen the gap between forecasts and reality.

Even without wars, Greece will not even achieve half the economic output that would have resulted from the 2008 forecast for 2021. The financial and subsequent debt crisis cut increasingly deep into the development of Greek GDP (see figure below) – most recently exacerbated even further by the Covid crisis. That the prosperity of a country – and a developed one, at that – can collapse in such a way even without violent external or internal conflicts is frightening and should serve as a reminder of the fragility of our prosperity and, accordingly, of the importance of good economic policy.

China may have experienced an unparalleled ascent in the last 20 years, but the 2008 forecasts were clearly too optimistic as well: In 2021, the country achieved only 83 percent of the economic output that would have resulted from the extrapolated 2008 forecast. Moreover, given the continuing difficulties surrounding China’s spasmodic adherence to a zero-covid policy, the most drastic losses compared with earlier forecasts are still to come.

The front-runner in Europe is Ireland, whose GDP growth rates between 2015 and 2021, in some cases absurdly high, still clearly exceeded the forecasts from 2008 (despite the financial and Covid crisis). However, this GDP increase took place primarily in the books and does not reflect an actual increase in prosperity on a similar scale. This is impressively illustrated by the development of consumer spending as a percentage of GDP, which since 2013 has fallen from around 60 percent to a mere 35 percent.

At 86 percent of the 2008 forecast, Switzerland is still in the upper middle rankings. This is thanks to a significant correction by the IMF in the last few semesters: At the peak of Covid in the fall of 2021, Switzerland was still deemed to be growing less quickly (and we commented critically on this); this has since been corrected somewhat upward by the IMF ‒ also with considerable retroactive effects (see chart). 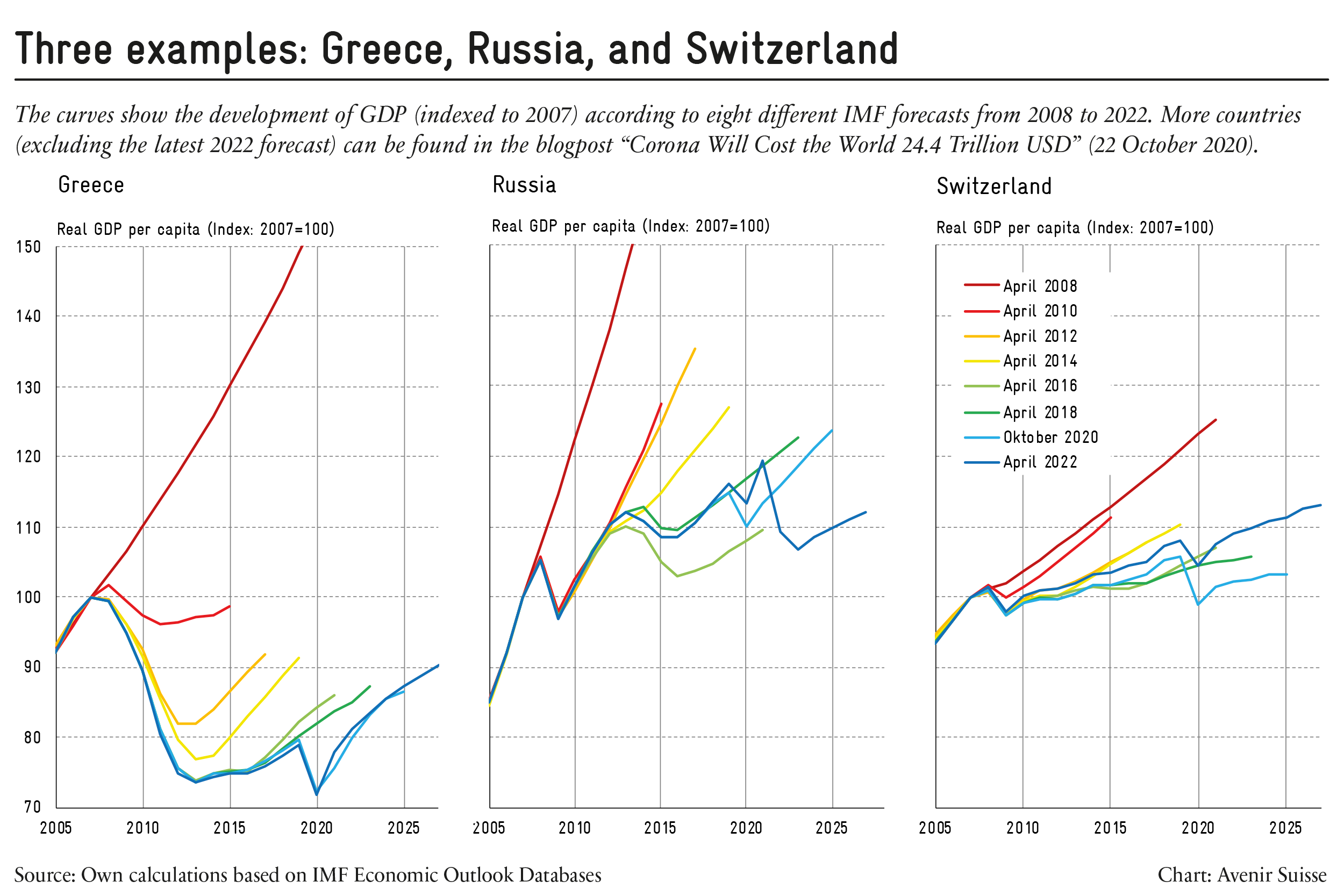 All in all, today’s global prosperity is only 80 percent of the level extrapolated from the 2008 forecast – in other words, that forecast overestimated today’s global prosperity by 25 percent. In absolute terms, global GDP is now USD 95.5 trillion instead of USD 119.5 trillion. Only 13 countries saw (slightly) more growth in wealth than predicted in 2008. The other 126 have had to live with (in some cases very sizeable) declines in prosperity compared with the forecast.

These deviations should cause quite a stir, for example in the context of the scientific literature on forecasting the extent of climate damage – discussed here three weeks ago. For a scenario without significant climate protection, the literature calculates losses of 2 percent to 23 percent of world GDP versus a scenario in which global warming can be limited to 1.5°C – not for the near future, but for the year 2100. This blogpost has shown that 20 percent can be “lost” within 13 years – without any climate catastrophe. (Environmental) economic forecasts for the distant future are therefore simply far too unreliable to be of any use in guiding action, because given the huge forecasting errors that can result for much shorter time periods, projected damage in the range of 2 percent to 23 percent of GDP for the year 2100 is simply irrelevant. This does not mean, however, that climate protection is unnecessary. It just means that climate targets should not be guided by such numbers, but – as already mentioned in the blogpost linked above – “merely” on climate models. These models may be subject to great uncertainty. But they certainly fail less drastically than attempts at economic monetization.