Swiss Multinationals in a Global Marketplace

Market capitalisation : Switzerland is one of the most important economic actors

The underestimated contribution of global companies

Switzerland has succeeded in outgrowing its limited domestic market. The country is home to various export-oriented companies that contribute extensively to its reputation as a global economic player. It is however difficult to quantify the contribution of multinationals to the domestic economy since there is no single definition to assess their global market engagement. More importantly, ‘multinationals’ have been consistently underestimated and underappreciated in their contribution to Switzerland’s economic prosperity.

According to varying definitions and measurements, multinationals contribute to between 16% and 36% of Switzerland’s GDP and nearly 40% of all corporate taxes collected. Between 11% and 29% of all jobs are attributed to multinationals. Additionally, the sector is at the forefront of innovation and entrepreneurship. Contrary to public opinion, Switzerland is much more than a country of SME’s.

Switzerland as a global corporate power

Swiss multinationals are fiercely competitive internationally corporations. The total market capitalization of Swiss-listed public companies rose from $400 billion in 1995 to $1 500 billion in 2016. Despite the country’s relatively small size and population, even in absolute terms, Switzerland continues to impress as a leading industrial economy. With similar market capitalization to India and Canada, and just slightly behind Germany, Switzerland is a global financial heavyweight. Switzerland’s financial market surpasses its Alpine neighbour Austria by a factor of 15. Much of this exceptional market growth has only come in recent years. As a proportion of GDP, since 1995 the capitalization of Swiss-listed companies has nearly doubled to 213% (2014). Only Hong Kong and South Africa top Switzerland in this ranking of market capitalization. 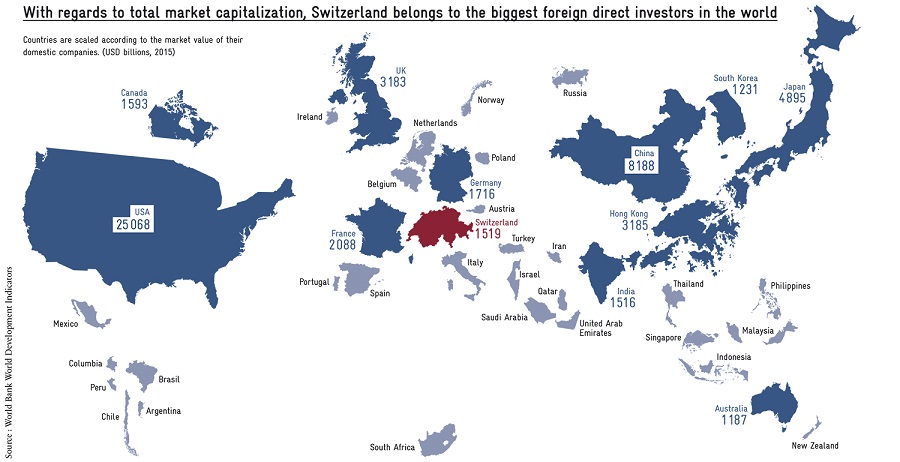 Multinational corporations chose to have their headquarters in Switzerland because of the good corporate governance practices and attractive tax legislation and not because of their obligations to their Swiss board of directors members. Quite the contrary is in fact true. A recent banking study has shown that more than 80% of shares in Switzerland’s top-30 companies are held in foreign hands.

Corporate location decisions have a major impact on future costs and revenues a firm will generate. Switzerland has profited tremendously from its long-standing commitment to global economic participation and its established position in international finance. Additionally, and equally importantly, the country economic success is based on a highly-qualified labour force, supplemented by a flexible job market and tax system. These comparative advantages cannot be created or cultivated without an inclusive federal government and prudent public investment. In many ways, the acceptance of Switzerland’s 2013 executive pay referendum (Abzocker-Initiative) was a protest vote against the country’s growing economic importance of multinationals. On the other hand, and perhaps more significantly, the outright rejection of the “End Speculation Initiative” (Spekulationsstopp-Initiative) against Swiss-based trading houses showed that Swiss voters still mistrust local solutions to global economic issues.