Not without Our Children

A A
Blog
Author(s): Marco Salvi
Title: Not without Our Children
Tags: distribution, pension system
Subtitle: Laurence Kotlikoff explains why tax reform is necessary for the good of future generations
Permalink
Print this article
Abstract
Abstract

At a breakfast event in Zürich, Laurence Kotlikoff, the US academic economist, pleaded for the urgency of fundamental tax reforms. Alongside far reaching changes to the pension system – essentially to allow a greater role for individual old age cover – his “Purple Tax Plan” for the US envisages moving to broader levies on consumption.

At a breakfast event in Zürich, Laurence Kotlikoff, the US academic economist, pleaded for the urgency of fundamental tax reforms. Alongside far reaching changes to the pension system – essentially to allow a greater role for individual old age cover – his “Purple Tax Plan” for the US envisages moving to broader levies on consumption.

Laurence Kotlikoff likes to nail his colours to the mast – ideally the colour purple. His “Purple Tax Plan” is the title of his proposal for a fundamental reform of the US tax system, presented earlier this month in Zurich at an event arranged by Avenir Suisse and the Council on Economic Policies.

A different tax base to income

Kotlikoff, a professor of economics at Boston University and one of the 25 most influential economists in the world, according to The Economist, describes his violet tax plan as a compromise between the ideals of Red and Blue – the traditional colours of Republicans and Democrats respectively. But that’s pretty much where consensus ends: the “Purple Plan” is anything but moderate.

Kotlikoff is uncompromising when it comes to the current systems, which he sees as not only unnecessarily complicated, contradictory and opaque. It also massively distorts incentives to work and save, and distributes tax revenues inefficiently. That’s mainly because of the choice of tax base – income – which he finds highly inappropriate. Taxing income, he argues, is the same as (repeatedly) taxing earnings from savings. It creates a bias towards immediate consumption and indebtedness, and a life of tax subsidised borrowing. 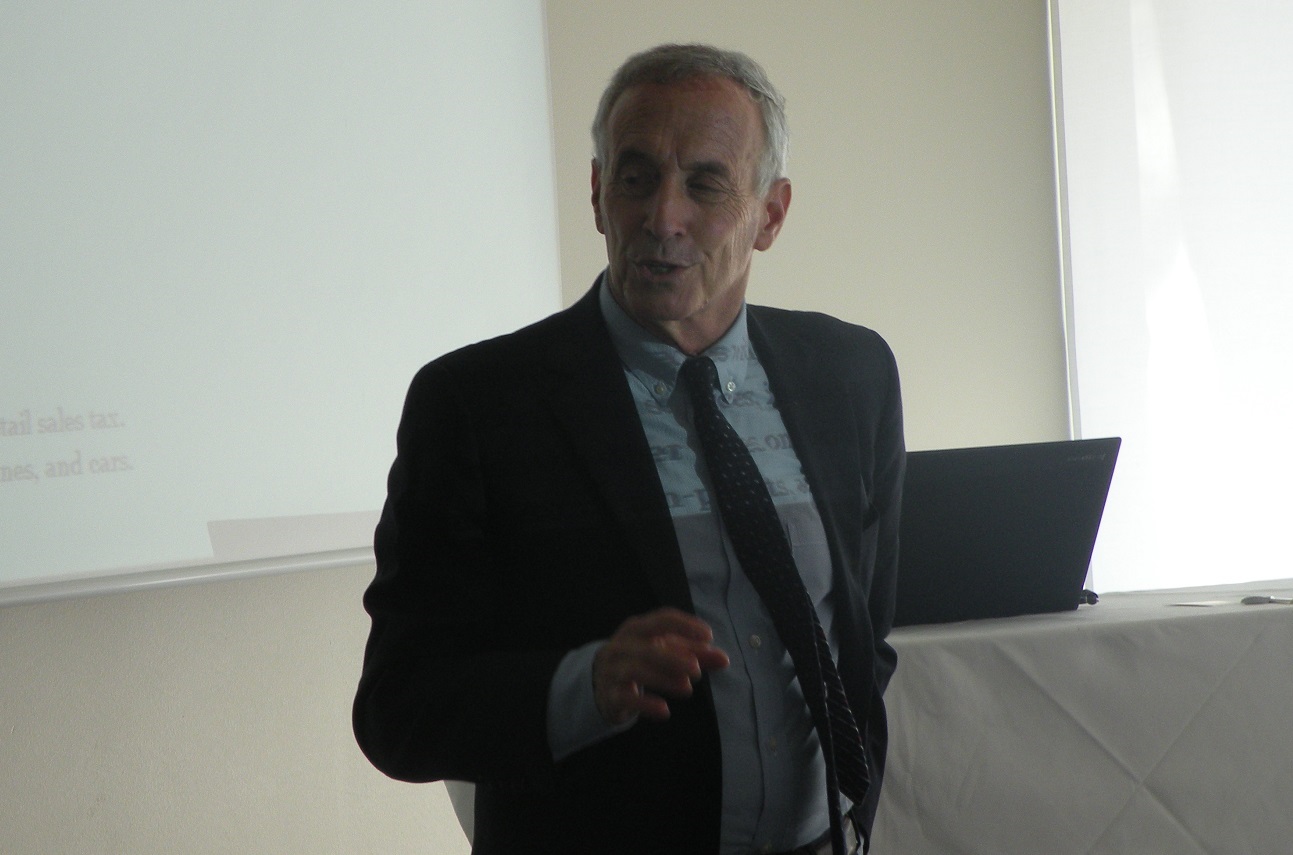 Laurence Kotlikoff would like tax reform, not least because the social security system has already made far too generous promises that it will not be possible to keep. (Picture: Avenir Suisse)

Not least among Kotlikoff’s arguments for a higher savings rate is the fact that the social security system already promises far too much – promises it won’t be able keep. He estimates the US has an implicit total indebtedness of a whopping $210trillion – double gross domestic product. Only a fraction – $13trillion – is shown as explicit public debt. The remaining almost $200trillion comprises undisclosed commitments, primarily expected additional costs for old age cover. For Kotlikoff, this indebtedness is tantamount to declaring war on future generations.

Only partly applicable to Switzerland

How should Kotlikoff’s plan be judged from a Swiss perspective? Matters here are not entirely comparable. There are certainly signs of a looming funding gap in Swiss old age care provision: a recent UBS study estimated it at 160% of gdp. But that seems manageable by international standards – albeit not without reforms.

But our tax system also has a distinct bias towards income as its base. That, as Kotlikoff criticises, favours immediate consumption and indebtedness over saving. Rather than a wholehearted and, to be honest, politically inconceivable, abolition of income tax, a milder alternative might be “only” to pivot tax levies slightly more towards consumption. A first step could be abolishing tax allowances on debt interest payments (predominantly for mortgages) while simultaneously making interest income tax free. Avenir Suisse has made its own suggestions in this direction. So the broad lines of the “Purple Tax Plan” are relevant – though perhaps in a less vivid hue.


Dr. Marco Salvi, Senior Fellow and Head of Research “Equal Opportunity Society“, is responsible for topics such as job-market, fiscal policy, gender equality and regional policy of the latin part of Switzerland. He studied economics and econometrics at the University of Zurich and holds a Phd from the EPFL in Lausanne.

More from Marco Salvi
What do you think about this topic? Give your to the authors.

Home » Not without Our Children